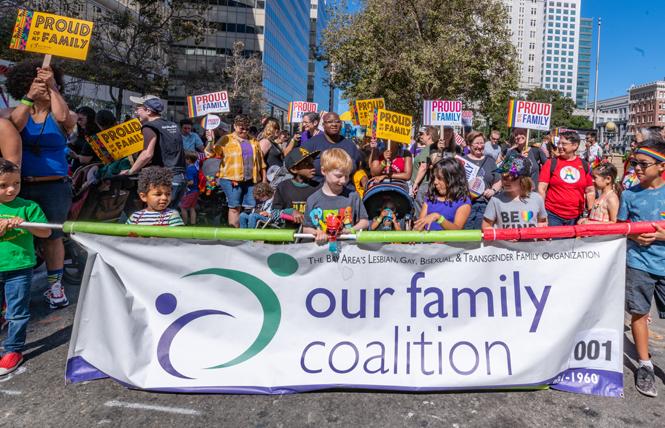 Oakland Pride is kicking off a week of virtual programming Sunday, September 6, consisting of over 32 total hours, according to Carlos Uribe, the co-chair of the organization's board of directors.

"We want to hit all the different areas of the community and have something for everyone," Uribe said in a phone interview with the Bay Area Reporter August 31.

As the B.A.R. previously reported, the in-person Oakland Pride parade and festival were to be held September 13 but went virtual due to the on-going COVID-19 pandemic.

The full lineup of events has not been announced on Oakland Pride's website or Facebook page as of press time, but Uribe said that original programming will stream from 4 to 8 p.m. Monday, September 7, through Friday, September 11, and then from noon to 6 p.m. Saturday-Sunday, September 12-13, with all of Sunday being filled by main stage performances and DJ sets.

The week will begin, however, with a stream of the final day of the Oaklash Bay Area All-Day Drag Festival from 12:30 to 10 p.m., inclusive.

The events can be viewed mostly on Twitch, Uribe said, though there will be "community Zoom rooms for virtual hangouts, cruising, and community," according to the Facebook page.

Second Oakland Trans March
Uribe said that Oakland Pride will also be livestreaming the Oakland Trans March, which will commence at 1 p.m. Saturday, September 5, at Frank H. Ogawa Plaza (also known as Oscar Grant Plaza) at 14th Street at Broadway and will proceed on a two-mile route west of Lake Merritt and north of the Nimitz Freeway before returning to the plaza.

This will be an in-person event that marchers can join either on foot or in a vehicle caravan. Masks and social distancing will be required, organizers stated.

This is the second iteration of the Oakland Trans March, which as the B.A.R. reported began last September as a way to honor murdered trans women and create visibility for trans people of color.

Socorro Moreland, a Black trans man, said that people in the East Bay wanted a trans march of their own after seeing the success of the San Francisco event.

"This is the first thing we have in Oakland for trans people, specifically," Moreland said. "We're led by young, vibrant protesters but are continuing the legacy and work of Miss Major Griffin-Gracy, one of the matriarchs of the transgender revolution in the Bay Area."

Miss Major, as she is widely known, was the founding executive director of the TGI Justice Project.

"She was with Marsha P. [Johnson] and did a lot of advocacy and activism," Moreland said. "We look up to these folks because they've not just been phenomenal in the transgender movement, but also the HIV movement, spirituality, and lobbying the halls of Congress."

Moreland said that the increase in Black Lives Matter-related activism following the Minneapolis police killing of George Floyd in May underscores the importance of the event.

Black Lives Matter very much comes out of the queer and trans Black experience, Moreland said, even as trans people continue to face discrimination by some people.

The Compton's riots, in 1966 in San Francisco's Tenderloin district saw trans people fight back against the police.

Moreland said people need to talk about the case of Tony McDade, who as the B.A.R. previously reported was a Black trans man killed by police in Tallahassee, Florida on May 27 — two days after Floyd.

(Police said McDade aimed a gun at them, though some witnesses say that is not true.)

"We also lost someone," Moreland said. "Tony McDade was a Black trans man shot and killed by police — a victim of violence and police never did anything. They shot him mind-blowingly."

The first week of September is officially designated by the city of Oakland as Transgender Pride Week, according to a copy of the proclamation signed by Mayor Libby Schaaf and provided by Moreland.

Drag shows at Oakland LGBTQ bar
Following the closure of Club 21 and BNB, the Port Bar at 2023 Broadway is one of the last LGBTQ-identified bars left in the city.

Port Bar has been open in recent months and even holding events, outdoors and with masks of course, and featuring food from Shiloh Cuisine.

Sean Sullivan, a gay man who co-owns Port Bar with his partner, Richard Fuentes, said the bar is going to add extra tables and chairs outside before Pride week.

"We're just happy people are turning out and we hope people can make the most of Oakland Pride, indoors or outdoors, in a safe and positive way," Sullivan said.

Currently, the bar's outdoor capacity is 32 people — and that number has turned out for drag shows and trivia nights, according to Sullivan. That number will expand to 38 soon and "we'll see how that goes," Sullivan said.

The bar's operating hours are Tuesdays-Thursdays 5 p.m. to midnight, Friday and Saturday 3 p.m. to midnight and Sunday noon to 8 p.m. On Sunday, September 13, however, the day will begin with two brunch drag shows, at noon and 2 p.m., to commemorate both Pride and Mexican Independence Day, which falls on Wednesday, September 16.

"In past years they've fallen at different times, but this year they're at the same time," Sullivan said.