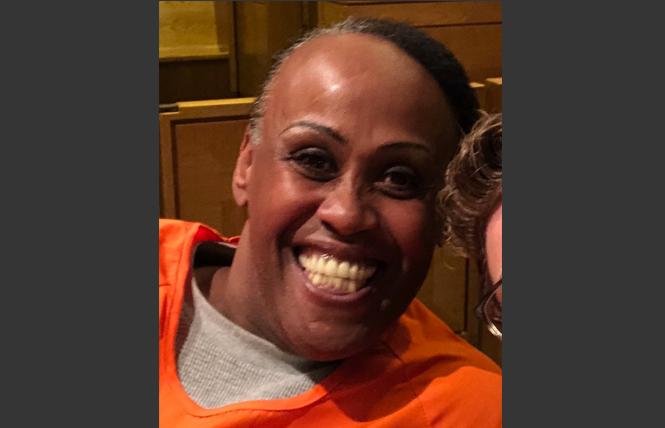 A transgender woman is suing officials at San Quentin State Prison, alleging that she was abused in custody and retaliated against with false criminal charges.

The most serious is an allegation that officials at the Marin County prison had Smith, 59, charged with a crime in retaliation for her complaints about the sexual violence and repeated harassment.

"Under the guise of a[n] investigation into the assault, defendants ransacked Ms. Smith's cell and left it open and unattended for other people in custody to steal her property," the complaint states. "Defendants then caged Ms. Smith, like an animal, verbally berated her, threatened her with physical assault, sexually harassed and assaulted her, and issued her multiple fabricated Rules Violations Reports (RVR) riddled with glaring inconsistencies and due process violations."

Smith was subsequently isolated for months, which led to two crisis bed admissions, the complaint states.

"I went to the mental health crisis bed and was totally beaten and broken," Smith wrote in a recent letter to the B.A.R. "But soon I began to realize that [if] I worked hard on myself, the world has to offer some type of relief. ... I had to believe that I deserved to be safe from sexual predators and couldn't allow anyone to abuse my body and take away what I worked so hard to accomplish in my life, so I began to fight."

Subsequently, however, according to the complaint, defendants "placed a broken piece of art in her cell inside a piece of fabric, fabricating a weapon commonly referred to as a 'slungshot.'"

"The art — a statue of a head with a graduation cap Ms. Smith's friend gave her as motivation for her to complete her GED — had been in Ms. Smith's cell for years," the complaint states. "By placing the statue in the fabric, defendants used it to fabricate a 'deadly weapon,' of which they charged Ms. Smith with possession. The resulting RVR was referred to the district attorney's office, which charged Ms. Smith with a crime that could add 10 more years of time to her sentence."

Wrote Smith in her letter: "I was targeted for reporting my fear to my mental health providers."

"Defendants' campaign of torture and retaliation against Ms. Smith sent a message to future victims, especially transgender women housed in men's facilities: do not report sexual violence or safety concerns or you, too, will be punished," according to the complaint. "Ms. Smith's case demonstrates that the 'Me Too' movement and the protections it has provided to women also needs to find its way to the violence and state-initiated torment transgender people face behind CDCR's prison walls."

The Marin County District Attorney's office confirmed to the B.A.R. July 10 that a complaint of custodial possession of a weapon against Smith was made.

Smith has been incarcerated since 1998 on a 25 years-to life sentence with the possibility of parole, according to the complaint. She is now housed at the California Medical Facility in Vacaville.

Jennifer Orthwein, one of Smith's attorneys, wouldn't state on what charge Smith was convicted around that time, saying it is not relevant to her abuse in the prison system. In her letter to the B.A.R., Smith wrote that it was for assault with a deadly weapon with great bodily injury, which she stated was in self-defense.

"I was working the streets and a fight broke out between myself and the guy I was with," Smith wrote. "He lied and said I hit him, when in fact it was the other way around. He beat me."

According to Orthwein, Smith "was on a really promising path to parole" at the time of the possession of a deadly weapon charge.

"[Smith] had just successfully completed the long-term offender program (LTOP) which is designed to prepare people with long sentences for parole," Orthwein wrote in an email to the B.A.R. "She had also recently been accepted to the California Reentry Institute — which is only available at San Quentin and provides reentry support prior to and during parole. Most who are in this program do parole; however, when Ms. Smith was retaliated against, she also became ineligible for this program and subsequently transferred out of [San Quentin]."

Smith had not had any disciplinary reports "for a couple years," Orthwein stated, adding that Smith "was in a leadership role at San Quentin prior to the retaliation."

Orthwein said in a phone interview with the B.A.R. that both retaliation and anti-trans attitudes are common in the criminal justice system.

Other allegations
Another allegation in the lawsuit is that the officials at the prison failed to protect Smith from conditions that made her vulnerable to sexual harassment and assault, which the lawsuit states constitutes a violation of her Eighth Amendment constitutional right to be free from cruel and unusual punishment.

"Plaintiff was incarcerated under conditions presenting a substantial risk to her or serious harm in the form of sexual violence as a transgender person in custody," the complaint states. "In 1998, when she was first taken into [California Department of Corrections and Rehabilitation] custody, correctional officers in the CDCR Reception Center allowed multiple men in custody to rape Ms. Smith repeatedly over four consecutive days.

"And on New Year's Eve 2013, shortly after arriving at San Quentin, Ms. Smith was attacked from behind and violently raped. While the assailant raped Ms. Smith from behind, he proclaimed, 'You know you like it!' Ms. Smith did not know the identity of her assailant at the time, which caused her to subsequently experience even more severe symptoms of PTSD, such as hypervigilance and panic attacks," the complaint adds.

"Ms. Smith has been the target of indecent exposure and lewd sexual acts by many men in custody. She has also been verbally harassed and called homophobic and transphobic slurs by staff — including medical and custody staff — on numerous occasions," the complaint continues.

Smith wrote in her letter to the B.A.R. that these incidents took a toll on her mental health.

"After the shock of being sexually abused and harassed, I felt like killing myself," Smith wrote. "I wanted to believe that [Prison Rape Elimination Act officials] would work for me, and I had a request to finally be safe."

The second count alleges a violation of Smith's 14th Amendment right to equal protection of the laws.

"Under the Equal Protection Clause, discrimination based on transgender status is presumptively unconstitutional and subject to strict scrutiny," the complaint states. "Defendants discriminated against and harassed plaintiff because she is transgender and/or because of their sex-based stereotyping that transgender people intentionally make themselves targets for sexual violence and/or make false complaints."

According to Freddie Francis, who does communications work with Medina Orthwein, transgender people in custody are subjected to sexual violence and assault much more than non-trans people. Francis cited a study showing that 59% of trans people incarcerated in California have been sexually assaulted while in custody, compared with about 4% of the general population.

"The data shows us trans women are particularly susceptible to sexual assault in prison," Francis said in a recent phone interview with the B.A.R. "This is no safe place for anyone."

The third count alleges another violation of Smith's 14th Amendment rights. It states that prison officials disciplined Smith without going through the proper channels.

"This is not an isolated incident in terms of the way it was handled," Orthwein said. "It's a systemic problem and it's pretty common that complaints are handled in this way."

Indeed, Smith is one of several trans prisoners who in recent years have alleged violations of their rights.

Even though Smith began transitioning before her prison sentence, she has spent her entire term incarcerated with men, as is the state's policy. A bill authored by gay state Senator Scott Wiener (D-San Francisco) aims to allow trans women to be housed with cis women.

Smith believes that in the end, she will get justice.

"I have been sexually assaulted in prison many times and custody did nothing to help me," she wrote. "I have to believe I will get justice and I will see parole before I die."

Terry Thornton, a deputy press secretary with the CDCR stated to the B.A.R. that it "cannot comment on pending litigation."

"I can tell you that CDCR is committed to providing a safe, humane, rehabilitative, and secure environment for all people housed in the state's correctional facilities and has policies, practices and procedures in place regarding the screening, housing and treatment of incarcerated transgender people. CDCR maintains a zero-tolerance policy for sexual harassment, sexual violence, and staff sexual misconduct," Thornton wrote in a statement.

"This policy applies to all offenders, all CDCR employees, all volunteers and all contractors. Moreover, the Prison Rape Elimination Act (PREA) drives all of CDCR's efforts to combat sexual abuse and sexual misconduct," Thornton added.