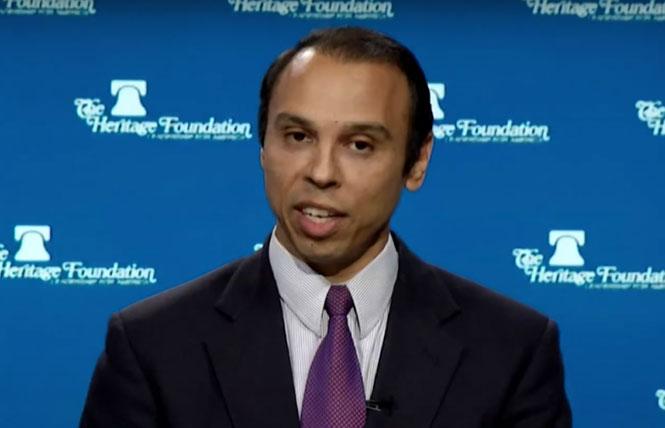 HHS official Roger Severino is alleged by LGBT rights groups to be behind a rule change that would deny LGBTs protections under the Affordable Care Act. Photo: Courtesy CNN

The U.S. Department of Health and Human Services is moving to promulgate proposed changes to non-discrimination regulations that would effectively strip LGBTQs from protection under federal law.

At issue are Obama-era HHS regulations based in Section 1557 of the Affordable Care Act, which prohibits health care discrimination on the basis of race, color, national origin, sex, age, or disability.

HHS later declared a rule stating that discrimination on the basis of sex includes LGBT identity, a claim that as the Bay Area Reporter previously reported is currently being adjudicated by the U.S. Supreme Court vis-à-vis the ban on sex discrimination in the Civil Rights Act of 1964.

However, a federal judge in Texas, Bush-appointee Reed Charles O'Connor of the U.S. District Court for the Northern District of Texas, said that this was not a correct reading of the law. The Trump administration, rather than defending the pro-LGBT regulations in court, began drafting new HHS regulations in accordance with the ruling.

As of April 24, HHS is days away from changing to the new rules that do not protect people on the basis of their sexual orientation or transgender status.

In this age of congressional gridlock, many new developments in federal law come from these kinds of legal battles between agency rules and court decisions, with the battle lines being drawn between the occupant of the White House and the broader political philosophies of the judges considering the case.

Sasha Buchert, a trans woman who is a senior attorney with LGBT rights group Lambda Legal Defense and Education Fund, said in a phone call with the B.A.R. April 28 that the Trump administration is trying to change as many pro-LGBT executive branch regulations as it can.

"They assume, understandably, that they are going to lose the White House," Buchert said, referring to the November election.

Just last year, Lambda Legal joined the San Francisco City Attorney's office in successfully suing HHS over a Trump rule that would have allowed people working in health care broad license to refuse to serve people on the basis of their own religious convictions.

The so-called refusal rule was struck down in multiple federal courts.

The refusal rule could have applied, for example, to ambulance drivers who could refuse to take a woman to a hospital if they knew she was going to receive an abortion there — or for another reason, such as the transgender status of a patient.

The San Francisco City Attorney's office "submitted formal complaints to the federal government opposing this rule change," according to an April 28 email to the B.A.R. from communications director John Coté.

City Attorney Dennis Herrera and Mayor London Breed are signatories on a 2019 complaint to HHS that called the proposed rule changes "deeply troubling."

"The proposed rule is yet another in a series of attempted actions by the Trump administration to bypass federal law and roll back protections of vulnerable populations that Congress has adopted," the new complaint states. "The proposed rule would entirely eliminate protections against discrimination on the basis of gender identity and sex stereotyping, erasing the 2016 regulations' explicit protections for transgender and gender-nonconforming individuals."

Buchert said that Lambda Legal has "begun to look into whether to file a lawsuit," but at the moment is still in talks with the federal Office of Management and Budget.

"We've been wrestling with the rule. We've been expecting this for months and are looking at all options," Buchert said. "We've met with OMB before this was announced and put in a request to meet with them again about the harm to LGBT people, women, and people with disabilities."

Buchert said that changes in HHS rules are being pushed by Trump's head of the office of civil rights within the department, Roger Severino, who has been described by the national LGBT group Human Rights Campaign as a "radical anti-LGBTQ activist."

Severino worked at the conservative Heritage Foundation's DeVos Center for Religion and Civil Society immediately before his HHS appointment, in which capacity he criticized the Obama-era interpretation of Section 1557.

A 2016 Heritage Foundation publication Severino co-authored states that "gender identity and sexual orientation ... are changeable, self-reported, and entirely self-defined characteristics," and thus shouldn't be considered alongside immutable characteristics such as national origin or race.

"He's the mastermind behind all of this," Buchert said. "No agency, in my opinion, has tried to do more harm to the LGBT community than HHS."

Severino stated to other news organizations last week that changes in policy are merely intended to interpret Section 1557 as it was passed by Congress and signed by then-President Barack Obama, who "declined to recognize sexual orientation as a protected category under Obamacare," Severino said. Rather, the Obama administration interpreted "sex" to include LGBTs.

After the initial publication of this article, Severino issued a brief statement to the B.A.R.: "As we have shown in our recent efforts to protect persons from disability and age discrimination during the pandemic, HHS will vigorously enforce civil rights laws as passed by Congress, before, during, and after any rulemaking."

"A federal court has vacated the gender identity provisions of the regulation and we are abiding by that court order. Additionally, the Obama administration declined to recognize sexual orientation as a protected category under Obamacare, and HHS proposed to leave that judgment undisturbed," the spokesperson stated. "We do not comment on the rulemaking process and refer you to recent public filings made by the Department of Justice before the Supreme Court on what constitutes sex discrimination under civil rights laws."

Still, Buchert and others hope that changes don't lead to a "chilling effect" in LGBT access to health care — in the middle of the global novel coronavirus pandemic that at press time has killed more Americans than died in the Vietnam War.

As the B.A.R. previously reported LGBTs may be at greater risk for contracting and having adverse reactions due to COVID-19.

Americans United for the Separation of Church and State said that, ironically, the HHS change may actually harm religious freedom.

"Rather than improving access to health care in the midst of a public health crisis, the Trump administration is poised to create more barriers and invite more discrimination in the health care system, which will be especially harmful to women, LGBTQ people, people of color, and others who already face hurdles accessing care," Maggie Garrett, the group's vice president of public policy, stated in an email to the B.A.R. April 28. "This rule will also advance the administration's agenda of misusing religious freedom by including a sweeping religious exemption, but religion cannot be used to deny people access to necessary health care."

"This undermines our constitutional promise of religious freedom, which guarantees the right to believe, or not, as we choose — as long as we don't harm others," she added.

Updated, 4/28/20: This article has been updated to include a response from Mr. Severino.