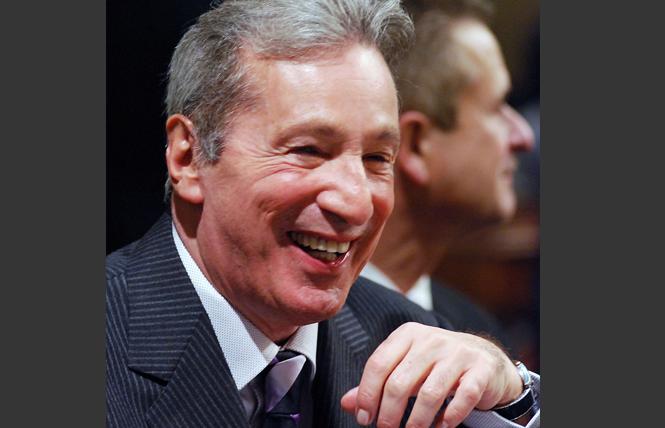 After a while, I hooked up with somebody. He was a teacher too. We moved in together. It was a furnished apartment on 16th Street between Market and Divisadero. The rent was $145 dollars for both of us, furnished. It was owned by an old semi-alcoholic retired fireman. Apparently, they had a lot of real estate in those days. He never said shit to us. I mean it was so obvious, right, we were gay? He was always slow to fix the toilet and I was angry about that. I thought, for $145 a month you should fix the damn toilet! Now $145 a month in San Francisco barely pays for toilet paper.

I found a lot of racism in the bars in the Castro. They had three rules. One was no hats. What? Yup. Believe it or not that rule was somehow supposed to keep out black people. Another rule: No open-toed shoes. That rule was supposed to keep out women. Another rule: Triple-carding. If they didn't like the way you looked, they would ask for three forms of ID. What lunatic carries around three forms of ID?

I used to do a joke: "I was in the Castro, you know — one thousand fags, one hundred stories. I saw somebody get hit by a car. Before deciding whether to care the queens asked, 'Is he white?'" Some people didn't like that I did that joke. A little too on the money perhaps? Another one — "The Elephant Man tried to get into Toad Hall Bar in the Castro. They said 'three forms of ID please.' He said, 'I am not an animal! I am a human being!'" In today's world it would be, "I am not an algorithm!"

That's the kind of thing that fed my comedy really. I was like, this is gay liberation? Because I'm not feeling it.

One day I was walking down the street and saw a flyer. It said, "Are you tired of racism and discrimination in the Gay Community?"

The flyer said, "Come to this meeting." I went. The meeting was organized by a white man named Howard Wallace and an African-American guy, Claude Winn. That's where I met Hank Wilson and all these other incredible justice warriors. The meeting was in a church. The topic was, "are you tired of being treated this way in San Francisco gay bars?" I just connected to it.

I didn't know what I was getting into. A lot of it was sectarian, very left. I didn't know shit about any of that. I didn't know about Prairie Fire or the ones with the newspapers at the time, the Revolutionary Communist Party. They had, for lack of a better term, infiltrated that group. Howard and Claude — we used to call them Harold and Maude — were very charismatic.

Out of that organizing came something called BAGL: Bay Area Gay Liberation. It only lasted one year because there was too much sectarianism. I had no idea. And I would make jokes like "Tight Trotsky butts and broad Stalinistic shoulders." But BAGL did inform me a lot. People like Hank Wilson and I eventually got shunned. Some were not gay, they were just there to propagate ideologies. Then they had study groups — I hated that. I left and went to a bar. Then they had "self-criticism time." I spent about two minutes there and left. I just said, "Sorry I can't do this" and left. People would come up to me later and say, "We're so glad you said it. We were feeling that too." I had no idea about the issues with the left. I didn't even know if I was left. I didn't know what I was. But the issues that were identified resonated with me, especially the class stuff.

What I found out — a friend told me this and it just clicked — was that a lot of people are very threatened by smart working-class people. I didn't know that was the case. I didn't even think I was smart. So we formed the Gay Teachers out of that anger. Other gay teachers were the worst — they were terrified of us.

Ron Lanza, Hank Wilson, and I were the founders of the Gay Teachers. We only had about eight people. Ron quit teaching. He was like Mr. Cool, the teacher with the ponytail out in Walnut Creek. His students loved him. But he took a stand about them not allowing a gay speaker and he quit. Hank had taught school down south.

It was just us. Hank had no shoelaces in his shoes. Ron had his ponytail. I was me. I asked my friend Yvonne Goldin, an activist teacher who was very political and media savvy, "The school district won't let me advertise a Gay Teachers meeting in their newsletter. How do you have a press conference?" She said, "You write 'who, what, when and where' and you give out flyers." I didn't know how to do any of that.

We had mimeographs in those days. There were no Xeroxes. So we got covered in ink from the flyers. The flyers had misspellings. I went to the Chronicle, I went to the Examiner. I went to the TV stations. We just dropped all the press advisories off. Then we had our press conference.

Well, some of the mainstream press did call us up. They were assholes, totally snide. The only one who gave us a decent interview was Belva Davis, a TV newsperson. She was one of the only black women on TV then.

I was so shocked by my first TV interview. I didn't know what I was doing but it's like a lot of times with teaching — if you have high expectations of kids they'll get there. Belva interviewed me like I was a real person and I responded to that.

Hank later said to me, "You know you were really good." Because usually what I did when I was upset about something was rant: "Fuck you, fuck you, fuck you." Instead, because Belva treated me like a human being in the interview, I said, "I know that a lot of people are disturbed by this issue, but I've been a successful teacher for seven years so why does my sexual orientation matter?"

Then Jim Wood from the Examiner interviewed me. He was a nice guy but I was nervous about the interview. The next day the Examiner didn't come out until the afternoon. After it did, my friend John Patrick Quinn, who had been a teacher too, called me and said, "Holy shit! You're on the fucking front page of the Examiner!" I said, "You're kidding!" We lived at 29th and Mission and I couldn't find a newsstand anywhere in the neighborhood. I had to go all the way down to the Financial District. When I finally got one I opened it and there I was on the front page of the newspaper with a bad perm. I thought I was Abbie Hoffman or something. The headline read: "Gay, Closeted, and Proud." Pretty good, right? The article was favorable. God love Jim Wood. I said to nobody in particular, "Well, I guess I'm out now?"

An exclusive excerpt from Chapter 3 of Tom Ammiano's new memoir, "Kiss My Gay Ass: My trip down the Yellow Brick Road through activism, stand-up, and politics," published by Bay Guardian Books in April 2020. Used with permission. To order a copy, go to www.kissmygayass.com