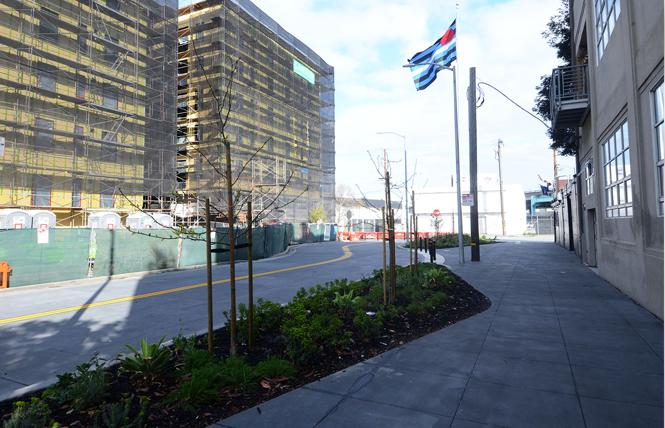 The first half of San Francisco's under-construction plaza dedicated to leather culture is now accessible to passersby on foot or bicycle. The remaining section isn't expected to be complete until late April or early May.

But due to the novel coronavirus outbreak, and the imposition of a shelter-in-place order for city residents through at least May 3, it is unclear when a dedication ceremony can be held for what is the world's first public parklet honoring the leather and kink communities.

"We are planning to push our celebration back from April to mid-May (this is a placeholder and will need to be confirmed)," Mark Bonsignore, a parks and place project manager with the San Francisco Parks Alliance, told the Bay Area Reporter this week. "The Friends of Eagle Plaza (FoEP) have been finalizing the group's bylaws and fiscal sponsorship and should have more information on grand opening in the coming weeks."

The $1.85 million project, which is turning a portion of 12th Street in the city's South of Market neighborhood into a community gathering space, has run into numerous delays since it was first proposed by the owners of the Eagle gay bar after which the plaza is named.

The new public open space sits in front of the business, now shuttered due to the health pandemic, on 12th Street between Harrison and Bernice streets. Place Lab, started by Build Inc. and now part of the nonprofit parks alliance, oversaw the design of, and permits for, Eagle Plaza.

The local development firm is constructing the approximately 12,500 square foot plaza as part of a $1.5 million in-kind agreement with the city for approval of its mixed-use development across the street from the Eagle bar on what was a surface parking lot. The 136-unit housing development at 1532 Harrison Street cannot open to residents until Eagle Plaza is built. 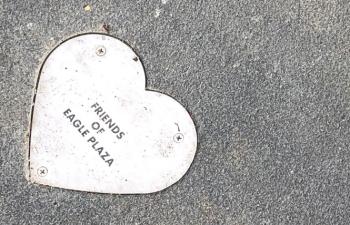 Lots of red tape
As the B.A.R. has chronicled, bureaucratic disputes over the design of the plaza dragged out the permit approval process for years. Last February, Mayor London Breed stepped in to push the project forward.

Construction on the plaza finally broke ground in June, and one of its signature features, a flagpole bearing an oversized leather flag situated along its Harrison Street entrance, was dedicated in late September. Approaching the area from South Van Ness Avenue along 12th Street, it is quite a sight to see the gigantic symbol flapping in the wind.

It had been initially hoped the plaza would be complete by the end of 2019. But a series of rain showers threw that timeline into disarray. Thus, Build revised its schedule with the intent of opening the plaza in stages throughout the first quarter of 2020.

The first section to be completed was the southern sidewalk adjacent to the Eagle bar and reshaping the roadway. Rather than completely shut down that block of 12th Street to traffic, it will remain open to vehicles in both directions via a curving, 28 foot wide two-lane roadway through the plaza.

While it will allow for adequate access for fire trucks and other safety vehicles, it resulted in a scaled down proposal for the plaza. Bollards, most of which are now in place at the site, will be used to close off the street at both ends for special events.

By early April, 18 of 40 planned heart plaque commemoration pieces will be installed within the southern sidewalk of Eagle Plaza, said Bonsignore. A number are already embedded into the sidewalk, though only one for the friends group has been engraved.

That side of the plaza also now sports two planted areas, with the one nearest the entrance to the Eagle sculpted into a slight hillock. The street is still closed to vehicle traffic while work on the northern side of the plaza is underway.

Eagle Plaza is situated within the boundaries of the LGBTQ Leather Cultural District that city officials created in western SOMA. The parklet will serve as a focal point and main gathering spot for the cultural district.

The Friends of Eagle Plaza group is aiming to raise $150,000 to pay for furniture and other decorative elements of the parklet. Its website still states it needs roughly $30,000 to meet its goal, and there are about 22 heart plaques people can still sponsor at between $2,500 and $4,999 and have their name featured on them.

For more information, and to donate, visit http://www.eagleplaza.org/