Mumbai Pridegoers arrested for speaking out against Indian government 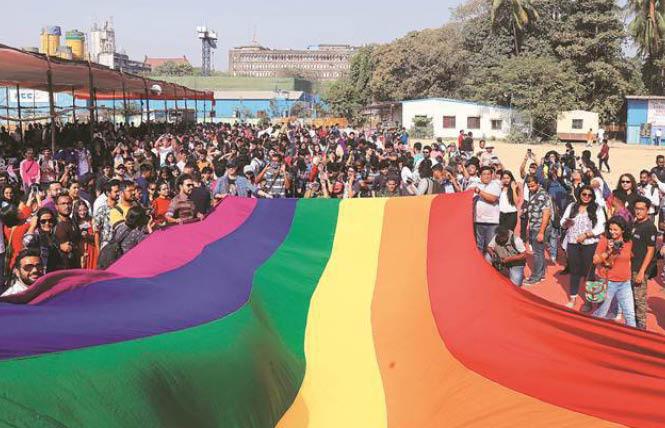 More than 50 people were arrested and charged with sedition at a downsized Mumbai Pride February 1 after police attempted to cancel the annual celebration for the first time in 12 years.

Mumbai police nearly shut down the event due to safety concerns after receiving an anonymous message that protests against the Indian government would take place.

India has been rocked for more than a month by deadly protests against the Citizenship Amendment Act and the proposed National Register of Citizens. Nearly 30 demonstrators have been killed due to police violence.

Organizers saved the Pride event through negotiations, agreeing to encourage attendees to keep slogans to LGBT rights and holding the event in a smaller venue.

Mumbai police couldn't stop protesters from speaking out against CAA-NRC. The demonstrators were arrested for raising slogans in support for Sharjeel Imam, a Jawaharlal Nehru University student who has protested vigorously against CAA-NRC. Imam was arrested January 28 for sedition.

Pride organizers attempted to retain the protest spirit of Pride, but in the end ceded to police demands and distanced themselves from the anti-CAA-NRC protesters.

"We would like to reiterate that permission was granted by Mumbai Police on express conditions, which we communicated to all the attendees and visitors one day before, through social media channels," organizers told the Wire.

"In a democratic country it's our legal right to protest, assemble, and march. And it's their legal duty to protect and enable us to do so. CAA-NRC are also queer issues. Hence, we cannot shy away from them. And cancelling the march in the name of our safety is definitely not the answer," Saakshi Juneja, co-founder of Gaysi Family, told First Post.

Sridhar Rangayan, a filmmaker and activist, called the move a "severe blow to freedom of expression."

"Their fear of the Pride parade including protests about CAA-NRC is actually well-founded as they affect queer people for sure, especially persons who may not have their identity papers in place because they are in the process of transitioning. Their rights cannot be denied," said Rangayan.

It's estimated that more than 2,000 transgender individuals have been excluded from the list of National Register of Citizens of Assam, reported First Post.

The Bay Area Reporter recently traveled throughout India for five weeks, speaking with Indian LGBT community leaders and members about its movement. A series of articles focused on LGBT rights in India will appear in Out in the World throughout the year.

Pompeo tweeted that the State Department was taking action due to Makonda's involvement in gross violations of human rights, which included the "flagrant denial of the right to life, liberty, or the security of persons," according to a statement. The statement also noted Makonda's implication in "oppression of the political opposition, crackdowns on freedom of expression and association, and the targeting of marginalized individuals."

While Pompeo banned Makonda, he snubbed Ukrainian LGBT activists during his visit to Kyiv last week.

The ban came a few days before Human Rights Watch released, "If We Don't Get Services, We Will Die: Tanzania's Anti-LGBT Crackdown and the Right to Health," published February 3.

In 2018, Makonda, the regional governor of Dar es Salaam, Tanzania's capital city, announced a 17-member surveillance force dedicated to identifying and prosecuting LGBT Tanzanians, along with prostitutes and perpetrators of online fraud.

Global outcry caused Tanzanian officials to immediately disassociate themselves from Makonda, but the 112-page report documents government-led institutionalized homophobia since 2016, a year after President John Magufuli came to power.

The report cited the April 2019 deregistration of the Community Health Education and Advocacy Services for "promoting unethical acts." CHESA was the leading health advocacy organization for LGBT people in Tanzania. Last September, the deputy home affairs minister called for arrests of LGBT people in "direct contradiction to the government's commitment," according to the report.

Homosexuality is illegal in Tanzania under the country's colonial-era anti-sodomy law and it is socially taboo. However, until recent years the law wasn't enforced, according to LGBT Tanzanian activists. Individuals charged with sodomy face up to 30 years in prison.

Makonda has been one of the most ardent foot soldiers for Tanzania's anti-gay campaign, launching three reported attacks terrorizing the country's LGBT community, along with neighboring Zanzibar, a resort island off the Tanzanian coast.

The State Department wouldn't provide further clarification of what prompted the response beyond stating officials had "deep concern about deteriorating respect for human rights and rule of law in Tanzania."

Ukrainian LGBT activists aren't getting the same concern about violence against the Eastern European country's LGBT community and Ukraine officials' lack of response to ongoing attacks.

The activists from PrideHub, a community center in Kharkiv, nearly a seven-hour drive from Kyiv, said they would have liked the opportunity to show Pompeo documentation of the homophobic threats, beatings, and attacks on their center that they've endured for the last three years.

No explanation was provided by the department about who was invited to the meeting.

The police allege the men were celebrating a same-sex marriage and charged them with being "homosexual delinquents" and for participating in a "ceremony of debauchery."

Homosexuality is illegal in Mauritania, a Muslim majority Northwestern African country, where Sharia law is practiced.

The men remain in custody. No trial date has been set.

The men could face the death penalty if convicted, though Amnesty International told ABC News that executions haven't been carried out in more than a decade.

Study: Gay men are disliked more than lesbians
A study conducted by psychologists at New York University discovered that lesbians are more accepted around the world than gay men.

The study was published by the Social Psychology and Personality Science journal in December, reported NBC News.

The psychologists explored attitudes toward non-heterosexual men and women in 23 Western and non-Western countries.

"We found that gay men are disliked more than lesbian women in every country we tested," the researchers reported in the study.

The trend across countries tended to be driven by men's views on homosexuality with the exception of Poland, Hungary, and Russia, where women also held negative views of gay men, the study found.

The researchers found that "attitudes toward sexual minorities are robustly related to beliefs about the gender system, more broadly."

Gender systems refer to the binary male and female and associated cultural and social gender roles. Prejudice toward gay men is "part of the social construction of what it means to 'be a man'" in many Western countries, according to the report.

However, the researchers found that strong gender norms, such as in China and India, equated to greater tolerance of LGBT people as opposed to Western cultures in the Americas and Europe.

Updated, 2/11/20: This article has been corrected to include that Sharjeel Imam was the Jawaharlal Nehru University student who was arrested.