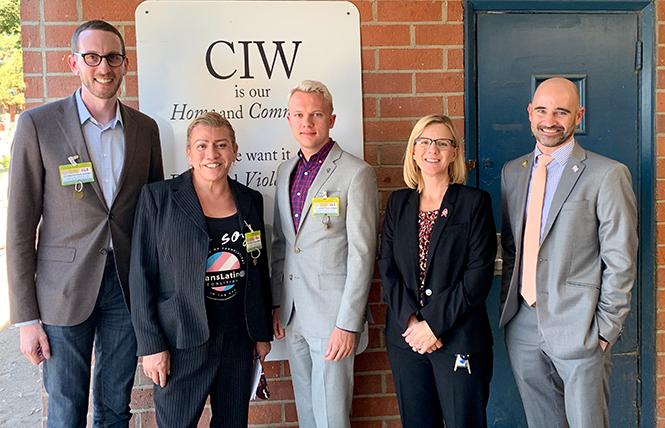 The new year will bring renewed efforts to see California lawmakers pass a trio of important LGBT rights bills that were tabled for various reasons in 2019. The legislation aims to improve the living conditions for transgender inmates, curtail unnecessary medical interventions on intersex youth, and end the placement of LGBT minors engaged in consensual intercourse on the state's sex offender registry.

During a recent editorial board meeting with the Bay Area Reporter, Wiener expressed confidence in seeing his legislative colleagues pass all three of the pending bills as he has been working to address the concerns lawmakers had raised about the various pieces of legislation.

In the case of his Senate Bill 132, the Transgender Respect, Agency and Dignity Act, Wiener spent the fall visiting with inmates, both transgender and cisgender, at prisons in Southern California and the Bay Area to listen to their concerns about his legislation with the intent of fine-tuning it as it again faces legislative review.

Despite estimates that it will result in "potentially major" costs for the state's prison system, the California Department of Corrections and Rehabilitation is supportive of the bill and has worked closely with Wiener on its language. Also included in the bill would be a requirement that transgender inmates be referred to by their preferred pronouns, gender, and name.

Based on those conversations, Wiener said he doesn't expect to make any significant changes to his legislation and only a few minor tweaks. With other legislative priorities eating up lawmakers' time, the decision was made to hold off on the bill until 2020.

"We just said let's hit the pause button and we'll pass it next year," explained Wiener in his December meeting with the B.A.R.

The bill aims to include a "Romeo-Juliet" clause for gay and lesbian teenagers so they are treated similarly to their heterosexual counterparts. For example, it would prevent gay male adolescents from having to be listed on the state's sex offender registry for sleeping with a boyfriend under the age of 18.

While an 18-year-old boy or girl who has sex with a 17-year-old partner could still be prosecuted for statutory rape, they would not need to register as a sex offender if convicted under Wiener's bill. It stalled in the Assembly Appropriations Committee after the chair, Assemblywoman Lorena Gonzalez (D-San Diego), expressed some concerns with the impacts of the bill on the youngest youth it covers and held it in her committee.

As the B.A.R. has previously reported, Gonzalez's decision led to a rare rebuke from EQCA and cost her receiving a perfect score on its 2019 Legislative Scorecard. EQCA leaders had told the B.A.R. they were upset by her holding the bill because they were confident of seeing it be passed by the Assembly and then become law, as it had already passed out of the state Senate.

Wiener told the B.A.R. he has been working with Gonzalez's office to address her concerns and expressed confidence that the bill would advance out of her committee this year. Their talks are centered on how 14 and 15 year olds, for instance, would be treated under the bill.

"I think that she had some very specific concerns that are easily addressable. And I think, I think she just ran out of time," Wiener said, chalking up the public dust-up about the bill after it was held last summer to a communications breakdown. "I think this is eminently fixable, and I am 100% confident that Lorena supports the bill and that she's going to work with us."

In light of fierce opposition from medical lobbying groups, Wiener last April tabled his SB 201 that would have banned medically unnecessary surgeries on intersex infants, allowing the individuals to make the decision themselves when they were older. Such individuals are born with both male and female genitalia and often undergo surgery shortly after birth to assign them to one gender.

Wiener told the B.A.R. that he is amending the bill so that the age of informed consent would be set at 6 years old. Doing so gives parents time, noted Wiener, to become educated about what intersex means and what the various options are for their child in terms of the medical interventions available to intersex individuals.

The Senate's business, professions and economic development committee has until January 24 to send it to the full Senate for a floor vote. That chamber must pass it by January 31, sending it to the Assembly for approval, likely sometime this summer.

"We're trying to work with this committee," said Wiener. "I'm hoping we'll be able to work it out."