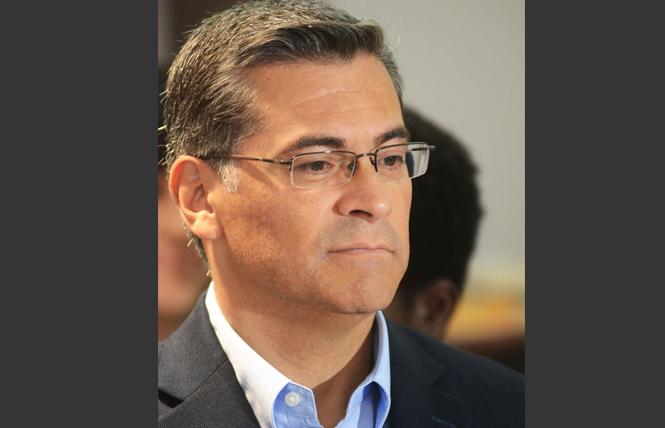 California Attorney General Xavier Becerra joined the attorneys general of 17 states and the District of Columbia in signing a December 19 comment letter protesting the proposed elimination of LGBT discrimination protections from U.S. Department of Health and Human Services guidelines.

"This is the latest move from the Trump administration's playbook of denying people their rights and access to care based on who they love, no matter who it hurts — including children in need of loving homes," Becerra said in a California Department of Justice news release December 20. "In California, we will keep moving forward on behalf of all of our communities and families in the fight to defend our nation's anti-discrimination protections."

The proposal, announced last month, would change that provision to prevent discrimination "to the extent doing so is prohibited by federal statute."

But how much discrimination on the basis of sexual orientation or gender identity is prohibited by federal statute is up for debate. The U.S. Supreme Court is set to decide next year whether Title VII of the 1964 Civil Rights Act protects LGBT people under its prohibition of discrimination based on sex.

If the HHS rule goes into effect, it would open LGBT people to broad discrimination by organizations and programs that receive funding from the department, should federal non-discrimination law be interpreted not to apply to LGBTs.

"The proposal would apply to a broad range of HHS grant programs, including maternal and child health grants, federally-assisted health training programs, Head Start programs, and mental health and substance abuse grants," Becerra's release states. "LGBTQ families who foster and adopt children are among the most likely to be harmed by potentially being excluded from participation in federally funded child-welfare programs."

Others who joined in the comment letter included Maura Healey, a lesbian who is Massachusetts' attorney general, and Josh Shapiro, Pennsylvania's AG.

Both the attorneys general and HHS cited civil rights in defense of their positions.

"HHS is committed to fully enforcing the civil rights laws passed by Congress," a November 1 HHS statement justifying the decision reads. "The proposed rule represents the Trump administration's strong commitment to the rule of law — the Constitution, federal statutes, and Supreme Court decisions. These require that the federal government not infringe on religious freedom in its operation of HHS grant programs and address the impact of regulatory actions on small entities."

The November 1 statement also said that the regulation in question will not be enforced between that time and the promulgation of the new rule.

Becerra's office joined San Francisco and Santa Clara County in suing HHS earlier this year on account of its proposed "refusal rule," which would have allowed hospitals and health care workers to refuse service on account of their religious beliefs — a move aimed at limiting access to abortion and contraception but that would have allowed broad-based discrimination against LGBT people generally.

The rule was intended to go into effect on November 22; however, three federal judges — including one in San Francisco who decided the California suits — struck down the rule as unconstitutional.

When asked if Becerra would sue the Trump administration over the latest proposed rule change, a person in the attorney general's office said only "stay tuned."

When asked if Lambda Legal Defense and Education Fund, which joined the refusal rule lawsuit, would consider suing, attorney Currey Cook said in a phone interview with the B.A.R. that his organization would "look at that possibility, for sure."

"I definitely think it is problematic," Cook said. "They are basically saying 'it's already final' instead of doing what government agencies are supposed to do. They are turning their backs on sound policy in line with professional standards."

The San Francisco City Attorney's office did not respond to requests for comment as of press time.