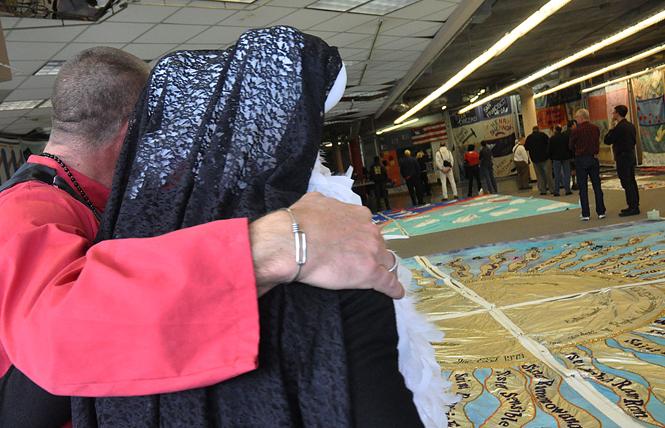 Sister Jezabelle, left, and Sister Honey, BE! look at the quilt panels dedicated to lost members of the Sisters of Perpetual Indulgence at the display of the AIDS Memorial Quilt in the Castro district that took place in 2012. Photo: Rick Gerharter

The Names Project Foundation's announcement this week that it intends to transfer stewardship of the AIDS Memorial Quilt to the National AIDS Memorial Grove was welcome news indeed. The Names Project is expected to officially close its doors by the end of next year, after the quilt panels are moved to San Leandro and its vast archive is relocated to the American FolkLife Center at the Library of Congress in Washington, D.C.

The AIDS grove is the appropriate organization to act as the quilt's caretaker — the two share similar missions to memorialize the lives lost to AIDS. A few years ago the grove played an analogous role for the HIV Storytelling Project, which allows people to share their stories about the disease. More importantly, after many years, the quilt will return to its rightful home in the Bay Area, where it was started by Cleve Jones, Mike Smith, Gert McMullin, and others. Both Jones and Smith praised the news, and Jones in particular expressed relief. Jones and the Names Project had a falling out about a decade ago when the quilt was moved to Atlanta and the board fired him as its spokesman after 15 years; he filed a lawsuit and they later settled out of court.

The 50,000 quilt panels will be housed in a warehouse near Oakland International Airport. John Cunningham, executive director of the grove, told us that the agency is committed to maintaining the Names Project's educational programs, such as lending out panels to schools, and a newer initiative, Call My Name, which works in African American communities to remove stigma about HIV/AIDS and add their own panels. Cunningham told us that he'd like to expand that program to possibly the API, transgender, and hemophiliac communities. By including all affected communities, the quilt's mission will continue to be relevant and impact lives. The quilt is a wonderful educational opportunity; and as time passes with more and more people unaware of the terrible AIDS years, it combines history and remembrance in a powerful way.

As equally important, the quilt's huge archive of correspondence, photos, tributes, and other ephemera will be housed in the American Folklife Center at the Library of Congress, making the collection more accessible to researchers and the public. "The Library of Congress is proud to serve as the home of the National AIDS Memorial Quilt archive to preserve its legacy and give the memorial a home both on the East Coast and West Coast," Librarian of Congress Carla Hayden said in a news release. She added it will help to humanize and demonstrate the scale of the AIDS pandemic in a powerful way while honoring lives lost.

House Speaker Nancy Pelosi (D-San Francisco) deserves kudos for helping to make the transfers possible. For several years, the Names Project had been searching for a new home for the quilt until Pelosi brought the parties together. Congressman John Lewis (D-Georgia) and Congresswoman Barbara Lee (D-Oakland) are also to be commended for their work on the project.

Julie Rhoad, the president and CEO of the Names Project, deserves recognition for 1) realizing that a new home was needed for the quilt and archive and 2) understanding that a nonprofit can, in her words, "close and cease operations" when it is no longer needed. That's a realization that a lot of nonprofit organizations struggle to foresee or accept: the ability to recognize when change is necessary by either consolidating with another agency or closing. It's a difficult responsibility, and Rhoad, from what we understand, took a thoughtful approach and was willing to work with the AIDS grove and political leaders for an outcome that benefits the quilt, its archive, and the public.

Finally, Cunningham and the AIDS grove board are to be applauded for stepping up and embracing this project. Shipment of the quilt panels to Oakland will begin next month, and the last are expected to arrive by the end of January when a comprehensive review will be conducted to ensure proper handling and care.

The AIDS quilt, which started as a creative and poignant memorial, now includes thousands of panels, 105,000 names, and sadly continues to grow. It's a unique and powerful symbol that requires funding for conservation and promotion. The AIDS grove has done an important service to preserve our history for which we should all be thankful.