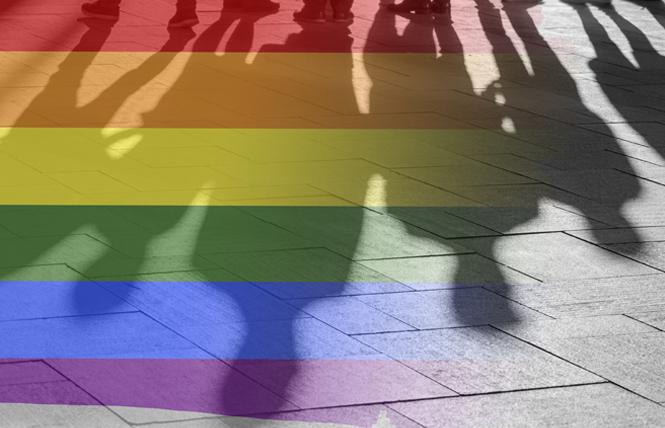 A new report details the history of conversion therapy in countries around the world and proposes recommendations for halting the widely debunked practice. Photo: Savvapanf Photo/AdobeStock

A first-of-its-kind report documenting conversion therapy around the world highlights the pervasiveness of the practice.

The report found that religion and "pseudo-health care" facilities promote preying on deep-rooted cultural faith and honor among families, who often instigate LGBT family members getting conversion therapy treatment. In some cases, LGBT individuals self-admit themselves to conversion therapy centers or practices, the report noted.

Nearly 500 people from 80 countries responded to an online survey distributed in English and Mandarin, during a three-week period in March. Researchers followed up with interviews in March and April with 19 individuals who indicated interest in telling their stories.

"Our report paints a chilling picture of the global prevalence of these barbaric practices, which constitute cisgender, heteronormative indoctrination," Outright deputy director Maria Sjödin said in the organization's news release. "So-called conversion therapy efforts hinge on the belief that cisgender heterosexuality is the norm, and gender identities beyond the binary and/or same-sex attraction not only fall outside the norm, but have to be changed, if need be by brutal, inhuman force, through practices which have been recognized to be tantamount to torture by the United Nations High Commissioner for Human Rights."

However, even some countries that have banned the practice of "curing" sexuality and gender identity continue to struggle against conversion therapy. After the report was published, Ecuadorian LGBT organization Silueta X alleged that an 18-year-old identified as Ruben B was taken against his will and institutionalized at a so-called conversion therapy center known as Reserved on August 19, according to the organization's August 26 news release.

Ruben's friends reached out to the organization, but his family denied he had been taken against his will and told members of Silueta X that Ruben was at a retreat known as Juan XXIII in Quito, the country's capital city, when they investigated the complaint.

Silueta X's leaders asked authorities to investigate the situation and reminded the public that the practice, while still a challenge to shut down, is illegal.

In the U.S., several states have banned the practice, mostly just for minors, such as California. Ten countries have a partial ban in place, including Canada, while 10 other countries, such as Mexico, have movements pressuring governments to ban the practice, according to the report. That means 172 countries around the world don't ban or have a movement against conversion therapy, despite it being denounced by the World Health Organization and other organizations.

One story
In Africa, only South Africa partially bans the practice of conversion therapy out of the continent's 54 countries.

Nigerian university professor Mocha, 43, a transgender woman, told the Bay Area Reporter during a WhatsApp call on Monday that she was lucky, despite two attempts by her family to "cure" the LGBT activist of her gender identity.

Mocha didn't want to use her last name to protect her family and her own safety.

"I've been very lucky. Other people have been beaten up by mobs [and] had their front teeth kicked in," she said. "They [the mobs] felt that if they [LGBT people] were tortured they would stop being who they are."

The first time her family tried to cure her she was only 9 years old. Her family, embarrassed by her effeminate ways, took her to a Tiv tribal doctor to "cure" her of what they believed were evil spirits, she said. The doctor performed a ritual cutting on several parts of her body, inserting an herbal concoction into the incisions before killing a black rooster and throwing it into the Benue River supposedly to take the evil spirits from her. It didn't work.

She was 24 when her family made a second attempt to "cure" her. They took her to a Catholic priest whom she confessed her desires and her experiences. The priest performed a ritual and told her to pray and fast as her penance. She did this for a year. It didn't work.

A middle child with two older brothers and two younger brothers, she left her family when she was 26. She moved across her small town to a new neighborhood.

"I was a lot happier living on my own being who I wanted to be," she said, talking about connecting with other transgender Nigerians. "I wasn't worried about who was watching or who was judging."

She was relieved of her family's pain and pressures, but societal pressures and her experiences continue to trouble her. She hasn't been able to maintain relationships with other men because homosexuality is illegal in Nigeria and the pressures of potentially being caught weigh on the relationships.

Individuals caught engaging in a same-sex relationship can serve up to 14 years in prison.

Still, Mocha believes her experience was not as bad as the brutal attempts by families fueled by religious beliefs that homosexuality and gender identity are sins to convert their children to a heterosexual way of life. It happened to her first love, who, when reunited after their school years, wouldn't look her in the eyes, she said.

"I was so hurt because it was magical back in boarding school. It was a fairytale and the experiences I had with him in boarding school would last a lifetime," said Mocha, who blamed brutal methodologies of conversion therapy on the break-up.

"Here was this totally different person whom I couldn't have a connection with anymore," she said. "He wasn't able to look into my eyes anymore. When I looked at him, he looked away. It really, really broke my heart."

Mocha said she's speaking out because she doesn't want younger LGBT Nigerians to experience what she and others have gone through.

Yet, she doesn't want to leave Nigeria like many other LGBT people have.

"Home is where the heart is. I won't be happier anywhere else in the world," she said, listing off the things she loves: the culture, food, and the people.

She remains hopeful, as she sees laws and attitudes changing in other African countries, that someday Nigeria will come to accept its LGBT community.

"I think that it will change. It's a matter of time. Nigerian society is very religious and are not very open," she said.

OutRight researchers also concluded that conversion therapy does not work. The researchers outlined ways that countries can "safeguard their LGBTIQ citizens from these harmful practices."

Also Davila, 41, a veteran HIV/AIDS and LGBT rights advocate, was elected two months ago, but he won't take office until January 14.

Until then, due to the threats, he has stopped walking the streets of Guatemala City, the country's capital city, where he lives with his partner, who wasn't named in media reports. He only drives to his office and home.

He told Reuters that the growing fundamental Christian and evangelical movements in the Catholic-majority country has stifled the LGBT right movement's progress, changing people's minds about queer people in the Central American country.

Davila ran representing the progressive Winaq Movement party on a platform promising to fight for rights for communities historically excluded from society.

LGBT Guatemalans enjoy some rights, such as employment and housing discrimination protections, serving in the military, and gender reassignment surgery.

Once in office, Davila, who is HIV-positive, plans to work for better health care for people living with HIV, push for hate crimes legislation, and draft a law that will allow transgender Guatemalans to legally change their sex on their legal documents. Currently, transgender people can only change their names, reported Reuters.

NewNowNext reported that HIV is a problem in Guatemala. HIV prevalence among gay men is 8%. Among trans people, the rate is 22.2%, with only an estimated third of the transgender population accessing antiviral therapy, according to UNAIDS.

One of the first tasks Davila will tackle when he does take his seat will be against the Life and Family Protection bill, which will ban same-sex marriage. The unusually restrictive marriage equality ban narrowly defines a man and a woman as being born as that sex at birth.

"This law is regressive," said Davila. "It violates the human rights of people of diversity."

The bill is currently in its third and final vote in the country's Congress before being passed into law.

The decision was made August 2, but the LGBTI Equal Rights Association for Western Balkans and Turkey only announced it in an August 28 news release.

The court overturned a previous ruling by the Civil Status Office in the town of Prizren, which denied the unidentified Kosovo transgender plaintiff's request to change their name and gender marker on their legal documents at the Central Civil Status Register and Civil Status Principal Register, according to the release.

In the release, the organizations applauded the court's decision, calling "it a very important step to further ensure the rights of the trans community in Kosovo."

Transgender Kosovoars face discrimination and violence. More often than not members of the small community don't declare their gender identity for security reasons and organizations are challenged to gather and report attacks and discrimination against the transgender community, according to the release.

Organization leaders said they see the decision as setting an example for how the registers will handle future gender identification change requests.