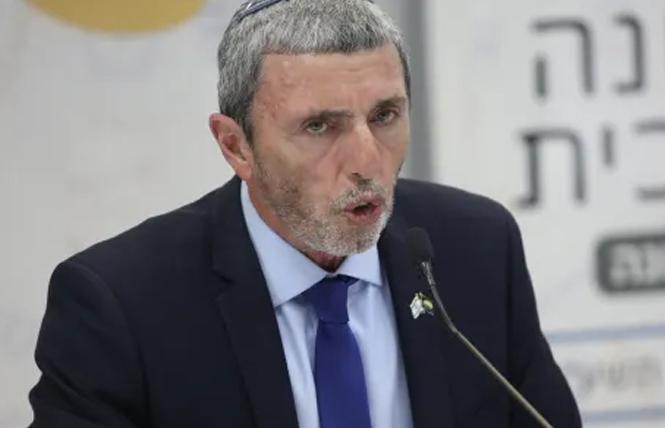 Thousands of LGBT Israelis and their supporters took to the streets of Tel Aviv last Sunday, calling for the resignation of interim Education Minister Rafi Peretz following statements he made supporting conversion therapy.

The orthodox rabbi told Dana Weiss on Channel 12 News July 13, "I think it's possible," when asked if LGBT peoples' sexual orientation can be converted to being straight.

"I can tell you I have a very deep knowledge of education and I did it," said Peretz, who is head of the far-right, ultranationalist Jewish Home Party.

Weiss asked him how he advised youth questioning their sexuality.

"I would first of all embrace him, then I said let us think, let us learn, let us consider," said Peretz, who is only one month into his job. "The goal is that, first of all, he gets to know himself better and then he can decide."

Xavier Bettel, the gay prime minister of Luxembourg, skipped the farewell dinner for Israeli Ambassador to Belgium and Luxembourg Simona Frankel in protest over Peretz's remarks.

Nitzan Horowitz, the gay head of the left-wing Meretz Party, called Peretz a "minister of darkness."

Conversion therapy has been debunked by health organizations and experts around the world, including Israel's Health Ministry. According to the Jerusalem Post, in 2014 the ministry stated, "There was no scientific evidence that gay conversion therapy, which includes counseling and even electro-shock therapy, is effective" and that it "caused harm to those exposed to it."

On Sunday evening, Israeli LGBT organizations, politicians, and community leaders gathered at Tel Aviv's Kiryat HaMemshala government building and near Peretz's home, calling for his resignation or for Prime Minister Benjamin Netanyahu to fire him.

"That Peretz made this assertion as the head of the education ministry — responsible for equipping the next generation of Israelis with the knowledge and tools to build a stronger, more inclusive future for their country — is all the more dangerous," the statement said.

"At least one orthodox group has already condemned Peretz's comments about conversion therapy, and I look toward others to follow suit," she wrote. "For the moment, we must demand that Israel's LGBTQI children are safe to be who they are and ensure that Israel's political leadership represents all its citizens.

"The change I hope to see is for Jewish orthodox groups that still support outdated and dangerous conversion therapies to come to a better understanding of LGBTQI identities that is organic to their religious worldviews," she added, citing the same argument she makes in the anthology she co-edited "Struggling in Good Faith." "Only then will this destructive practice be obliterated."

State Senator Scott Wiener (D-San Francisco), a gay Jewish man, told the Bay Area Reporter, "I was horrified," when he received the news, but he wasn't surprised.

"I'm a strong supporter of the state of Israel but the Netanyahu administration is just terrible on LGBT issues," said Wiener. "They talk a good game, but they are in coalition with extreme right-wing ultra-orthodox parties who hate our community."

Wiener likened Netanyahu to President Donald Trump and his administration, recalling Trump's announcement of a global campaign to end violence against LGBT people several months ago.

Israeli LGBT leaders, in a joint letter to Netanyahu, expressed their discontent.

"Your explicit promise not to give the education ministry to a benighted politician blew up in our faces when an education minister you have recently appointed expressed public support in gay youth 'conversion therapy,'" the letter read, according to Haaretz.

Peretz immediately attempted to apologize and explain his way out of the firestorm he created through social media, where he lashed out with a litany of excuses and accusations before reiterating his original statement in an official news release.

"When I was asked specifically about conversion therapy, I said that from my experience alone, when students turned to me from religious Zionist community and asked me for direction, I directed them to professionals at their request and I saw that it was possible," he wrote, adding that he loves and respects "every person as they are."

Netanyahu's power is in a fragile political state as he gears up for a September 17 election. He quickly distanced himself from Peretz and last Sunday announced his new international spokesman Evan Cohen, Ph.D., who is gay.

For more than a decade, critics have accused Netanyahu of "pinkwashing" Israel for promoting the country as LGBT-friendly and as an attractive destination with its popular Tel Aviv Pride that has grown to more than 200,000 attendees. However, the rainbow party is far from what is happening behind the scenes for LGBT rights in Israel, advocates maintain. Queer activists claim that his administration not only violates Palestinian rights but also LGBT rights.

Cohen, a longtime LGBT activist, is the founder and head of Likud Pride, a caucus of LGBTQ activists within the ruling party. He insisted that Netanyahu's announcement had nothing to do with Peretz.

"The timing is irrelevant, and the appointment would have been criticized no matter when it was announced," Cohen told the Jerusalem Post, noting that he was recruited six weeks ago but had to undergo administrative processes for him to officially step into the role. "I won't play identity politics. I won't play that game. [My orientation] has nothing to do with the position I've been given."

However, a Likud official close to Netanyahu admitted that the Peretz scandal instigated Sunday's announcement.

Eitan Ginzburg, one of the party's three gay members of the Knesset, noted the lack of professional pedigree in Netanyahu's announcement of Cohen and placing the focus solidly upon his long record of LGBT activism.

"It was cynical for him to announce the appointment at this specific time and mention his orientation, not his international relations capabilities," Ginzburg told the Jerusalem Post. "I don't know anything about Evan's abilities in talking to the press, but this appointment is intended to portray the prime minister as pro-LGBT when he has clearly proven that he is not."

Amir Ohana, the first gay minister appointed in the Israeli government, praised Cohen, calling him "one of the most brilliant people I have met in politics."

The independent expert on protection against violence and discrimination based on sexual orientation and gender identity was established in 2016.

Madrigal-Borloz and Muntarbhorn established a precedent of helping developing nations create policies and actions to protect LGBT people from discrimination and violence based on their research and work with local organizations and governments.

Global advocates lobbied to renew the mandate for a year. Earlier this month a big campaign brought together more than 1,316 organizations from 174 countries and territories calling for the renewal of the mandate in a joint letter to the council.

India maintained its long-held position abstaining from the vote despite the South Asian country's Supreme Court striking down Section 377, its anti-sodomy law, last year and a massive campaign joined by Indian politicians and LGBT activists urging diplomats to vote in favor of the resolution.

"As LGBTQ people around the world face unprecedented challenges and the rolling back of previously secured protections — including by the Trump-Pence administration in the United States — it is heartening that the United Nations has taken this bold step once again to protect our communities from violence and discrimination," said Human Rights Campaign Director of Global Partnerships Jean Freedberg in a July 12 statement from the organization.

"In far too many places around the world, violence and murder of people because of their real or perceived sexual orientation or gender identity remains a daily reality," Stern told the Washington Blade. "Even in countries which have enjoyed significant progress in recognition of the human rights of LGBTIQ people, a backlash has been growing."

The House of Commons voted 383-73 to extend marriage equality.

The votes follow long campaigns for both social issues and bring the country in line with the rest of the U.K.

However, the bills continue to face a challenge as the Stormont Assembly, the regional government in Northern Ireland, has been in an ongoing political deadlock since 2017. If Stormont isn't restored by October 21, Westminster will have the power to approve or repeal the measures.

Same-sex weddings could potentially begin within three months, said Labour MP Conor McGinn, a longstanding ally and supporter for marriage equality in Northern Ireland, who put the legislation to a vote.

The outcome was sad for Sara Canning, the partner of slain journalist Lyra McKee. The couple were planning to wed.

Speaking to Susan Keogh of Newstalk Breakfast, Canning said, "For me personally, it was such a bittersweet moment, it was something that so many of us in Northern Ireland have wanted for a long time and so many really fought and put blood, sweat and tears into getting Westminster to legislate on our behalf.

"So, it was fantastic to see it finally go through," she added, noting that McKee "would have been incredibly pleased."