More queer people than ever living on the street in SF 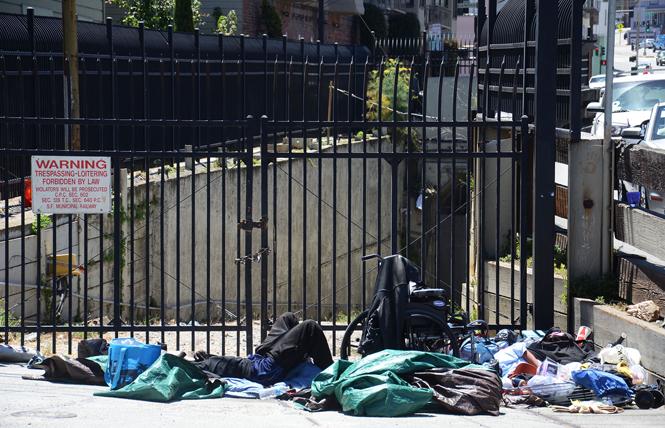 According to the Point-in-Time Count released over the holiday weekend by the Department of Homelessness and Supportive Housing, more queer people than ever — 1,054 — are living without safe, permanent housing on the streets of San Francisco.

The general street count was conducted on January 24. Two years ago, the number of queer people found living on the streets during the count was 1,014.

These figures are of course part of a larger one: more people of all kinds are living on these streets than ever before, with the number coming in at 8,011, a 19% increase over the same count in 2017.

Twenty-seven percent of these people are LGBTQ, roughly the same percentage as were counted in the previous report two years ago. Yet even though percentages stayed the same, the hard number is larger this year.

For homeless youth, the executive summary states that there were 1,145 in the 2019 count, down slightly from the 1,274 reported in 2017. This year, 46% of youth age 24 and under identified as LGBTQ+. Queer respondents to this survey were more likely to report first experiencing homelessness as a teen or young adult than their straight counterparts (58% vs. 40%).

More transgender people were reported in this year's survey, as well. In 2017, 9% of the LGBTQ homeless respondents were transgender people, and in 2019 the proportion had jumped to 13%. The 2017 survey did not specifically offer a nonbinary option, but included those respondents in a larger category marked "other." This year, 3% of the LGBTQ homeless identified themselves as genderqueer or nonbinary.

An estimated 12% of San Francisco's general population identifies as LGBTQ+; meaning that the 27% of the homeless who are queer represent a disproportionate ratio. The breakdown among the homeless is 55% gay or lesbian, and 29% bisexual.

Jeremy, a 22-year-old gay man who declined to give his last name, spoke to the Bay Area Reporter about his experiences in United Nations Plaza, near where he usually sleeps. "Yeah, there's a lot of us who's gay," he said Tuesday morning, noting that there is a tendency for LGBTQ homeless people to stick together. "And a lot of us who's positive. People think that's all over, and there's medicine and now, and that's true. For some people."

The overwhelming majority (70%) of homeless people in San Francisco lived in the city before losing their housing. Twenty-two percent came from elsewhere in California, while only 8% moved to the state after becoming homeless.

One of the most important metrics collected by HSH is whether individuals are experiencing their first bout of homelessness, or whether this has happened to them before. This statistic helps measure whether programs and available assistance are adequate to addressing the need for permanent, stable housing for people to get off the street. This year's number of people for whom this was a first time occurrence increased, from 25% in 2017 to 31% in 2019. In addition, the percentage of respondents who indicated that they had been without housing for a year or more increased in 2019 from a previous 59% to a current 65%. This number shows a consistent rise in these reports dating back to 2005.

The Point-in-Time report also breaks down the data by supervisorial districts, showing the largest concentrations of homeless people in District 6 (3,659) as well as (1,863) in District 10, despite few shelter services in that part of San Francisco. In District 8, which includes the Castro, the report counted 370 people, a decrease from 2017's 405 people counted.

Gay District 8 Supervisor Rafael Mandelman weighed in on the possible solutions for the ever-rising homeless count.

"Nobody in San Francisco is happy with the increase," he said. "The number of unsheltered people in District 8 has gone up, but that's part of a regional and statewide trend. I'm hoping that the additional resources in the recent budget should make a difference. Every district needs to do its fair share, but I'm not sure that putting all of our resources in Navigation Centers is the exit for homelessness. We need permanent supportive housing. Navigation Centers are part of the solution but not the whole solution."

District 6 Supervisor Matt Haney spoke with the B.A.R. via text message Monday night, noting that the population is clustered where there are services and urging an emergency view of this situation.

"I want to see our response to homelessness reflective of the citywide crisis that it is. That's not happening now. For example we still see nearly all of our shelters, supportive housing, and services concentrated in one small part of our city. We need shared responsibility across San Francisco if we are going to address this challenge," he wrote.

Haney added that he has proposed an ordinance to require Navigation Centers to be built in every district. (LINK https://www.sfchronicle.com/politics/article/Forget-the-excuses-new-proposal-requires-13760947.php)

Gwendolyn Westbrook, CEO of United Council of Human Services in Bayview Hunter's Point, in District 10, told the B.A.R. by phone that the area is perennially underserved despite the number of homeless people counted in the report.

"We are an underserved group of people doing the best we can to help. The only help we're getting is because of the mayor," she said, referring to London Breed. "She's the only one who has realized the way this problem affects this part of the city."

Westbrook's organization is one of the few offering services for unhoused people in District 10, with 250 beds that she says are always full.

Breed's office responded to a request for comment by referring the B.A.R. to a news release from May issued in anticipation of these reports.

"Specific to the LGBT community, the mayor has committed $2 million in this year's two-year budget to provide housing subsidies for transgender residents, who are 18 times more likely than the general population to be homeless," the statement read. "She's also continuing to focus on our transitional age youth population, a large percentage of which are LGBT. The mayor's Rising Up Initiative provides housing subsidies and employment opportunities for TAY, with a goal of cutting youth homelessness in half by 2022."

To read the report, go to http://hsh.sfgov.org/research-reports/san-francisco-homeless-point-in-time-count-reports/.

Updated, 7/11/19: This article has been updated to include comments from Supervisor Rafael Mandelman.