Paris marks Pride Month with honors for US gays 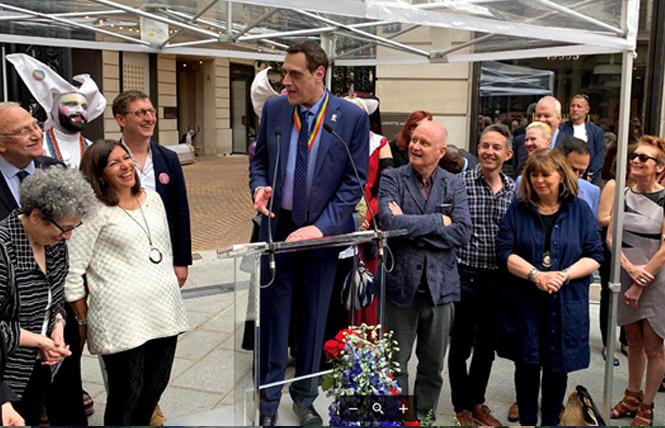 Milk's square "will be a permanent inspiration for LGBT rights activists and everyday heroes alike who are visible in their lives," Miriam Richter, director of the Harvey Milk Foundation, said in a statement to the Bay Area Reporter.

The foundation continues to work toward social justice in the face of "rising ultra-nationalistic movements," she continued, adding that Stuart Milk has worked in France on LGBT initiatives and events for six years and collaborated with Hidalgo for the past three years.

"Harvey's story and courage are our prime ingredient in providing hope and inspiration to all who cherish freedom and equality," she said.

Stuart Milk was unavailable for comment due to accepting an award in Oslo, Norway. In an email to the B.A.R., Kolakowski, who was in Paris as part of a U.S. State Department-sponsored trip, wrote that it was a moving tribute.

The B.A.R. also made multiple attempts for comment by Weil but was unable to receive a response by press time.

Paris is a sister city of San Francisco. Harvey Milk was the first openly gay man elected to office in the city and California when he won a seat in 1977 on the San Francisco Board of Supervisors. Tragically, disgruntled ex-supervisor Dan White assassinated him and then-mayor George Moscone in 1978.

In addition to the public square named after Milk, Paris leaders dedicated a square honoring the 1969 Stonewall riots in New York, which is called Stonewall Place. A plaque was dedicated to rainbow flag co-creator Gilbert Baker. Streets were named after the late French transgender communist activist and poet Ovida Delect and gay Holocaust survivor Pierre Seel.

"You always have to remember where you come from," Romero told Têtu, France's LGBT magazine. "For my part, I know what it is to have started my life in a country where homosexuality was criminalized, and the majority of the opinion was homophobic."

The ceremony was held several days before the Pride Fortnight Fest, leading up to Paris Pride, June 29, and ahead of Stonewall 50 World Pride this weekend in New York City.

"Paris' elected officials view Paris as having a major role in being a leader in promoting diversity and LGBT recognition," wrote Kolakowski. "Mayor Hidalgo spoke about Paris being a sanctuary and a center for LGBT people.

"This hasn't always been the case," she added.

Since 2014, more than 40 places have been renamed in districts throughout the City of Lights to honor LGBT historical figures, starting with gay French men Bruno Lenoir and Jean Diot, the last two men known to have been sentenced to death due to homosexuality, reported Paris.fr.

"Commemorative street naming has recognized numerous heroes for a long time but choosing LGBTQI figures was a recent reflex that both Paris and San Francisco had at the very same moment," noted Emmanuel Lebrun-Damiens, the gay consul-general of the French Consulate of the Northwest in San Francisco, in a statement to the B.A.R. "It is another evidence that the two sister cities share the same values and walk hand in hand ahead of their time. The greatest LGBTQI advocates are now recognized as true heroes alongside other historical and recognized figures. It's a great achievement!"

In light of Paris honoring Milk and Baker, some have suggested San Francisco return the favor by naming a street or creating a plaque to commemorate gay French philosopher Michel Foucault.

Foucault was well-known in San Francisco, having spent time in the city where, among other things, he frequented South of Market's leather bars.

Lebrun-Damiens thought the idea of a plaque honoring Foucault would strengthen the Paris-San Francisco connection.

"Michel Foucault traveled frequently to San Francisco, a city that marked his personality and where many intellectuals built on his philosophy," Lebrun-Damiens said in a statement to the B.A.R. "A plaque would make people aware of this other great connection between Paris and San Francisco." 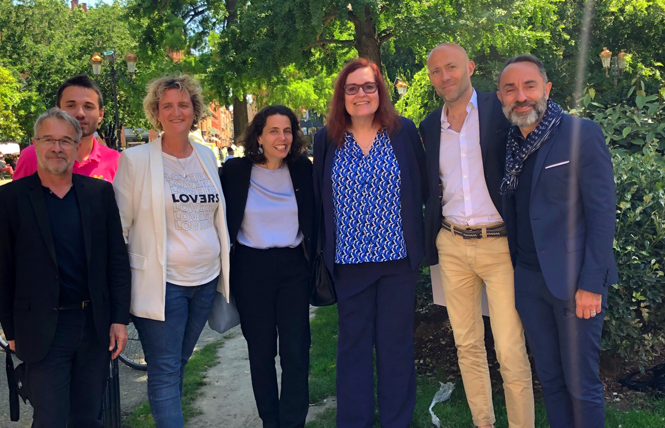 Trans judge's French visit
Kolakowski's stop in Paris was one of three cities she toured this month on the State Department-sponsored trip to speak to groups about LGBT rights.

The June 16-19 visit, to commemorate the 50th anniversary of Stonewall, started in Bordeaux, where Kolakowski attended the city's Pride event and spoke about her experiences as a transgender woman personally and professionally, and about United States' LGBT history as a guest of the U.S. Embassy in France.

She met with a judicial group in Bordeaux as part of a cultural exchange visit.

In Toulouse, she visited at Espace des Diversites, a diversity center, where she met with Nicole Miquel Belaud, the mayor's deputy in charge of diversity. She also spoke at a regional governmental center, the Conseil Départemental de la Haute-Garonne, and gave a newspaper interview.

In addition to the aforementioned plaza ceremony in Paris. Kolakowski also met with staff and youth at Le Refuge Paris, an organization that arranges independent housing for young people who've been thrown out of their homes, some of whom are refugees.

In an email interview with the B.A.R., Kolakowski, 57, wrote that she talked about how, in many nations, including the U.S., acceptance of LGBT people and rights varies throughout the country and that there were many similarities between LGBT French people and American queer people.

"Many local governments supported the work of eliminating discrimination of many types, and there are pockets of resistance," Kolakowski wrote.

"My biggest takeaway is that LGBTQ+ people in France are a lot like they are in the U.S., and in other places that I have visited - Canada, Ireland, and the U.K," she added.

John, 72, received the Legion of Honor June 21 for his work at the Elton John AIDS Foundation during a private ceremony with Macron at the presidential Élysée Palace a day after his Paris concert.

John's husband, David Furnish, and their two children joined him at the ceremony.

The day marked France's Fete de la Musique, when amateur musicians are invited to the palace courtyard and the streets of Paris to play music to celebrate midsummer.

According to the Washington Post, Macron used the event to mobilize youth and world leaders to fund the Global Fund to Fight AIDS, Tuberculosis, and Malaria.

He told the crowd that 27 million people have been treated and saved due to the fund. In 2016, the fund raised nearly $15 billion.

His foundation, which has raised nearly $400 million for HIV prevention, education, and support, celebrated its 25th anniversary in 2018, reported Gay Star News.

John has been circling the globe on his "Farewell Yellow Brick Road" tour after more than 50 years creating music and performing.