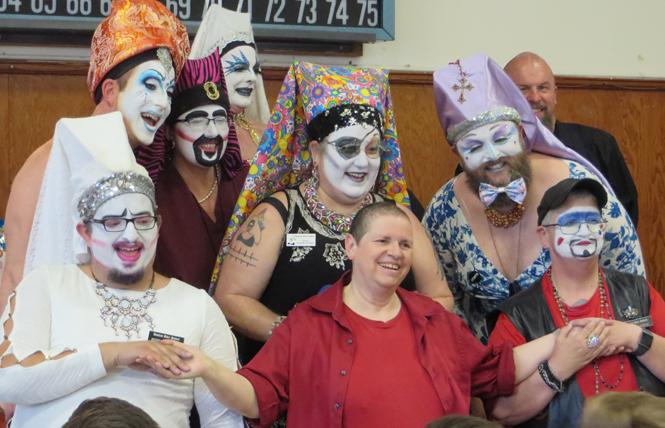 The Russian River Sisters of Perpetual Indulgence have been a steady force in Guerneville, sparking joy, as is their mission, while gaining acceptance for both themselves and the greater LGBT community in a rural area that's about an hour and a half north of San Francisco.

It wasn't always easy, but in nearly 20 years, the official Russian River Sisters group continues to reach out and help out in Sonoma County, all while maintaining their sense of humor.

A nonprofit, the Sisters are "educators, friends, and advocates for those in need, and comforters for those in distress," as their website states. Some are gay men, some are "big old lesbians" and at least one identifies as a bisexual woman pirate. All vow to "promulgate universal joy and expiate stigmatic guilt," as is the creed of the organization that started in San Francisco 40 years ago and now has chapters, or orders, around the world.

The North Bay order of 26 Sisters started in 2001, according to founding member Sister Sparkle Plenty, also known as Jim Longacre, the Saints Chairnun.

Plenty revealed how this order of "secular nuns" has been so successful (and had so much fun) in raising Sonoma County's community spirit. Her tales often overlapped with those of three other Russian River Sisters who spoke in person with the Bay Area Reporter. (All wanted to use she/her pronouns since they were talking in their Sister personas.)

Over the years, the Sisters have helped seniors, schools, and raise HIV/AIDS awareness with smiles, wigs, and fabulous habits.

"Someone came to us and said the Guerneville school needed fundraising help, so we organized an event at a local bar and asked for help," Plenty, 67, said. After that successful effort, they heard the Russian River Senior Center in Guerneville was losing a large grant from United Way.

"Their executive director worried the center would have to close," Plenty said. The Sisters worked with the center and the United Way, and ultimately their combined efforts replaced all the lost funding.

Tim Miller, executive director of West County Community Services, which runs the senior center, wrote in an email that the center has received funds multiple times from the Sisters over the years.

"One of the most effective, and inarguably the most colorful, community fundraising forces in the lower Russian River is our local Sisters of Perpetual Indulgence," he wrote. "Schools, health care, housing, environmental, and social justice organizations have all benefited from their energy and fundraising prowess."

Others in the group include Sister Domestica Fairs, 44, a gay man also known as Joseph Bullock. She's the board president and mistress of ceremonies. Fairs professed as a Sister in 1999 while living in Iowa, and joined the Russian River order in 2002.

Sister Sara Femme Fatale, 52, also known as Angelique Rivera, is the self-described "big old lesbian." She's the board vice president as well as the grants chair and the mistress of novices, archives, and habits. She joined in 2010, and was a Sister in San Francisco before moving to the Russian River.

Sister Sorenda 'da Booty, 44, the Pirate Nun and a bisexual woman, also joined in 2010. Also known as Melissa Black, she is bingo chairnun and web mistress.

"There were six of us," Plenty recalled. "We started a 'condom ministry' and provided free condoms to local bars. At first we thought, 'That's going to be our primary focus.' But after [George W.] Bush was elected and cut social programs, we realized our community was suffering."

Plenty remembered some skepticism when the Sisters first showed up.

"They thought the Sisters were just out for a good time, and we'd soon get bored and stop 'goofing off,'" she said.

But when Sisters started working with local schools and seniors, those doubts began to fade.

Attitudes start to change
"People started looking at us as a group interested in improving everyone's lives," Plenty said. As their website states, the order aspires to "make the best interest of the entire community the decisive factor in addressing issues and challenges."

The San Francisco Sisters had already organized bingo with a "gay twist," and the Russian River Sisters decided to borrow that idea. In August 2003, Sister Nova organized bingo during Lazy Bear Weekend. It was successful. They held another in September and that went well too. And so began a monthly tradition that continues today.

In an email, Nova, who's 65 and also known as Mike Bernard, confirmed that history.

Miller, of West County Community Services, said that Nova serves on the agency's board.

The Sisters' bingo games were unusual from the start: Plenty described them as a cross between "'The Rocky Horror Picture Show' and a church hall bingo."

Each game attracted more people, but the Sisters noticed something they did not like.

That started to shift as the crowds grew. Plenty observed, "Eventually, they sat next to each other, and started talking, and started sharing baby pictures and recipes. You could see the social barriers dropping."

Then, something unexpected happened.

The mother of a fire department official started baking cookies for the bingo games. Because of her, "We found out the fire department needed heat-sensing equipment to find people in burning, smoky buildings," Plenty said. "We decided we were going to raise money for that."

Each bingo usually has one or two designated beneficiaries that are required to provide volunteers, but the Sisters found out that some firefighters were terrified of gay people.

So the head of the Russian River Fire Protection District in Guerneville assured his crew, "There's nothing to be afraid of. You'll have a good time," recalled Plenty.

Rob Cassady, captain of the fire department, didn't remember all the details from that time, but praised the Sisters.

"They raised funds to make the purchase of our thermal imaging camera possible," he said. "A thermal imaging camera is useful not only in fires to find people and hot spots, but also in car accidents when a body might have been ejected from a car into the bushes, and even to assist the sheriff to locate bodies."

Plenty characterized attitudes after that evening: for the Sisters, "I happen to be gay and you're straight;" for the firefighters, "You're actually pretty cool."

As Femme Fatale observed, "The firemen learned a lot about us."

"Our bingo was a lot of hard work," Plenty acknowledged, "but it was also a huge stroke of luck." 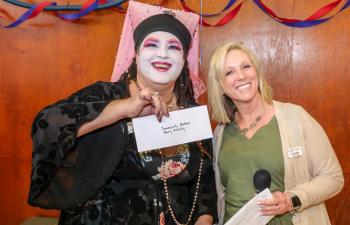 Welcome to Stumptown
Guerneville has a unique annual tradition called the Stumptown Daze Parade, named for the slang term for Guerneville in the early 1900s after so many redwoods were clear-cut. The parade is beloved by locals and hundreds cheer as it goes up Main Street. But 'da Booty recalled, "In our early days, we were not always invited."

As the Sisters' visibility and reputation increased, however, the welcome from the parade organizers changed radically.

The order itself has a unique tradition: its degree of gender diversity.

"We have the most female Sisters in the world," 'da Booty said. "And I think more women join our order because of the women already in the order."

"We have also had transgender members," she pointed out, and expressed pride in the visibility of transgender people "who come to our bingo and have fun."

There are four steps to become a Sister: Aspirant, Postulant, Novice Sister, and Fully Professed or Black Veil. Femme Fatale called these steps "a filtering period."

The Sisters also have members with other titles such as guards, fathers, and brothers. For example, "Guards manifest in male personae and watch over Sisters," Femme Fatale said, "But they are not purse holders!" Every Novice gains the right to wear whiteface and the white veil, "But not all members wear veils," she noted.

"To become a Sister, you have to have a project, which we call the Novice Project," Fairs explained. For Femme Fatale, it was a cabaret show oriented to women.

"We called it the 'Benefit for Boobs,' a fundraiser for breast cancer charities," she said.

For 'da Booty, it was making an elaborate scrapbook of the order, complete with a "family tree."

Plenty portrayed the completion of the four steps as "a learning and growth process."

Bingo and community grants
The Novice Project that has attained the most visibility is the monthly bingo held at the Guerneville Veterans Memorial Hall. The event's poster says it best: "Food! Fun! Free sh*t!" It's held on the second Saturday of every month, with a different theme each time; the venue holds about 230 players.

On June 8, the theme was "Let's Play Doctor! Bingo," which included an "I'm the Doctor" costume contest, and was a benefit for the Russian River Health and Wellness Center for low-income and underserved communities.

Jennifer Neeley, the center's associate director of development, said proceeds from this month's bingo benefitted its patient hardship fund, which supports immediate patient needs such as prescription and specialty copays.

"The Russian River Sisters of Perpetual Indulgence have been longtime supporters of West County Health Centers and, over the years since 2007, have contributed over $35,000 to WCHC programs," Neeley wrote in an email.

That includes $14,000 for its dental services; $7,000 to health care for the homeless; $3,000 to the Forestville Teen Clinic, which includes peer sex education programs; and $10,000 for uninsured patient care for medical and behavioral health services at the WCHC health centers in Guerneville, Sebastopol, and Occidental, Neeley wrote.

She added that the health center's board, patients, staff, and volunteers are "grateful and appreciative" of the Sisters.

The Sisters have planned their next bingo, set for July 13.

"Our ... theme will be 'Heroes and Villains' and will benefit Face to Face, a provider of HIV prevention and education services for Sonoma County," 'da Booty said. "And we'll have a pirate-themed bingo in August."

For the Cold Hands, Warm Heart Project, Sisters assemble packets of socks, hats, gloves, ponchos and flashlights for the homeless. It started as a project of a Sister who had been homeless.

Upcoming events include an ice cream social scheduled for July 6 at the Sonoma Nesting Company in Guerneville, and a Barbie Blowout to sell "collector Barbie dolls" in August. After people asked for child-friendly events, the Sisters recently started miniature golf parties at Pee Wee Golf.

Femme Fatale said they've raised about $1.5 million from bingo alone since they started. The money is disbursed "pretty much right away," she said.

But the Sisters also raise money at other events and community grants are distributed once a year at their Good Friday Anniversary Party. At the party, recipients walk on stage and describe how they would spend the money.

"The community loves the ability to see how the money is used, things like 'buy a microscope for a science class,'" Plenty said. "Now, we deal with over 100 local organizations, and every penny we raise stays here in the West County."

"This year we gave out almost $31,000 to a total of 28 awardees, including elementary school groups, senior centers, the homeless, animal rescue groups, and West County Health Services," Plenty said, with pride in her voice.

"We always approve Friends Outside, a program which works with inmates who have children," 'da Booty added.

6,000 and counting
"We have Sisters on every continent except Africa and Antarctica," 'da Booty said. "Over 6,000. We're absolutely characteristic nuns. We are not mocking nuns, we are nuns. But we have more fun."

Plenty illustrated how attitudes have changed since the early 2000s.

"Guys in trucks would drive by the Sisters on the street and yell 'Hey, faggot.' Now, they yell 'Hey, Sisters.' What really separates the Russian River Sisters from other orders is that Guerneville is a small community, not a large 'gay ghetto,'" Plenty said.