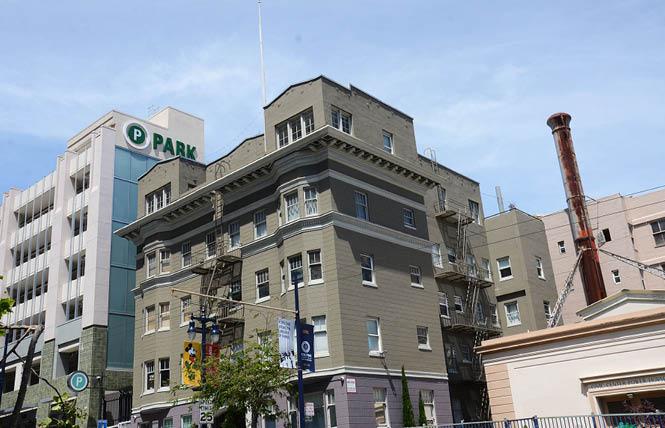 The flagpole at 324 Larkin Street will again sport a rainbow flag and the building will be renamed in honor of flag creator Gilbert Baker. Photo Rick Gerharter

As Pride Month activities and celebrations continue, the apartment building at 324 Larkin Street in San Francisco will be dedicated as the Gilbert Baker Rainbow Flag Apartments Tuesday, June 11.

According to a news release shared by the Q Foundation with the Bay Area Reporter, Mayor London Breed, gay District 8 Supervisor Rafael Mandelman, and District 6 Supervisor Matt Haney are expected to be on hand to dedicate the day to the memory of Baker, who, with his friends Lynn Segerblom and James McNamara, created the first rainbow flags for the 1978 San Francisco Pride parade. Those flags were different than the common six-striped flag seen today, which Baker turned in a worldwide symbol of LGBT Pride.

The building, which is now market-rate apartments, has gone through changes in ownership over the decades, transitioning from a location that San Francisco's Q Foundation worked with to provide critical housing to people with HIV, to private ownership that took down the property's iconic rainbow flag and chiseled the original Rainbow Flag Apts nameplate off the edifice, Q Foundation Executive Director Brian Basinger said.

Basinger said that his partner, Q Foundation co-founder James Nykolay, used to live in the building.

The recent restoration effort is being achieved through partnership with current property owners Veritas Investments, which has agreed to distinguish the building with new five inch gold lettering to spell out "Rainbow Flag Apts" again on the facade above the entrance. Veritas has also agreed to fly an extra-large rainbow flag for Pride Month, with 15 feet by 10 feet dimensions, to be replaced by a more modest 10 by 6 foot all-weather flag during the remainder of the year, according to Basinger.

Basinger spoke with the B.A.R by phone, offering a little local legend on the subject of the building.

"We're not sure that Gilbert ever lived in that building. But he did use it as a base of operations for a middle-of-the-night plan to run up the rainbow flag at the Civic Center sometime around 1978," Basinger said. "But getting the flag up the pole on the top of the building on Larkin would at least get it into all the pictures tourists are taking of the new Civic Center Plaza. But it's more than just the building. It's creating a gateway to the Tenderloin. It's really been an LGBT neighborhood longer than the Castro, longer than anywhere else."

In "Rainbow Warrior: My Life in Color," Baker's posthumously-published memoir, the Larkin location is obliquely rather than specifically referenced in regard to this anecdote. Baker's recollections of these early revolutionary days centers on that neighborhood, and the iconic prominence of the Civic Center Plaza. But the address of 324 Larkin goes without mention.

"We're thrilled and honored to be able to bring back the iconic role of the Rainbow Flag Apartments, and to celebrate the memory of Gilbert Baker," Au said in a Q Foundation release.

Veritas Investments has faced scrutiny this year from tenants and advocacy groups who claim that the company's practices amount to eviction through harassment or could even enable renters to strike based on current conditions.

The company has also come under fire for its empty storefronts in the Church Street corridor of the Castro. But Justine Shoemaker, assistant manager for Veritas, told members of the Castro Merchants at their June 6 meeting that the company has one property to lease now. She hopes all the new businesses there will be open by the fall.

Breed, Mandelman, and Haney did not respond to requests for comment.

According to Baker's biography that was distributed at the time of his death, the rainbow flag is in the public domain, as are all flags, and he did not profit from its usage as a commercial product.

"I am honored to help celebrate the Q Foundation and their unyielding efforts to create safe housing spaces for people suffering from HIV and AIDS," Beal said in the foundation's release. "I am grateful that Brian Basinger and the Q Foundation organized to name the Rainbow Flag Apartments in Gilbert's memory."

The San Francisco Public Library is scheduled to host a discussion panel and book launch event after the dedication ceremony at the Koret Auditorium at 5:30 p.m. to discuss Baker's posthumous memoir, "Rainbow Warrior: My Life in Color," which was released June 4 by Chicago Review Press.

The apartment dedication ceremony is scheduled for Tuesday, June 11 at 4 p.m. at the site.

Updated, 6/10/19: This article was updated to clarify that Brian Basinger's partner used to live in the building.