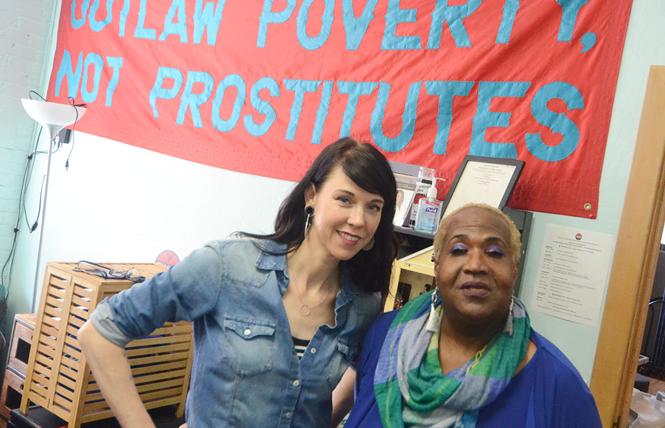 In 2004, it opened its own facility at 1372 Mission Street, in what became a rapidly gentrifying South of Market neighborhood.

"This year marks the 20th anniversary of St. James Infirmary, which provides medical, mental health, and social services to San Francisco's sex workers and their families," SJI Executive Director Toni Newman told the Bay Area Reporter. "Today, we have an annual budget of more than $1 million and 22 paid staff members. St. James Infirmary prides itself on serving people of all genders and backgrounds, with many staffers who are transgender or people of color."

In 2016, SJI was forced to move when the landlord sold that building. The San Francisco Department of Public Health helped the clinic secure a space on Eddy Street in the Tenderloin. Last fall, SJI moved to its current home in the San Francisco Community Health Center (formerly known as the Asian Pacific Islanders Wellness Center) at 730 Polk Street, a space shared with Shanti Project and Project Open Hand.

"As the only clinic and social service agency in the United States run for and by current and former sex workers, the work we do is both life-saving and unique," SJI deputy director Pike Long told the B.A.R. "For 20 years, St. James Infirmary has provided a safe haven for sex workers to heal, build community, and organize for their rights, free from the stigma and discrimination so prevalent in the rest of society. In these troubling political times, we know that our communities will help us to not only survive, but thrive as we move into the future."

Long, who identifies as queer, noted that sex workers face an increasingly hostile political and legal climate, including last year's passage of the Senate's Stop Enabling Sex Traffickers Act and the House's Allow States and Victims to Fight Online Sex Trafficking Act. Advocates say the legislation, jointly dubbed SESTA/FOSTA, makes it difficult for sex workers to connect with clients using websites and social media and has forced many into more dangerous working situations including street prostitution.

SJI receives funding from public sources including the San Francisco Department of Public Health and the Centers for Disease Control and Prevention and other nonprofits including the San Francisco AIDS Foundation, but it also relies on private philanthropy. The anniversary gala will help raise funds to establish an electronic medical records system, according to Newman.

Billed as a successor to the infamous Hooker's Ball hosted by St. James in the 1970s, the party will feature Broadway actress Jennifer Holliday, out comedian Marga Gomez, and singer Lawrence Beamen. A 6 p.m. VIP reception will be followed by a program of speakers and entertainers at 7, and an after-party hosted by Sister Roma starting at 8:30.

"More than ever, it's important for places like St. James to exist where sex workers can receive the expert health services they need and deserve in safe space free from judgment or discrimination," Sister Roma told the B.A.R. "I'm honored to celebrate the St. James anniversary by hosting the after-party. Like we always do, we are going to throw our heels up and have a rocking good time."

The SJI anniversary gala will take place Sunday, June 2, from 6 to 11 p.m. at Terra Gallery, 511 Harrison Street in San Francisco. Tickets are $200 for the main event or $50 for the after-party only. Tickets are available at https://stjamesinfirmary.org/wordpress/?p=4734.