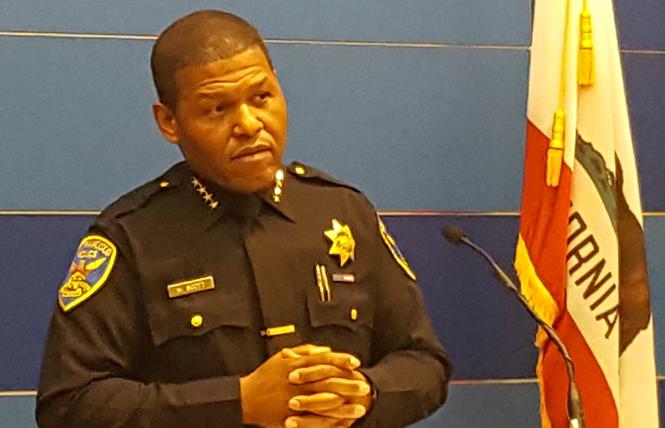 We are angry that city officials did not immediately and forcefully condemn the San Francisco Police Department's raid on a journalist's home and office earlier this month. This trampling of the First Amendment — and California's shield law — sets a chilling precedent that threatens a free press.

The buck stops with Mayor London Breed, and her initial reaction to the raid was a major disappointment. At first she supported the raid of freelance videographer Bryan Carmody's home and office. She stood by police Chief William Scott, who has said he's OK with the raid. That's wrong. As of Monday, Breed had slightly tweaked her response, and now says she is "not OK with police raids on reporters," according to the San Francisco Chronicle. We sure hope not.

The San Francisco Police Department conducted the raid to determine who leaked a copy of its death report on Public Defender Jeff Adachi, who was found unresponsive in a San Francisco home and later died. At first, Carmody refused to identify the confidential source so officers obtained a search warrant. Armed with that and a sledgehammer, they raided Carmody's home, handcuffed him, and seized 68 items, including cellphones and hard drives. When police found out he had a separate office in the city, they got a second search warrant and raided that location too.

In California, journalists are protected from being forced to reveal sources by the state's shield law. While the police department's action is alarming to every other news outlet in the area and First Amendment experts, the reaction by many city officials is even more distressing. Some think it's OK to search and seize journalists' property — a blatant violation of the shield law according to many legal observers. It's also deeply disturbing that two Superior Court judges — Victor Hwang and Gail Dekreon, a lesbian, signed the warrants in the first place. The San Francisco Examiner reported that Hwang and Dekreon knew the search warrants were for a member of the media. The judges themselves have not commented.

As much as Breed and others may have admired Adachi, and as ticked off as police brass were that the report was leaked to Carmody, it's simply not OK for law enforcement to raid a journalist's home and office. What SFPD should be doing — and Scott said at a Tuesday news conference that it is — is conducting an investigation into the leaked report, not going after journalists.

Scott held a hastily called news conference Tuesday afternoon. There, he read a statement that police investigators believe Carmody to be a possible co-conspirator in what Scott called the "theft" of the report "rather than a passive recipient of the stolen document." He acknowledged that "an SFPD employee was part of this" and alleges that Carmody paid for the documents.

Even if these allegations have merit, police had other alternatives to breaking down Carmody's gate with a sledgehammer. Carmody has said that he makes his living selling packages of news materials to media outlets. The package he put together on Adachi's death included photos and the police's two-page summary of the incident. Three TV stations bought the package from Carmody, according to reports. Progressive politicians are angry that the report was leaked because it noted that Adachi was with a woman who was not his wife. (The medical examiner concluded that Adachi died of acute mixed drug (cocaine and ethanol) toxicity. It also listed contributing factors of hypertension atherosclerotic cardiovascular disease. The manner of death was accidental, the medical examiner's report stated.)

Notably Supervisor Hillary Ronen, a progressive, said the raid on a journalist was not the right thing to do. Ronen, who had pushed police to investigate the leak, called the raid "bizarre" and said she was "very concerned by the actions of the Police Department." This week, Supervisor Rafael Mandelman, the board's only LGBT member, told the Bay Area Reporter he's "troubled and concerned." He said that he does not think police should raid journalists' homes or offices, but cautioned that some details are missing. He also noted that two judges signed off on the search warrants. Carmody is now suing, so Mandelman said a third judge will be looking at the matter.

"We're going to figure it out," Mandelman said, adding that if the raid is allowable under the shield law, then the city might need to do something to protect journalists locally.

District Attorney George Gascón had it right. "My office has not seen the warrant or the facts upon which it was based, but absent a showing that a journalist broke the law to obtain the information that police are looking for, I can't imagine a situation in which a search warrant would be appropriate," he wrote on Twitter Monday.

Scott acknowledged that officers did not consult with the district's attorney's office.

Non-journalists should be just as concerned over this blatant abuse of power, as our own longtime freelancer Ed Walsh wrote in an email to us. It's our job as a media outlet to pull back the curtain and tell you what your elected officials and public agencies are doing with your taxpayer dollars.

On Tuesday, the Associated Press reported that an SFPD attorney said that Carmody would get his property back, after the two sides appeared before Superior Court Judge Samuel Feng, though the legal issues in the case have not been resolved. That's a good first step for the department, which must be disqualified from using any of the information it gathered from the seizure and Scott should also issue a public apology. On Tuesday he stated the SFPD "fully" respects the First Amendment rights of journalists, even as he apologized to Adachi's family, the second time the department has done so. The public is owed a fuller explanation by the mayor of her position on the matter and state Attorney General Xavier Becerra should open an investigation.

The reactions from city officials betrayed San Francisco by blatantly threatening the constitutional principle of freedom of the press to publish and protect sources. They must do better.