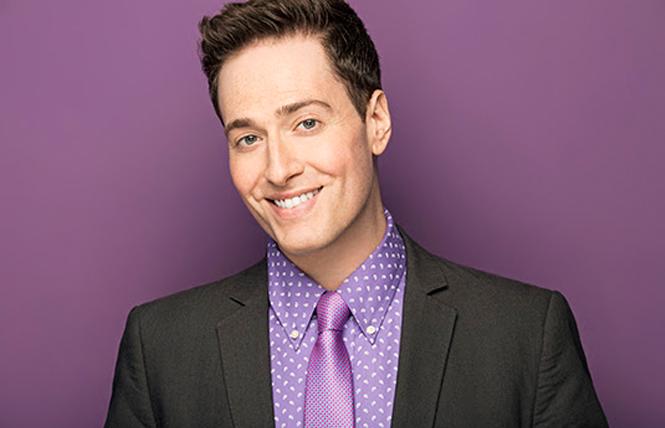 Randy Rainbow will be in the Bay Area this month.

So far none of the 20 Democrats running to be their party's presidential nominee next year, or thinking about entering the race, have been the focus of Randy Rainbow's acerbic wit or musical comedic chops. But the gay performer and vlogger expects at some point he will parody the various congressional members, local politicians, and party leaders seeking to defeat President Donald Trump.

"Absolutely! As people start announcing and throwing their hat in the race, my cast of characters is growing," Rainbow told the Bay Area Reporter during a recent phone interview. "Certainly, building up to the next election I will have a lot of material to work with. I expect everyone to make a cameo at some point."

So far, he doesn't have a preferred candidate in the race.

"Certainly, there are people I lean toward. I love Kamala Harris," he said, referring to California's junior U.S. senator who would be the country's first black and Indian American female president if elected. "I am not ready to officially endorse, but really anybody would do at this point."

Rainbow, 37, first attracted wide notice with his videos he posted after each of the 2016 Republican candidates dropped out of the race. He expects he will do the same for the Democrats next year.

"Yeah, for sure," he said. "The 'GOP Dropout' series really kicked things off."

He shot to true internet stardom with his "Braggadocious" video that parodied the first presidential debate in 2016 between former Senator and secretary of state Hillary Clinton, the Democratic nominee, and Trump, the GOP contender, when Trump made up the word "braggadocious." For the video, Rainbow retooled the song "Supercalifragilisticexpialidocious" from the musical "Mary Poppins."

As the B.A.R. noted in November that year, the video had been viewed almost 30 million times on Facebook within a month of its debut. Since Trump won the election, he and his administration have provided a wealth of material for Rainbow to work with.

The day Rainbow spoke with the B.A.R. in February, he had watched Trump's rambling news conference in the White House Rose Garden that was supposed to focus on the need for an emergency declaration to build a wall along the U.S. border with Mexico. But it turned into a bizarre rant on numerous topics that Rainbow said sounded ready-made to be a sketch on "Saturday Night Live."

"It is pretty insane; it is almost hard to lampoon this stuff," he said. "It is hard to know where to go to take it to the next level."

Capitalizing on his popularity and social media fame, Rainbow packaged his more popular musical parodies into a live 90-minute show he launched last year. He has been touring around the country and lands in the Bay Area this month, with shows April 18 at the Luther Burbank Center for the Arts in Santa Rosa and April 20 at the Masonic in San Francisco.

"I am doing all of my greatest hits," said Rainbow. "It is me and my band; I don't have a name for them yet. I should think of something cute like the Randy Rainbow Orchestra. It is usually a four-piece band."

Rainbow, which is his real last name, lives in Astoria, Queens in New York City. He has written material for various comedians, performed on stage in musical productions, and starred in a commercial for Orbitz alongside San Francisco native and queer comedian Margaret Cho.

He has close to 1 million followers on his Facebook page and close to 240,000 followers on Twitter. His YouTube videos can rack up anywhere from 158,000 views to 2 million.

A Trump bump
Open about his supporting Clinton three years ago, Rainbow has certainly benefited immensely having Trump occupy the White House. Asked if he was secretly wishing that the president would win another four years, Rainbow told the B.A.R. he will be rooting for his defeat.

"I am not secretly wishing for anything like that. I can say that honestly," he said.

By 2021 Rainbow said it would be nice to have a new cast of characters to lambaste.

"I always say country first. It has been great for my career but terrible for the country. I wouldn't wish this on anybody just for the sake of my material," he said. "On top of that by the time he is gone I will have had a good run and be ready to take on new people and new topics."

And he could use a breather from the breakneck pace of scandal and skullduggery that has been the hallmark of the Trump administration.

"It has been hard for me to keep up," said Rainbow. "I will be able to take a nap maybe when he leaves office. Or when we make him leave, depending on whatever happens."

Born on Long Island, Rainbow at the age of 10 moved with his family to south Florida. He lived in the Sunshine State until he was 22 and then returned to New York. Asked repeatedly if he is interested in seeking public office himself, Rainbow told the B.A.R. he doesn't foresee doing so anytime soon.

"People ask me that, but I don't know why," said Rainbow. "Never say never, but I don't have any expectations as of this phone call."

In fact, he doesn't see his vlogging as being political in nature. Rather, he sees himself as a truth teller.

"I am not a political pundit. My message is never political. I have more passion for the truth than I do for politics," said Rainbow. "At the end of the day I am going after more behavioral than political. As long as people keep saying crazy shit, I will always have material."

For more information about Randy Rainbow's tour and to purchase tickets, visit his website at https://www.randyrainbow.com/.