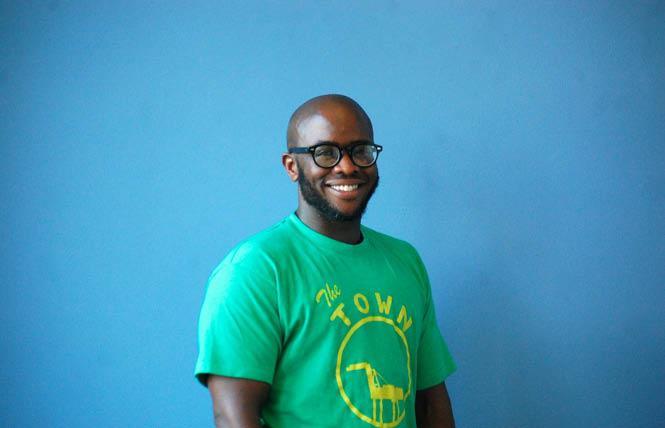 The first national transgender and gender-nonconforming march is now set for sometime in September after organizers did not receive enough donations to bring their vision to fruition this spring.

The National Trans Visibility March, organized by the National Organizing Team, was originally scheduled for April 1 in Washington, D.C. It was later moved to March 31, but has now been set for the fall.

"We don't have an official date yet because we are waiting to get our permits, but we are looking at dates in September," Shawn Demmons, a queer trans man and community engagement director for the coordinating team, told the Bay Area Reporter last week.

Though he did not disclose how much had been raised and how much is needed, Demmons said that the group wants to be able to have the event they envision and do not want to have to scale it back. The national march did receive seed money from its presenting sponsor, Gilead Sciences, the maker of Truvada, which is used for PrEP HIV prevention. The permits allowing attendees to march the streets of the nation's capital will be approved in the next few weeks, Demmons explained.

"We are hopeful and committed," Demmons said. He added that organizers want to continue grassroots fundraising. He called their vision of the march and correlating events "lofty," including that they are paying for the housing and travel expenses of some of the events' guests.

As previously reported by the B.A.R., the coordinating team will also host the Torch Awards, prior to the march, followed by the Trans Visibility Ball. The award ceremony will honor elder and new leading voices in the fight for trans equality. Masen Davis, a trans man who's chief executive officer at Freedom for All Americans and former executive director of the Transgender Law Center, will be honored. He has spent the last two decades leading efforts to advance equality for LGBT people at the state, national, and global levels. Also being recognized for his education and policy consulting on transgender issues is Jamison Green, a trans man who used to live in the Bay Area and worked on the passage of San Francisco's Transgender Protection Ordinance.

The ball, the location of which has not been announced, is "a time to celebrate ourselves and how resilient we are despite the level of violence we experience," Demmons previously said.

Demmons said he hopes people will support the march and understand its importance.

"It's important to support the trans community. It's one of the most marginalized communities in the country," he said. "African-American trans women are murdered as a result of transphobia, trans people are living in poverty, experience health disparities. These are all important reasons to donate to this trans march."

He continued, "Trans people need to come together on a national level."

The idea for the march was spawned, in part, from the Trump administration's disregard for the trans community, Demmons added, and said that the time is now for the march.

"We have an administration consistently working to rescind our rights and actively trying to erase trans identities," he said.

For more information on the march and to donate, head to https://transmarchondc.org/.

Grimm sued the Gloucester County School Board in 2015 after it adopted a policy that banned him from using the boys' bathroom. The board held a public hearing Tuesday, February 19, that discussed the possibility of allowing trans students to use the restroom that matched their gender identity.

Although the U.S. Supreme Court declined to hear Grimm's case, a federal court judge ruled in his favor in May 2018, denying a motion by the school board to dismiss the lawsuit brought by the student. Grimm has since graduated and now lives in California.

According to local news reports, Grimm attended the meeting that was said to be very divided.

"Like it or not, I, as a transgender man, deserve to be part of society in full. I deserve the same access to facilities as my peers. I deserve respect and dignity — so does every trans kid in Gloucester County and beyond," Grimm said at the meeting, reported CBS News 3.

The bathroom policy discussed at the meeting would allow trans students to use the restroom of their choice as long as the "student has appropriate medical documentation from a licensed, treating health care provider who specializes in the treatment of transgender individuals; has consistently asserted the student's gender identity for a period of at least six months; and has undergone treatment recommended by the student's health care provider, which may include social transition or hormonal therapy for at least six months."

The school board meeting comes just months before the trial is set to begin over its current bathroom rules. Grimm has publicly said he would drop the suit if the board implements a policy giving trans students equal rights.

He called the policy resolution "far from perfect, but would represent an important first step for Gloucester." The policy "would also send the message to school districts across (Virginia) and the country that discrimination is unacceptable," he told the Associated Press.

Formal Opinion 485 was issued on Valentine's Day by the ABA's Standing Committee on Ethics and Professional Responsibility, according to an ABA news release.

It also states that judges who choose to opt-out of marrying all couples to avoid marrying same-sex couples "may be interpreted as manifesting an improper bias or prejudice toward a particular class."

The guidelines can be viewed at https://www.americanbar.org/content/dam/aba/images/news/2019/02/formal_op_485.pdf.