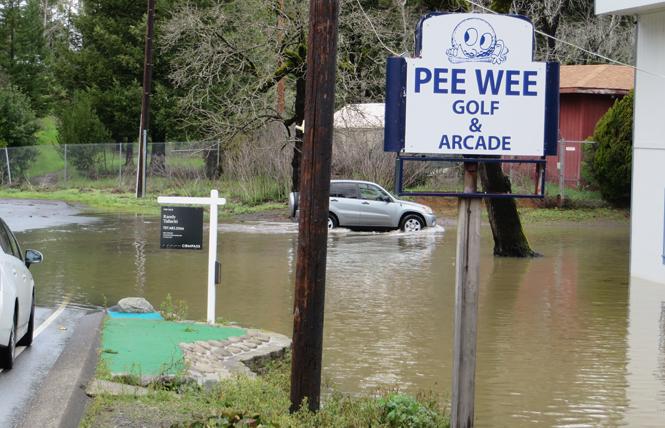 Cars slowly ford a road next to the flooding Russian River at 1 p.m. Friday, February 15, when the river level was 33.1 feet. Photo: Charlie Wagner

In a surprising follow-up to headlines about the rising Russian River, the Russian River Chamber of Commerce and multiple LGBTQ-serving businesses said Guerneville was ready for visitors by Saturday of Presidents Day weekend, two days after the river reached flood level on Thursday, February 14.

As Robert Frederick, co-owner of Rainbow Cattle Company bar in Guerneville, put it, "Nothing has changed, and we're open for business."

The National Oceanic and Atmospheric Administration defines "flood level" for the Russian River as 32 feet and above. The river exceeded that level last Thursday morning and peaked at 34.8 feet on Friday at 1 a.m., according to the NOAA. Earlier forecasts had ranged up to 40 feet.

The Russian River last week also failed to reach the level many locals consider critical.
Guerneville is in an unincorporated section of Sonoma County, so the Russian River Chamber of Commerce is a key participant in local emergency preparations.

As Elise VanDyne, the chamber's executive director, explained, "We prepare with outreach, connect with county and state resources, and post information to our social media pages, including information such as where to get sandbags and what to expect with the water level."

In the last week, she recalled, "We fielded a lot of calls asking about road openings and flood levels. We have a link on our homepage (http://www.russianriver.com) with information about river levels, and that link is definitely the more followed information during this time period."

Describing the Rainbow's response to the NOAA forecast, Frederick said, "The only thing we had to do was alert some employees that they might not be able to drive to the bar and make sure local bartenders were available. We did move some bottles close to the floor to a higher shelf, but I had no fear because we're at a higher elevation in the downtown area."

He admitted, however, "At first it reminded me of the 1986 flood, which happened 36 years ago to the day, but then the feeling passed."

Jeff Bridges, general manager of the R3 Hotel, revealed how his business reacted.

"We have a file with written procedures and go on auto-pilot when the river rises," he said. "Those prone to flooding stock up on supplies, though we did not need to do that."

Things were different in 1986 when another "atmospheric river" condition pushed the Russian River to 49 feet, and people had to be evacuated by helicopter from the historic Guerneville Cemetery. There were two more destructive floods in the 1990s.

Nowadays, Bridges said, "The R3 Hotel has its own generator, so everybody flocks here when there are power outages. This week we lost power for only for 30 minutes."

The R3 was almost sold out for the holiday weekend, he boasted.

For residents, thanks in part to the efforts of the Federal Emergency Management Agency, virtually all properties in lower elevations have been raised, moved, or demolished. FEMA underwrites house insurance in flood-prone areas of Sonoma County and usually requires houses to be raised in order to be insured.

VanDyne also noted, "Cleanup seems more manageable due to what I see as overall progress ... and the efforts of the Clean River Alliance. We also have fewer homeless encampments along the river that are at risk, due to the proactive efforts of West County Community Services."

"I've been here a year and was impressed by how prepared and calm everyone is," VanDyne added. "The river is a living part of this community. For the most part, we are prepared to adapt to the levels of the river while keeping businesses open."

Frederick pointed out other differences from 1986.

"Power outages are much rarer, Fife's Creek floods much less due to dredging by the county, and none of our employees lost their housing this time," he said.

Bridges said, "People in town know each other and stick together. I'm proud of the town. Everyone pulls together."