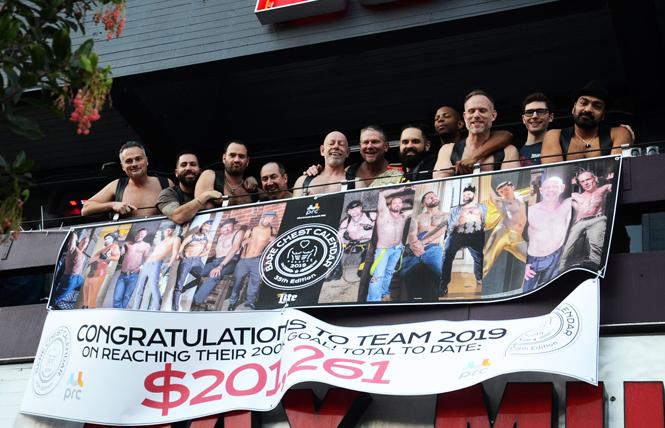 The 2019 Bare Chest Calendar men celebrated their record-breaking fundraising total of $201, 261 during a reception at the Lookout January 12. Photo: Rick Gerharter

Bare Chest Calendar's class of 2019 joined executives from beneficiary organization PRC to celebrate the calendar's publication and to commemorate the $201,261 raised by the calendar's models.

It was the first time in the long history of the calendar that it broke the $200,000 fundraising mark, officials said.

The party took place Saturday, January 12, at the Lookout.

"One of the best things about the calendar is not just the community involvement, but the brotherhood that gets created in each class," said Demetri Moshoyannis, PRC's managing director of strategic partnerships.

Moshoyannis told the Bay Area Reporter that there are 14 people in the current calendar class.

Some of the calendar men spoke about what the project means to them.

"I love that this is an organization that you can be a part of whether you are 25 or 99, as long as you are about helping the community," gay 27-year-old Andrew Hirst, who is the youngest calendar man, told the B.A.R. "When I started with the calendar, my age was 26, which was the same age backward as the oldest member of the 2019 calendar, Joe [Pessa], who was 62."

The men chosen for the 2019 calendar participated in a variety of fundraising activities last year such as bar crawls and events like Big Muscle Party-Dore Edition.

"All year long these guys are doing fundraising events, and it adds up," said Moshoyannis. "This is the 35th year of the calendar."

The final selections for the calendar were made in 2018 at a pageant at DNA Lounge, with 20 candidates vying for 12-14 positions. There were six judges: Hunter Fox, Ed Mathews, Jawn Marques, Will Swagger, Ranj Singh, and John Tomlins, all of whom are past calendar men.

PRC CEO Brett Andrews was delighted by the amount of money that was raised for this year's edition.

"This unprecedented and extraordinary year is only made more meaningful against the backdrop of the current U.S. administration," he said. "In so many ways this unmatched Bare Chest Calendar fundraising achievement is a positive resistance to what so many are experiencing. While extraordinary, this is not surprising for San Francisco."

Andrews also explained how the money would be spent.

"As in years past these crucial funds support our HIV services that cover legal representation, workforce development, and emergency financial assistance," he said. "With our new merger with Baker Places Mental Health and Substance Abuse Services we can now do residential treatment."

Gay District 8 Supervisor Rafael Mandelman presented a proclamation, signed by the entire Board of Supervisors, to Andrews in commemoration of the calendar.

"I am here because you are all amazingly hot, so how could I say no to showing up for a celebration of the Bare Chest Calendar," Mandelman told the crowd. "For years, for decades even, folks in San Francisco have been talking about the need for nonprofits to be smarter, to bring folks together and to have different organizations consider mergers, and you guys did it.

"As I think of the work that needs to be done to get homeless folks, mentally ill folks, and substance using folks off the streets and into care — if we're going to do that work effectively, it's because we're going to dramatically expand the work that PRC and other organizations do," he added. "So I want to thank you Bare Chest Calendar men and thank you PRC for the tremendous work you do for San Francisco."

Gay former state Senator Mark Leno quipped that he stood before the crowd "naked, without proclamation."

"I have nothing to present, other than to add my thanks to PRC," Leno said. "Going back 35 years, for those of us who were around in 1984 when we had to literally save our own lives because we had a president who couldn't even say the word AIDS, so over 20,000 young, mostly gay men died of a virus — we had to step forward and put together what is now known as the San Francisco model, and so much of it is community-based organizations like PRC and its predecessors, now successfully merged, to provide the services needed because government couldn't do it on its own, especially with the vacuum of leadership that we had at that time. So now, 35 years later, it's quite a record accomplishment."

PRC merged with AIDS Emergency Fund and Baker Places in 2016.

Pessa, now 63, said he had concerns he might not fit the profile for a calendar man because of his age.

"But I ran anyway and discovered that the calendar is for everyone," he told the B.A.R. "When the calendar men were announced, Andrew was Mr. November, at 26, and I was the oldest, at 62. As we got to know each other we discovered that we had more things in common than the things that separate us."

This year's Bare Chest Calendar is now available. To purchase one, visit http://barechest.org/. Potential calendar men for the 2020 edition can also find out about this year's competition, which begins with preliminaries February 8 at the Powerhouse.