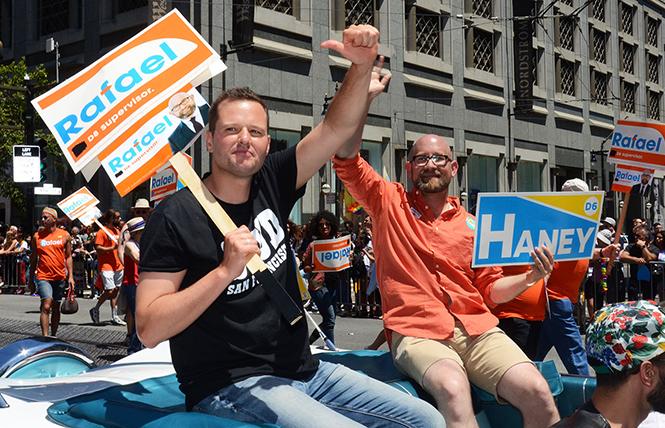 Next week new members of the San Francisco Board of Supervisors will be sworn in and the board will elect a new president, who will need to work closely with Mayor London Breed to pass legislation to address the challenges facing the city. Here are some of the issues we'd like to see accomplished.

Health director
The unceremonious departure of former Health Director Barbara Garcia last summer resulting from a contracting scandal left a huge void in the Department of Public Health and is one of the mayor's major personnel appointments. In an editorial board meeting in December, Breed told the Bay Area Reporter that the city had received "a large number of incredibly talented, qualified applicants." (She declined to say how many.) Since the 1990s, San Francisco has had either lesbian or gay health directors (Drs. Sandra Hernandez and Mitch Katz, followed by Garcia) and we certainly would like to see that continue, mostly to oversee the HIV/AIDS epidemic and the city's Getting to Zero initiative. But whether the new director is LGBT or straight, he or she must commit to continuing Getting to Zero, which aims to make San Francisco the first city to achieve the UNAIDS goals of eliminating new HIV infections, deaths due to HIV/AIDS, and stigma against people living with HIV. It relies on a three-prong strategy of expanded access to PrEP, rapid initiation of antiretroviral therapy, and retaining HIV-positive people in care.

Additionally, the new director must be on board with the city's plan to open a supervised injection site pilot program, if the necessary state law authorizing it is passed by the Legislature and signed by incoming Governor Gavin Newsom, which is likely. The mayor and health advocates opened a limited demonstration site last summer in a first step to educate the public about the plan. The mayor and Board of Supervisors should continue such outreach, as well as work to identify a potential site. DPH will likely be a lead agency, so whoever takes over must support it.

"What I am looking for really is someone who can begin really pushing for health challenges that exist in San Francisco, along with social justice," the mayor told us. "Concentrating a lot of efforts on mental illness. Not just the mental illness of the people we see who clearly are in need of help and that struggle on our streets."

The Health Commission is reviewing candidates, and Breed said she expects to name a new director by February.

Trans, youth shelters
Breed told us money has been budgeted for a Navigation Center exclusively for transitional age youth (18-24), including LGBTs. The mayor's office is in the process of identifying a location — always the hardest part when planning for shelters or Navigation Centers. We believe that such a facility should be located in the Tenderloin or the Castro, since that's where most of the services for LGBTs are located. Gay District 8 Supervisor Rafael Mandelman and incoming District 6 Supervisor Matt Haney should work together on finding a site in one of those neighborhoods.

Regarding a shelter specifically for trans people, the mayor said she is looking at it, but it is not imminent. It should be. Again, the supervisors can help by identifying a site and advocating for funding in the next budget. Breed said she is looking at a new project called a safe center, which would be a cross between a shelter and a Navigation Center. She said there is a location for a non-LGBT specific safe center that could have 120-130 beds and people could still bring their pets and partners. The goal of a safe center is to help people transition into permanent housing.

As readers know, existing city shelters are horrible, particularly for trans people. Yet the number of trans homeless people in the city demands some type of facility for them. We'd like the supervisors to work on this with the mayor.

HIV/AIDS
The board and mayor need to continue backfilling any federal cuts to HIV/AIDS services. This has been going on for years since the federal government reallocated most funding to other states, leaving San Francisco to pick up the slack.

Beyond allocating funding, the city must develop programs to make PrEP accessible for everyone, especially people of color. African-Americans are disproportionately affected by HIV yet many are not on PrEP. This needs to change. Incoming District 10 Supervisor Shamann Walton and the mayor can help by reaching out to the African-American community and stressing the importance of PrEP. Nonprofits should continue to develop awareness campaigns with communities of color, so that the message reaches the targeted audience.

Eagle Plaza
The leather community is counting on Haney to introduce a major encroachment permit for Eagle Plaza in the South of Market neighborhood this month. This plaza has been in the works for years, and should be open in time for the 2019 Folsom Street Fair. Construction on the plaza cannot begin until the Board of Supervisors approves this permit. While the plaza's design has been scaled back, at the insistence of the public works and the fire departments, it will be a great tribute to the leather-kink communities in what has become a gentrified neighborhood.

Senior housing
The mayor and board could do more to build affordable LGBT-friendly senior housing. Over 1,300 people applied for the lottery that will be held later this month for 95 Laguna, the second phase of Openhouse and Mercy Housing's LGBT-friendly housing project that has 57 units. Obviously, there are thousands of seniors, gay and straight, who need affordable housing. City leaders need to identify locations and get these projects in the pipeline. We are tired of the squabbling among politicians and activists when additional affordable housing units are needed, period.

SOGI data
Last fall, we reported on the fitful rollout of city agencies tasked with collecting sexual orientation and gender identity (SOGI) data. The main issues the departments have grappled with are the training of staff on how to ask the SOGI questions, the wording of the questions related to gender identity, and updating the electronic record systems being used.

In a city report, the Aging and Adult Services Department was singled out for being "at the forefront" of collecting SOGI data, but even it has encountered issues. Other city departments are in the process of adjusting databases or training staff about effective and sensitive methods to ask the questions. Such work needs to continue. It's important that the city collect this demographic data so that services can be started or expanded to meet residents' needs.

The supervisors and mayor should remain committed to gathering the data and working with departments to ensure the necessary training takes place.