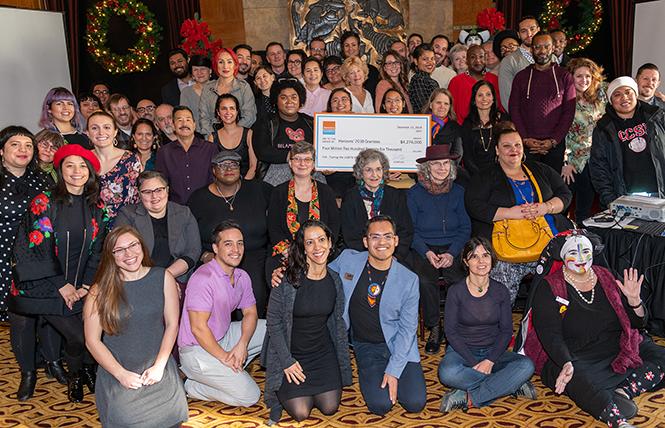 A celebratory breakfast was held December 13 at the San Francisco City Club, where Horizons officials gave out 45 grants totaling $409,532.

Funds were awarded in the arts, advocacy and civil rights, health and human services, community building, and leadership, and encompass programs that focus on youth, the elderly, immigration, trans rights, LGBTQ history, and capacity-building. In a news release, Horizons said that 71.7 percent of the grants were given to LGBTQ-specific organizations, with the remaining 28.3 percent distributed to organizations that have specific LGBTQ programs, arts, or cultural projects.

"Horizons' grantees paint a remarkable portrait of the diverse Bay Area LGBT community," Francisco O. Buchting, vice president of grants, programs, and strategic initiatives, said in a statement. "Each of our grantees, whether it is a small LGBTQ organization or an LGBTQ program within a larger organization, provides invaluable programs and services that serve the needs of our entire community."

The program began with a short video in which representatives of three organizations, Transgender Law Center, Curry Senior Center, and LGBTQ Connection spoke of the work they do for their communities and how Horizons has been helpful in achieving their goals.

Ash McNeely, a member of Horizons board of directors, spoke at the breakfast.

The Sisters of Perpetual Indulgence, one of this year's grantees, sent Sister Gaia and Sister Pansies to represent the organization. Both offered a blessing from the podium.

"May the blessings of the earth be on you," they said in part. "May you ever have a kind greeting for those you pass along the way. May the earth be soft under you when you rest at the end of the day, may the earth sustain you, and may you sustain her in return."

Representatives from two other grantees also addressed attendees. Devi Peacock and LeahAnn Mitchell from Oakland's Peacock Rebellion spoke of their work as a Bay Area grop of queer and trans people of color artists, activists, and healers who "make sassy, sexy art to help build a culture of social justice, with an emphasis on healing justice."

Jennifer Malone, executive director of the Spahr Center in Corte Madera, spoke of her organization's work in supporting Marin County's LGBT community and those in the county who are affected by HIV.

Horizons officials said they look forward to the grant party all year.

"It's one of the highlights of the year to be here," said Roger Doughty, Horizons president. "This is a very competitive process. There are lots and lots of wonderful organizations and outstanding projects, and yours, all of yours, stood out. You produce that queer arts performance that changes a life. You offer that listening ear when the rest of the world seems not to hear. You link up someone in desperate need with the attorney to protect their rights. You make sure that young queer person finds a place to feel safe."

Doughty added that the work of the grantees is made harder by the current political climate.

"We live in an age of divisiveness," he said. "Powerful forces and strident forces are trying to tear us apart or prevent us from coming together in the first place. Our community and our movement must be about uniting, we must be living diversity and know that diversity is our power, not our weakness."

Several grantees spoke to the Bay Area Reporter about how the monies they receive will help them in their work.

Shawna Virago, executive director of the San Francisco Transgender Film Festival, said that she didn't know the amount of the grant they had received.

"Our bookkeeper, who is not around until next week, has that information," Virago said. "Horizons' funding will allow the film festival to continue creating opportunities for trans and gender-nonconforming filmmakers and communities, and to keep fighting transphobic representation of trans people in film, especially for DIY filmmakers."

"The grant will help us reach even more people, share our impact, and inspire them to make donations of all sizes to support our work," said Roberto Ordeñana, deputy executive director of the center. "In the next year, the center is focusing on program growth to meet demands for services for some of the most vulnerable members of our community, launching deeper services for homeless LGBTQ youth and for trans and gender-nonconforming employment seekers. This expansion couldn't be possible without the investment of public and private partners and our entire community."

Turn Out, an organization that connects volunteers with LGBTQ causes, was given a $5,000 grant.

"We're a new organization," Jack Beck, a gay man who's Turn Out's executive director, told the B.A.R. "We launched our programs in March of last year so this grant really helps us to support our overhead and provide our basic services. We connect volunteers with LGBTQ causes around the Bay Area, and since we launched our programs more than 3,000 volunteers have signed up. So there's a strong need for these services, and Horizons is helping us meet that need."