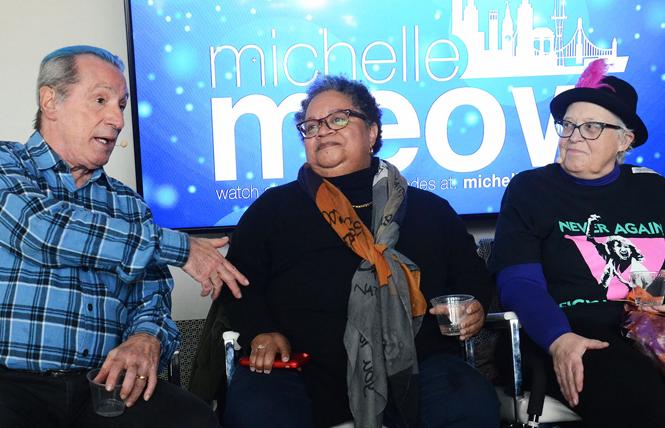 Years before states voted to ban same-sex marriage, a California ballot measure that would have barred gays and lesbians from teaching in public schools was soundly defeated at the polls, marking one of the first major victories for the LGBT rights movement.

"40 Years After the Briggs Initiative: Our Power in Speaking Up and Speaking Out," was recorded for "The Michelle Meow Show" Thursday, November 29, at the Commonwealth Club. The show was co-hosted and moderated by John Zipperer, who manages the Commonwealth Club's media and editorial departments.

Zipperer pointed out that there was a whole generation of LGBTQ people, as well as allies, who have never heard of the Briggs initiative, which was Proposition 6 on the November 1978 ballot.

"I grew up in Wisconsin and did not hear about this until the late 1980s, and that set off a number of questions that I've looked into over the years," Zipperer said, as he introduced the panel.

Zipperer read a portion of the initiative. "Anyone who is a public school teacher, a teacher's aide, an administrator, or a counselor could be fired if they were found to have engaged in, quote, public homosexual activity, end quote, and this was defined as homosexual sex which was not discreet and not practiced in private whether or not such an act at the time of its commission constituted a crime," Zipperer said. "And public homosexual conduct, which was defined as the advocating, soliciting, imposing, encouraging, or promoting of public homosexual activity directed at or likely to come to the attention of school children and/or other employees."

Zipperer then turned the discussion over to the panel, each one of whom shared their thoughts and memories of fighting the initiative.

"We were getting very upset at hearing all the homophobia that was attached to teaching and out gay people," said gay former state assemblyman, San Francisco supervisor, and school board member Tom Ammiano. "The most serious homophobic remarks I heard were not necessarily on the playground but in the teacher's lounge."

At the time of the Briggs initiative battle, Ammiano was a public school teacher.

Ammiano recalled a "rag-tag group of activists" getting together.

"I didn't even know what a press conference was," he said. "Most of the press was very snide, this was like a freak show to cover. The biggest pushback came from the closeted gay teachers and that was very painful."

He noted that the out teachers went to the school board and said that they wanted to be included in the district's non-discrimination clause. "The board scoffed at us," Ammiano said, adding that they marched in front of the school board office, joined by straight teachers.

"About three weeks later the school board voted," he said. "We almost fainted. They voted to include sexual orientation."

That was in 1975, and a few years later John Briggs, a conservative state senator, wrote the initiative to ban gay teachers.

Gwenn Craig, a lesbian activist who served as the manager for the No on 6 campaign, worked alongside Ammiano and the late Harvey Milk.

Craig recalled getting involved with the movement after Anita Bryant, a beauty pageant winner and pop music singer who was then a lifestyle ambassador for the Florida Citrus Commission, ran a successful campaign to overturn a gay rights ordinance that had been passed in Dade County, Florida.

"There were a lot of mass meetings and town halls that were happening in San Francisco in reaction to what was happening in Dade County," Craig said.

Initial pessimism
Craig recalled the 1977 election of Milk to the San Francisco Board of Supervisors, who was the first gay person to be elected to office in California. It was at this time that Craig became a part of Milk's inner circle — Milk mentored her when she was made media coordinator of this group of activists.

"After becoming involved with him and with his campaign, when it was time to respond to what was happening in California, Harvey thought of me and my very good friend, Bill Kraus, as people who would do the job of managing the San Francisco arm of the No on 6 campaign," she said. "People went into that campaign with a great deal of pessimism. We had seen in that year of 1977 three cities overturn their anti-discrimination ordinances."

But, according to Craig, people were determined to defeat Briggs and she soon amassed a card file of 700 volunteers. It was a campaign in which, rather than just drop literature, volunteers knocked on doors and talked to people. Many of the volunteers were not yet out to their families or employers and were still grappling with being gay or lesbian.

"To knock on a door and know that you're there to talk about Proposition 6 on the no side meant that the person answering the door was probably going to assume that you were gay or lesbian," Craig said. "I would think of all the volunteers as such brave souls to do this because they were so committed, they were willing to overcome any trepidation. They just felt it was so important."

They canvased all 500 precincts in San Francisco.

"Because of that effort, and the kind of vote totals that we were able to put into the pot, I think it contributed greatly to our ultimate victory and defeat of the proposition," said Craig. "The winning percentage was 58 percent."

Sue Englander is a bisexual lecturer and historian at San Francisco State University.

"We were a new generation of how to conduct politics," said Englander. "What we brought to the campaign should really be a template for future struggles. Proposition 8 in 2008, in which Californians voted to say that marriage was only between a man and a woman, did not have that kind of a campaign and it was voted in, so lesson learned. We wanted to promote the kind of grassroots, vital campaign that involves people and gets them invested in a political idea and a political community."

Englander recalled handing out cards while she was canvassing. "The person you are talking to is a homosexual," the card read. "And this is what a homosexual is. Please know that we are human beings, just like you"

"We would give these cards out, door to door," she said. "That year you could not turn around without seeing a speak-out, a rally, church meetings, Girl Scouts organizing for No on 6 — our tactic was ourselves, our organizing, our fresh way of doing things, and the communities that came behind us, which was unprecedented. It was a grand time for witnessing a gathering of support not just for this issue, but for the community, for the movement, and for greater human rights in San Francisco. This campaign led to other types of movements, other types of initiatives."

Pat Tibbs, an 80-year-old lesbian who attended the talk, told the Bay Area Reporter that she greatly enjoyed hearing what the speakers had to say.

"This is one of the best shows I've seen Michelle and John do," Tibbs said. "It offered a powerful message that is still needed in the 21st century. Once I saw the subject I had to be here because they helped me come out in the middle of my life and I'm very grateful."

Craig told the B.A.R. that she also enjoyed the panel.

"It's good to reminisce with people like Tom and Sue who were there at the time," she said. "It's so easy to talk about things that we lived, the ability to do that today was very enjoyable."

The entire discussion, which runs 66 minutes, has been posted at the Commonwealth Club's website: http://www.commonwealthclub.org. Click "Watch and Listen," then choose "All audio."

The GLBT History Museum, 4127 18th Street in the Castro, is currently showing an exhibition about the Briggs initiative that runs until January 20.