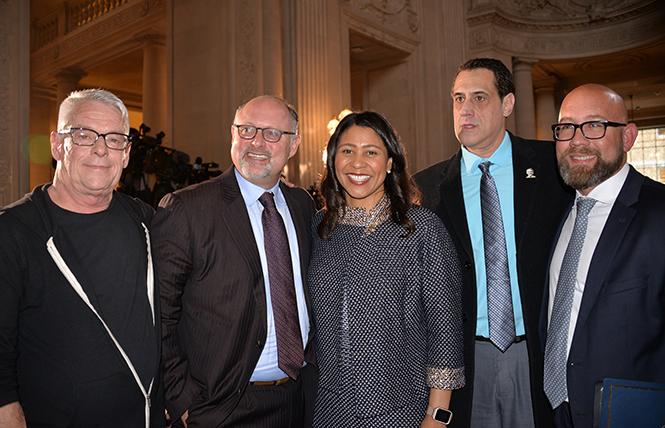 Gay District 8 Supervisor Rafael Mandelman and Mayor London Breed, who were both small children at the time of the 1978 assassinations of mayor George Moscone and supervisor Harvey Milk, held a special commemoration under the rotunda of City Hall Tuesday afternoon to honor the two men.

They both credited their political predecessors with laying the groundwork for their own elections 40 years later this past June.

"Young people today may not be aware of how significant it was to have Harvey Milk as the first openly gay elected leader in the city," said Breed, who was 4 years old in 1978. "Mayor Moscone was making the kinds of appointments that were just not happening here in San Francisco. He made sure to appoint African-Americans, women, and LGBT people. It was significant then and something we take for granted today."

Mandelman, 45, noted that the decisions made by Moscone and Milk paved the way four decades later for Breed to be the city's first black female mayor and for him to serve on the board, though his being the lone out supervisor is a low point in terms of LGBT representation on the board in recent decades.

"We live in the city these men made," said Mandelman, who later added, "Thank you Harvey and George."

San Francisco will never be the same after losing the two progressive leaders, said former mayor Willie Brown, who served with Moscone in the state Legislature and worked with him in 1975 to overturn California's anti-gay sodomy law.

"It was so many years ago that things happened in this City Hall that should not happen in any city hall anywhere in this nation," said Brown, 84, adding that his friend "George Moscone's politics inspired all of us."

It was just five years ago on November 10 that Jonathan Moscone stood on the mayor's balcony inside City Hall to wed his husband, Darryl Jude Carbonaro. The well-known arts leader and advocate said he agreed to return this week to the ceremonial spot in order to celebrate the life of his late father and not to mourn his death.

"What we miss is the man himself," said Moscone, 54, whose father taught him and his siblings how to play tennis and schooled them in progressive politics. "We didn't see enough of him when he was alive and we would do anything to see him again."

Milk's gay nephew, Stuart Milk, recalled how his uncle had taken him to opening night of the Broadway musical "Joseph and the Amazing Technicolor Dreamcoat," which he had co-produced, and brought him backstage after the show to meet the cast. He was the only family member he felt close enough with to talk about how, as a 12-year-old, he felt there was something different about himself.

"He was the only person in my life who accepted me and who I could say anything to. I didn't have the same relationship with my father that I had with Harvey," said Milk, who was 17 and in college when his uncle was killed. "I lost that touchstone and color in my life that day."

Noting that on Monday he had joined the picket line with Marriott hotel workers going on their 55th day striking for a better contract, gay activist Cleve Jones said he could think of no better way to honor Milk and Moscone. A confidant and aide to Milk, Jones saw his friend's legs sticking out into a hallway inside City Hall the morning of the murders.

But when he saw the sea of candles held by mourners in the plaza in front of City Hall on the evening of November 27, 1978, Jones knew that the fight for equal rights that Milk and Moscone had helped lead would not die with them.

"I knew I was wrong. It was not over; it was just beginning," said Jones. "Those two men taught us how to fight, and to love each other, and to hold on to that dream that makes this city so special."