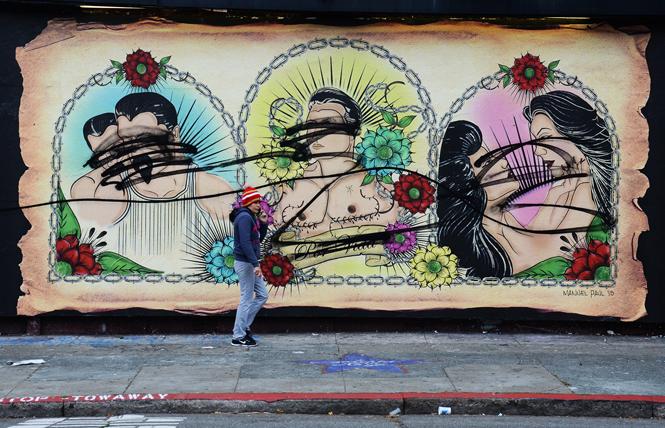 Galería de la Raza, which is now threatened with eviction, has also faced anti-LGBT actions during its history. In June 2015, a gay-themed mural on the Bryant Street exterior wall of the gallery was tagged with black spray paint. Photo: Rick Gerharter

Galería de la Raza is an institution that is deeply rooted in the Mission district's identity of culture, art, resistance, and celebration. It's what makes the Mission district the Mission. Since the beginning Galería has offered cultural performances by Latinx and LGBT artists, musicians, and more. These events hold the values and beliefs of its community and are central to the Chicano/Latinx experience.

As a gay Latino man raised in the Mission district who straddles both the Mission and the Castro, Galería has become a place that has integrated LGBTQs, the trans experience, and Latinx culture. It has emerged from its roots of embracing and enhancing the lives of all in the community through the arts. It became a galvanizing and unifying force of two worlds that many times were at odds.

At any of their events you will see our LGBT familia, Latinx trans brothers and sisters, elders, lowriders, and children sharing comida, poetry, performance, and art. Unified by culture and love. At a time when the Mission district is under siege with gentrification and displacement, its residents with a long history in the Mission are being torn apart by greed and by those who believe its progress when communities of color and marginalized people are forced to leave. Galería is a haven and a beacon of strength from the everyday realities Latinos face. Esta Noche and La India Bonita on 16th Street are where we saw community and people that looked like us. They became safe spaces to be who we are as Latinx and LGBT. They are both now gone.

Today, Galería is under attack from the same greed that has infected many. After 46 years in the same location at 2857 24th Street, a legacy business, and an anchor to the Calle 24 Latino Cultural District, it may very well lose its historic space. Unable to speak with their landlord and only a representative, Galería officials have received a three-day pay or quit notice. They are likely unable to meet the conditions set by the landlord that will create a financial burden to the institution. This includes a 100 percent rent hike and capital improvements to the space. Galería and the community are asking the landlord for a fair and reasonable lease.

In the true spirit of Galería in which it was formed, we will continue to fight for the right to be, to exist in dignity, and to self-determinate our future. We urge everyone to join us and contact GBA Realty at mailto:info@gbarproperties.com and to the NG Family Trust at mailto:workhorserx@yahoo.com.

Erick Arguello is the founder and president of the Calle 24 Latino Cultural District in the Mission. For more information, visit https://www.calle24sf.org/en/.