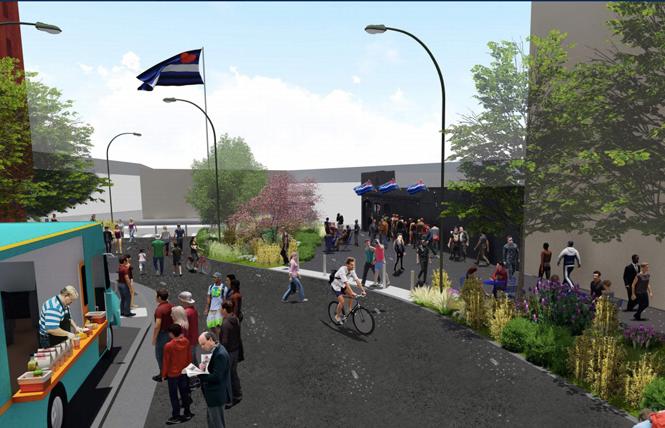 A proposed rendering of Eagle Plaza will be reworked. The grasses will be swapped out for succulents and the number of trees planted will be reduced. Photo: Courtesy Place Lab

Due to safety issues voiced by the city's fire department, a less prodigious design for a leather-themed public parklet in San Francisco's South of Market neighborhood is making its way through the approval process.

It falls within the boundaries of the LGBTQ cultural heritage district city officials created in western SOMA to celebrate its being the home of the city's leather community. Backers of the Eagle Plaza, named after the gay bar it would front, see it serving as a focal point and main gathering spot for the LGBTQ district.

For nearly two years proponents of the plaza project have been seeking final sign off from various city departments on its design, which the planning commission approved in February 2016. Access issues for fire trucks and other safety vehicles have proved to be a major sticking point and prompted tweaks in the layout of the parklet, which will be built on 12th Street between Harrison and Bernice streets.

Place Lab, which was started by Build and this summer merged with the nonprofit San Francisco Parks Alliance, is overseeing the plaza design. In presenting it Monday, October 15, for a fourth time to the Arts Commission's Civic Design Review Committee, program manager Mark Bonsignore explained that the plaza's greenspace had been reduced in order to accommodate the needs of the fire department.

Rather than reduce the width of the street to 14 feet, as had been proposed, the design now calls for a 28-foot-wide curved street allowing for two-way traffic through the plaza. The change was made in order to ensure fire trucks and other safety vehicles could easily navigate through the area. Bollards will be used to close off the street at both ends when special events are held on the plaza.

A change was also made to the border for a gathering space in front of the Eagle bar dubbed the Eagle Porch so that fire trucks would be able to back into the area and be able to turn around inside the plaza. San Francisco Public Works axed having permanent seating in the plaza, said Bonsignore, preferring instead for removable chairs and tables.

The plans still call for relocating the bar's flagpole sporting the leather flag into one of the plaza's planting areas in front of it. Sidewalks at both entrances into the plaza would be painted the colors of the leather flag, which features a red heart and blue, black, and white stripes.

The ground surface of the gathering spaces fronting the Eagle bar and the roadway would be a darker hue than that of the gathering areas adjacent to the new housing and cafe proposed for the corner of 12th and Harrison streets. While the city is requiring that streetlights be used in the plaza, the design team is proposing that they be dimmer than normal.

The number of trees for the plaza has been curtailed and their location restricted due to the presence of numerous utility lines running under the roadway. And rather than using grasses, the landscape plan now calls for mostly succulents that bloom at different times of the year.

Arts Commissioner Kimberlee Stryker, who chairs the committee, noted that the earlier designs for the plaza were "initially very ambitious," and what is now being proposed "is a very simple design." She suggested it would have been helpful for the plaza design to first be reviewed by the city agencies before being presented to the arts oversight body.

Fellow Commissioner Lydia So thanked the design team "for your continual effort to bring this closer" to approval. She asked that the plaza proponents ensure the fire department had no issues with where they want to put the flagpole and an area for food trucks before coming back to the arts commission for a final vote.

While the committee signed off on the overall plan for the site, it asked that the design team return with a comprehensive planting plan, updated renderings, and images of the seating to be provided before it voted on Phase III of the project.

As the Bay Area Reporter noted in a story last month, it remains unclear when city officials will approve the plaza's major encroachment permit, thus allowing construction to begin. Bonsignore told the B.A.R. this week that, "We are currently receiving final feedback from city agencies as well as maintenance and resolution literature from the City Attorney's office. Once we receive this, we should be in the clear to receive our MEP, which, hopefully, can be completed by the end of the month."

The parklet's estimated cost is $1.85 million. In addition to Build's contribution, the city awarded $200,000 in grant money to the plaza. The Friends of Eagle Plaza is seeking donations to cover the remaining $150,000 in costs and netted $7,000 through outreach efforts at the Folsom Street Fair.

They hope to break ground in early 2019 and dedicate the plaza ahead of next year's Folsom Street Fair at the end of September.