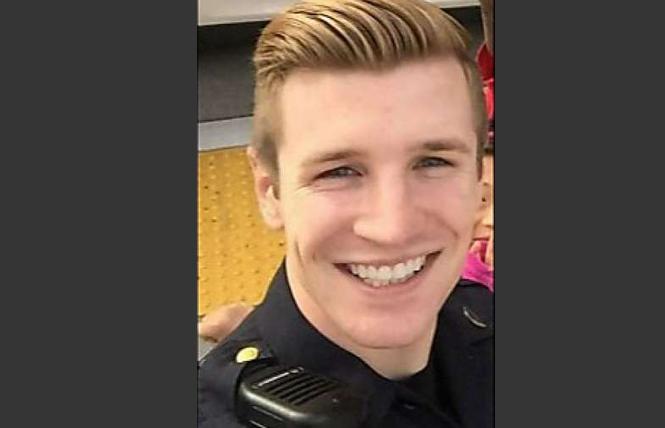 A gay cop in the San Francisco Police Department is suing the city for sexual harassment and discrimination because of his sexual orientation.

Brendan Mannix, 28, filed a lawsuit Thursday, August 16 in San Francisco Superior Court. He is still employed with the SFPD.

The suit alleges that two sergeants in Central Station, where Mannix was transferred in 2016, frequently made comments to Mannix relating to his sexual orientation. The suit claims the officers commonly called Mannix "such a queen," and "too dramatic."

When Mannix did something that the sergeants considered stereotypically gay the suit claims they said, "Ugh, you gays," or "God, you gays."

The sergeants also made comments regarding Mannix's appearance, the lawsuit states, including, "Wow, is that hair big enough?" and "That [hair] color is not natural." As well making comments about Mannix being too thin.

"These two sergeants are the ones who represent the old school mentality in the department," Lawrence Organ, Mannix's attorney, told the Bay Area Reporter in an interview. "We filed this to protect all officers and to move the SFPD into the 21st century to discourage from the old guard to get away with business as usual."

The lawsuit also claims that when Mannix addressed the sergeants in hopes of stopping the harassment, retaliation followed, including incidents where Mannix called for backup and backup came very delayed. In the moment where Mannix confronted the sergeants in a conference room, one of them got in Mannix's face and told him, "If you think I am a bully, file a f-ing complaint."

After months of harassment, Mannix decided to take a three-month leave, using his sick time, "to maintain his mental health," the suit said.

When Mannix returned from leave, he filed a complaint with the station in August 2017, the investigation of which, the suit claims, was not taken seriously and many of the incidents were omitted from the complaint by the sergeant who took it. The complaint was later closed.

Mannix also claims he was later given unfavorable assignments at the station.

"[Mannix] took action to make sure in the future if an officer complains they know the department will treat the complaint seriously and protect them against any retaliation," Organ said. "The police department failed to put an end to the harassment."

The SFPD did not respond to a request for comment.

John Cote, spokesman for the city attorney's office, told the B.A.R. in an email that the city has not yet been served with the lawsuit.

"The City of San Francisco, including the Police Department, has been a leader on LGBT rights for decades and remains committed to providing a safe and respectful work environment for all," he wrote in the email.

Mannix graduated from the police academy in 2015. He was initially assigned to the Richmond Station, but was later transferred to the Central Station in the fall of 2016.