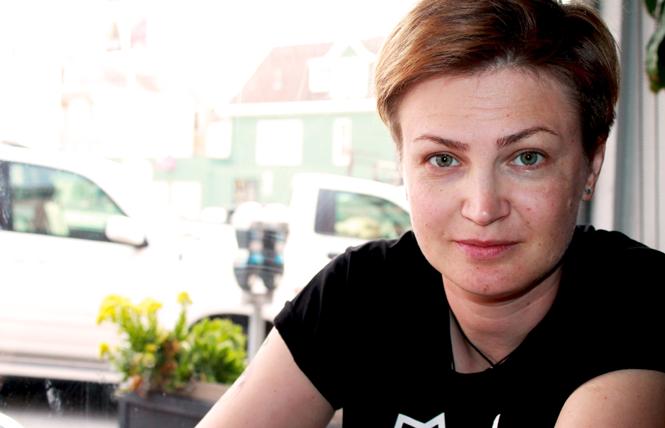 Olga Baranova, the former director and current program director, is running the Moscow Community Center from afar for her safety. Photo: Heather Cassell

It was a bold move. One that was dangerous in Russia, a country known for being one of the most homophobic in the world, and, eventually, led a woman to flee with her family to the United States.

However, Olga Baranova, a 40-year-old lesbian, knew it was necessary in order to continue operating Moscow's only LGBT community center.

The LGBT activist and former advertising executive, who was appointed director of the center, didn't see any other choice. About four months into working with a coalition of Russian LGBT organizations to create the Moscow Community Center in late 2015, many in the group walked away.

But the need was so great that Baranova's career was halted, and all her attention was focused on the center. There was one administrative staff member and one key volunteer, Tatiana Vinnichenko, who has been Baranova's right-hand woman from the center's launch.

"This kind of space was absolutely necessary in Moscow," Baranova, with the assistance of translator Anna Tchetchetkine, said in a recent interview in San Francisco. "It was necessary that somebody do this work, and it could not be abandoned. At the same time, it was difficult because they didn't have very many resources. I think that there were just enough resources to rent the space."

Yet, while they had the foundation, fundraising to maintain the center was another issue.

"In Russia, [it] is very difficult, in general, to ask people for donations," Baranova said. "People may be skeptical for this new project, but the need for the space was so high they fundraised money."

The center operates on a minimal budget, which is constantly in flux, to keep the doors open. Everything else is donated, she told the Bay Area Reporter.

Baranova shifted her role to program director, operating the center remotely since she left Moscow.

Baranova and Tchetchetkine met with the B.A.R. at a cafe to talk about the center, LGBT rights in Russia, Baranova's exile from her homeland, and her hopes for Russia and the center's future.

The center
In its short existence, the center has become a hub for Moscow's LGBT organizations and community.

The center hosts community events and programs produced by organizations and members of the community, according to Baranova.

"Virtually all of the LGBT organizations in Moscow have a presence in the center, in addition to visiting speakers from other places in Russia," said Baranova. "The center also runs its own events ... that will be interesting to the whole LGBT community."

Some events are cultural, such as a three-day art exhibit produced by the center. Some are educational, such as the speakers' series that welcomes LGBT activists and allies to present their ideas to the community.

During the center's first two years it welcomed up to 700 people monthly, quickly outgrowing its space. Since its move to a new location, the center has seen up to 800 people walk through its doors every month, and Baranova expects the number to keep growing, she said.

Police came to the center only once at its old location, Baranova said. One evening two or three police vans surrounded the building and riot police entered the center. They had been tipped off that there was a lecture about LGBT activism.

"They were afraid that some violent conflict might happen," she said. And it "most likely was a show of force that you should be afraid of us because that is how everything is done in Russia."

However, there were no legal issues, as "the center strictly follows the law," she said.

Some programs have been lifesaving, such as the charity auction that raised money to aid queer Chechens escaping persecution last year.

Other projects are confidential and are only worked on by Vinnichenko, who is currently the center's interim director on the ground, and Baranova. She declined to discuss the programs with the B.A.R.

Queer Chechen refugees
It was Baranova's work aiding persecuted LGBT Chechens that pushed her out of Russia.

In April 2017, it was reported by Novaya Gazeta that more than 100 male residents in the Chechen Republic had been abducted, held prisoner, and tortured because of their perceived or actual sexual orientation. The Chechen government has denied the gay purge.

"Chechnya made a lot of people more afraid, but also, more active," Baranova said. "When there's more oppression, people are also more active in resisting it."

The center worked with the Russian LGBT Network providing safe houses and financial support to 100 LGBT Chechens who came to Moscow. The number has risen to 120 as of May, despite a slowdown in request for help that started last November, she said.

Many of the 100 gay Chechens have resettled in LGBT-friendly countries, she said.

Baranova attributes some of the slowdown to Chechnya making it difficult for LGBT people to get out.

"It's harder for people to leave Chechnya," said Baranova. "Since the fall, the government has gotten clever. [Authorities] began to accuse people of crimes and sometimes forc[ed] confessions of other crimes. This prevents them from leaving Chechnya, and it makes it harder to help them."

Baranova confirmed that Chechen authorities have also targeted queer women. Network and center leaders made the decision to keep reports of women also being rounded up by Chechen authorities quiet to avoid "provoking the situation to get worse," she said, but they have changed their policy and are speaking out about Chechen lesbians' detainment.

"The problem also does exist for women and it has existed and it continues to exist," she said.

Forced to flee
Baranova said she had to leave Russia.

"There was no other choice, because it is not safe for me to be in Russia," she said, stating there were some events that happened and "several people warned her that people were looking for her."

She moved her wife and child to San Francisco in February. She declined to identify her wife and son to protect their privacy.

Baranova and her wife were married in San Francisco a few years ago, she said. The women have been together for 17 years.

The family applied for asylum after their visas expired, she said. They are currently waiting for a response about their immigration status.

It's been challenging being a Russian lesbian living in the U.S. with little English-language skills. She and her wife don't have the same type of employment opportunities that they had in Russia.

Baranova had worked at a Russian day care and her wife is learning English and was awarded a scholarship to take accounting classes, she said.

Baranova was out at the child care center.

"They were shocked. They looked at [me] kind of strangely and for a while were kind of confused," she said. The owners also asked her to cover up her tattoos. Over time, she watched her bosses and co-workers' attitudes change.

The future
Today, she remains focused on the center in Moscow and helping Russia's LGBT movement by increasing her fundraising skills, especially for a safe house for LGBT Russians.

She estimates that the safe house will run out of funding by November if it doesn't receive donations.

"In Russia, it's very difficult to fundraise for this kind of community center, but America is very good at fundraising," she said, talking about the experience and technology.

She's also focused on strengthening the relationship between the American and Russian LGBT communities.

"Right now, politically, the U.S. and Russia are growing far apart," she said. "It's very important for the LGBT community to remain ties between the two countries and to exchange knowledge and expertise."

It's a precarious time for all Russian activists in Russia.

"The government understands that if all of the opposition groups come together that it can be a real force and a real threat," said Baranova.

That isn't stopping small groups of Russian activists from building alliances with other opposition groups, including the LGBT movement, due to ongoing persecution by President Vladimir Putin's government.

"The trend is bad. It's not only just persecution of LGBT people. It's more of a general attitude of anyone who thinks differently," said Baranova.

LGBT activists and other opposition groups are starting to ban together as allies despite homophobia among some groups.

The groups also attend each other's demonstrations and events and LGBT activists protect other activists when they are arrested by going to jail with them, she told the B.A.R.

"They understand that they are in the same bind," she said.

She believes the combination is accelerating progress in Russia to a day when the former communist nation will be LGBT-friendly, and she will be able to return.

"No matter how much Putin tries, Russia can't actually stay isolated from the rest of the world," she said, pointing out that Russia's youth are watching the changes happening in other countries.

To donate, or for more information about the center, visit http://mcclgbt.com/en/mcc.