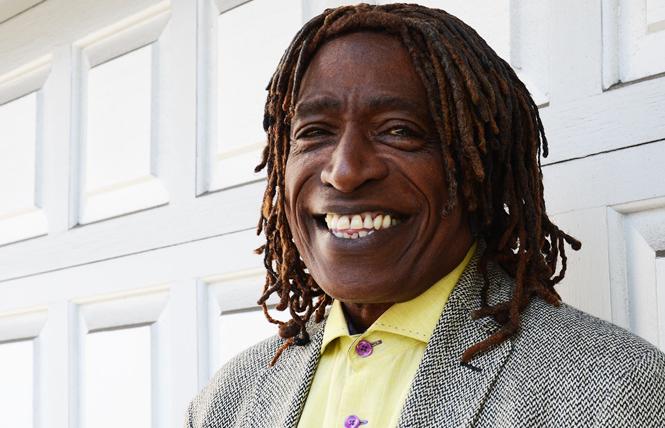 In the 2017 television miniseries "When We Rise," a docudrama that tells the story of the birth of San Francisco's gay rights movement during the 1970s and 1980s, actor Michael K. Williams, who portrayed gay activist Ken Jones, was featured in a courtroom scene, fighting to continue living in the home Jones had shared with his recently deceased partner. Marriage equality and domestic partnerships were still many years away. Same-sex couples had no legal rights at the time, and Jones lost his case.

In another memorable sequence in the show, Jones, who is African-American, turns to a group of straight black men who refuse to believe that homosexuality exists in their community.

"I stand before you a proud gay black man," Jones' character said.

The show brought new recognition to Jones and his activism, something friends were quick to praise. Though humble in his personal interactions with people, Jones is a man of great courage and accomplishment, his friends said, always willing to stand up for himself and his community.

"Ken is a trailblazer in his own right, as one of the first out gay black men who chaired the Pride parade," said longtime friend Cecilia Chung, a trans woman who was also featured in "When We Rise," and played by actress Ivory Aquino. "His stories really demonstrate the struggles of people of color and being LGBT, the stigma they have to overcome in order to survive one of the hardest times in queer history, from anti-LGBT violence and the HIV epidemic. Ken is one of the true heroes in the movement."

Gay activist Cleve Jones, whose memoir, "When We Rise," partially inspired the TV miniseries written by gay screenwriter Dustin Lance Black, has known Ken Jones for years. Part of the reason he wrote his book was to share the contributions of early Bay Area LGBT activists, including women and people of color.

"Ken is a dear friend and a true pioneer in our community, with a history of activism going back over four decades," Cleve Jones said. "He's smart and funny and dedicated, and I wish more people knew the remarkable story of his life. People talk a lot about intersectionality these days. Ken has always lived it."

Now 67, Ken Jones, who has seen his share of hard times, is at peace with his life. He recalled the pre-internet days of the gay rights movement, when activists campaigned for their causes on the streets of the Castro.

"Hibernia Beach was centered on the corner of Castro and 18th and extended from 19th to Market," he said. "There was no ocean within 14 miles of that beach, but we didn't let that interfere with our creativity as we hung out wearing our skimpy and sexy beach wear. On any given Saturday or Sunday you would encounter some six to eight ironing boards, staffed by scantily clad activists who were gathering signatures, registering voters, or hawking a cause."

At the time, most gay bars and organizations were operated by white men - people of color were often made to feel unwelcome. Jones was actively involved in combating these prejudices.

"We got off to a rocky start," Jones recalled, noting that some of the white men felt as though they owned the organizations they were part of.

"All of them were white," Jones wrote in an email. From the Jon Sims Marching and Twirling Corps to Shanti to San Francisco Pride to the political clubs. Local gay media wasn't much better, he pointed out.

"Bob Ross, may he rest in peace, and his newspaper were very, very slow to cover women's and people of color issues," Jones wrote, referring to the Bay Area Reporter's founding publisher who died in 2003.

Today, nonprofits like Shanti and the San Francisco LGBT Pride Celebration Committee have diverse leadership; a queer woman of color heads the Pride board, and a straight man of color is the executive director of Shanti.

As for the B.A.R., which started in 1971, it began covering racism in the Castro some time around the 1980s; back issues of the paper show stories about protests at bars in the gay neighborhood that would demand multiple forms of IDs from minorities. Late last year, Michael Yamashita, a gay man who has been the publisher of the B.A.R. since 2013, and was the paper's longtime general manager, purchased the paper after acquiring shares from two former investors. He became the first Asian-American publisher and owner of an LGBTQ newspaper.

"We decided that it had to begin and that two seats would be given up from the high-performing, and highly skilled, volunteers to women and people of color," Jones said of those early efforts to diversify organizations. "Some of the white men were infuriated by having to give up their treasured seats to absolute nobodys. Many of them spent hundreds of hours to make sure we failed at every opportunity."

Breaking down these barriers was only a small part of the activism in which Jones took part. He has served as a board member of Yes Inc., a federal demonstration project for salaried health outreach workers. Yes was the lead agency in creation of the Six-Agency Mid-City Consortium to combat AIDS. And for about a year and a half, he was co-house manager for LGBTQ kids who were aging out of foster care in Oakland.

"We wanted to give them stability, a sense of family, help them be successful in their next educational growth and/or working endeavors," Jones said. "We kept them off the street and from selling their bodies just to eat - we served three full meals every day."

Jones also served on the citizen review board for the BART Police Department beginning in 2009, when he was appointed by former BART Director James Fang. When current board member Nick Josefowitz won election a few years ago, Jones said that a straight white man replaced him.

Josefowitz told the B.A.R. that he decided to nominate someone else.

"Ken Jones served out his full term on the BART Citizen Review Board. All of us in the BART community are grateful for his service," Josefowitz wrote in an email. "BART ran an open and transparent process to appoint his successor, and I nominated a data-driven candidate with a proven track record of delivering on police reform and social justice."

Jones said that while on the panel, he helped recommend changes in police procedure.

"We reviewed and modified policy and procedure, as well as citizen review of complaints," Jones said. "I have spent a lot of time gathering an understanding of police culture, which is foreign from mine, and how to bring about change in the culture that everyone could buy into."

Through it all, Jones found his peace through spirituality, which came to him as he feared he would die of AIDS.

"One minute I was facing a terminal diagnosis and the next I accepted God as my Lord and Savior - 28 years later I am doing pretty well for a 67-year-old man living with AIDS for more than 30 years," he said. "I now believe that God created me just like I am, healed, perfect, and whole."

He pointed to a quote from Maya Angelou: "Pride is liking yourself, liking what you do, and liking how you do it."