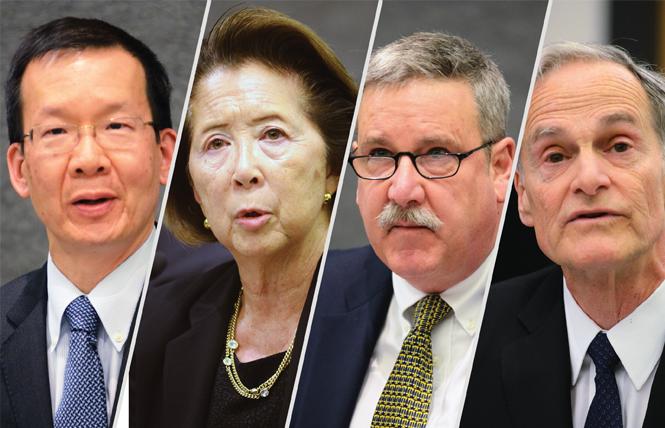 All results are based on unofficial returns Wednesday morning.

San Francisco
In San Francisco, the legal establishment was shocked earlier this year when four deputy public defenders announced they were challenging the four sitting judges because they had been appointed by Republican governors. But ultimately, that message did not gain traction with voters.

Cheng won against Deputy Public Defender Phoenix Streets, with 64.9 percent of the votes, the largest lead of the four races.

Lee reigned over Deputy Public Defender Kwixuan Maloof and attorney Elizabeth Zareh, who was also running for the seat, with 62.9 percent of the vote.

Karnow won with 55.2 percent of the vote over Deputy Public Defender Maria Evangelista, who would have been the first Mexican-American woman elected to the bench.

"The judges are feeling very positive tonight," said John Whitehurst, the political consultant for the incumbent judges' campaigns late Tuesday night. "The results are overwhelming. The people of San Francisco have showed their confidence in the fairness, independence, diversity, and quality of our Superior Court judges."

Incumbent judges in San Francisco - and most counties - usually do not draw challengers. This year was an exception in both San Francisco and Alameda County.

The campaigns of the four deputy public defenders were criticized by their opponents as being politically motivated. Gay state Senator Scott Wiener (D-San Francisco) early on supported the incumbents, while their colleagues on the bench offered broad support. The bench's lesbian and gay judges all supported the incumbents, as did many retired jurists, like Donna Hitchens, a founder of the National Center for Lesbian Rights.

In their campaigns, the challengers cited the need for a new perspective on the bench, the implicit bias of the incumbents, and that they were appointed by former GOP governors Arnold Schwarzenegger and Pete Wilson.

All the incumbent judges are registered Democrats.

At a post-election party held at Slate bar on 16th Street Tuesday night, the challengers were in high spirits as the first round of results came in.

Solis, who was at the party with her mom, said she was happy with the results.

"It's fantastic," Solis, who has been an attorney and public defender for more than 20 years, said. "21,000 people voted in favor of making change and holding the judges accountable."

She also expressed her frustration with the judges' and other opposing parties' opinion of the public defenders' campaign.

"The strong effort of the opposition to talk about us as the boogeyman and that we are attacking the judges is wrong," she said. "We are just people of color who are using our voice for change. That's not an attack, that's democracy."

Streets said regardless of who comes out on top in the race, it's a win-win.

"I feel good about the results," Streets said at the election celebration. "We got our message out there. For the first time, people are learning that they can vote for their judge and seeing the bias of the system."

Streets, who is black, also expressed his frustration for the disparate treatment of people of color in the judicial system of San Francisco.

Evangelista was optimistic about the results early in the night. She also talked about the unfair treatment of people of color and that the judges were not doing enough to combat the issue.

"I feel like the seats are empty," she said. "I don't feel like I am running against anyone. There is a systemic problem in the system. It's time for us to find solutions to the problem."

Maloof was not at the party when the Bay Area Reporter attended.

Zareh, an attorney who was not part of the public defenders' campaign, received 10.8 percent of the vote. She said she hopes the campaign sent a message to the incumbent judges about the need for change.

"I hope they learn a lesson," she told the B.A.R. Wednesday morning. "At some point they will have to face the voters and make change. I hope they can hear the initiatives I raised and pursue a filing system and raise the limits on small claims. The decisions they make affect people's everyday lives." 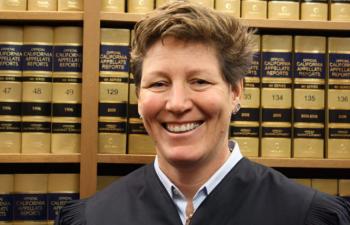 Alameda County
In the East Bay, Flanagan easily defeated Katz. According to unofficial returns, Flanagan received 64.37 percent of the vote, to Katz's 34.77 percent.

In a phone call with the B.A.R. Tuesday night, Flanagan said she was "feeling good" about the early returns, which showed her with a comfortable lead.

She added that she will continue to look for ways the judicial system can be "fairer, more just, and more equitable."

"In my courtroom, everyone is treated with respect," Flanagan said.