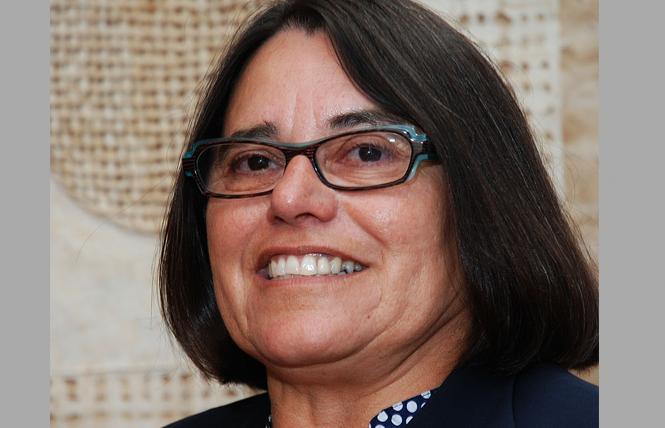 In advance of Hepatitis Testing Day Saturday, May 19, public health officials and advocates will hold a rally Friday to raise awareness about hepatitis B and C and encourage people to get tested.

"You can save your life with a free hep C fingerstick test, with results in 20 minutes, leading to linkage to care and a cure if you're positive," Robin Roth, co-chair of the San Francisco Hepatitis C Task Force told the Bay Area Reporter.

Over years or decades, hepatitis B and C can cause serious liver disease, including cirrhosis, liver cancer, and the need for a liver transplant. But they often have no symptoms at early stages, and many people are not aware that they're infected.

"Too many people living with hepatitis C have no idea, as this chronic infection can cause no symptoms for years, while silently causing damage to the liver and the rest of the body," according to Dr. Annie Luetkemeyer, director of the Hepatitis Co-infection Clinic at Zuckerberg San Francisco General Hospital. "The great news is that HCV can be cured in as a little as eight weeks with well-tolerated treatment that is highly effective in nearly all patients."

The rally, sponsored by the Hepatitis C Task Force, Hep B Free, and End Hep C SF, will offer free hepatitis B and hepatitis C virus (HBV and HCV) testing. A new UCSF mobile van will provide FibroScans, a test used to determine the level of fibrosis, or scarring of the liver that can lead to cirrhosis.

"We encourage everyone highly impacted by hepatitis C, including people who use drugs, baby boomers, men who have sex with men, and trans women, to talk to their health care providers about getting tested," Garcia told the B.A.R. "We know we can eliminate hepatitis C in San Francisco, and testing and treatment are crucial components of the plan."

HBV and HCV are transmitted primarily through blood. Both can be spread via shared drug injection equipment or unsafe medical procedures. HBV is more easily transmitted by sex and from mother to baby than HCV; HCV sexual transmission occurs mainly among HIV-positive gay men. Hepatitis B prevalence is highest among Asian-Americans. Baby boomers - many of whom have no known risk factors - have the highest rate of HCV, but new cases are rising among younger people who inject drugs.

According to recently published estimates from End Hep C SF, nearly 21,800 San Francisco residents - or 2.5 percent of the city's population - are HCV antibody positive, meaning they've been exposed to the virus. Of these, around 16,400 are thought to have active infection, and within this group up to 12,300 are untreated and at risk of transmitting HCV. People who inject drugs account for about two-thirds of active infections.

"Hep C causes more deaths than over 60 other reportable infectious diseases, and it is the leading cause of death for HIV and HCV co-infected people," said Roth, a member of the faculty of the new HIV and hepatitis navigation specialist certificate program at City College of San Francisco. "If you don't get tested, you can't get cured."

Hepatitis B can be prevented with a vaccine, which is now routinely given to infants and recommended for anyone at risk, including men who have sex with men and people with multiple sex partners. The disease can be treated with antivirals, but it is rarely cured. There is no vaccine for hepatitis C, but new direct-acting antiviral medications can cure almost everyone in two or three months.

But in order to be treated or cured, people first have to find out whether they have one - or both - of these viruses, advocates said.

"So many people don't know they have hep C. It's the deadliest communicable disease, but it kills slowly," said Pauli Gray, a community advocate award recipient and hepatitis C wellness coordinator at the San Francisco AIDS Foundation. "Support us as we fight hep C and the stigma that feeds it."

The National Hepatitis Testing Day Rally takes place May 18, from noon to 1 p.m., on the steps of San Francisco City Hall, 1 Dr. Carlton B. Goodlett Place.