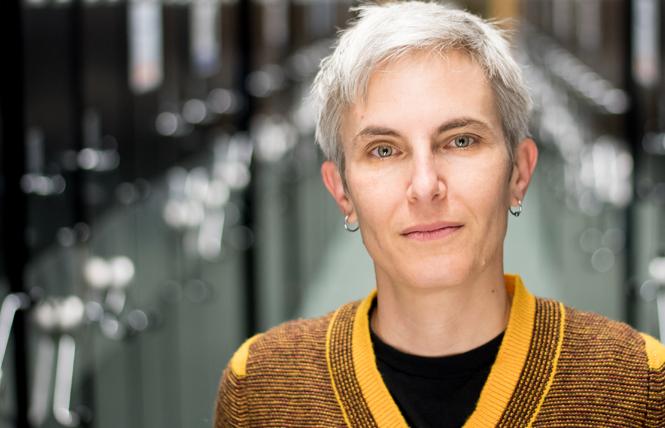 Wendy Kramer knows the San Francisco Public Library like the back of her hand from years of experience, and now, she's back, this time as the new program manager for the James C. Hormel LGBTQIA Center.

When the former Hormel director Karen Sundheim retired after a decade in March 2017, Kramer, a lesbian, took over in September. She brings with her a deep love for the public library and a vision to increase outreach and encourage people on all ends of the LGBT spectrum to experience the Hormel Center, one of the country's premiere archives for the LGBTQ community.

"I really want to reach out to people who haven't seen themselves in the library, trans young people, people of color, and really young people who may not know the center even exists," she told the Bay Area Reporter in a recent interview.

In her first eight months, Kramer, 49, has had a lot on her plate. She is working on reinvigorating the Radar Reading Series to more deeply connect the speakers to the archives of the center.

The series, now called "Show Us Your Spine," invites a handful of writers to explore the archives of the center for a month at a time and then read from work that inspires them at a public event.

"I wanted to get readers more deeply involved in the archives," Kramer said. "It has had tremendous impact. It's emotional to watch people interact with the material and then share that with others."

Another program Kramer is working on is Sprightly, which began shortly after her start date. Kramer, who worked for two years in teen services at the Bayview Linda Brooks-Burton Branch Library, hopes to bring a renewed focus on engaging youth, something Sundheim said she hoped her successor would do.

The Sprightly program is a two-hour event that happens every Sunday from 12:30 to 2:30 p.m. Transitional age youth, 18-25, are encouraged to come to the center's reading room on the third floor of the main library for coffee, doughnuts, and a queer craft.

"These are usually people who don't have anywhere to live or need access to resources and a lot of the time they are LGBTQ folks," Kramer said. "I have seen some very interesting intergenerational conversation going on and people pulling books off shelves."

Kramer said she wants youth and anyone who comes to the center to feel "at home."

For the first time, shortly after she started, the center began a fellowship program through the Friends of the San Francisco Public Library, a nonprofit that funds the center through an endowment.

Kramer is managing Hormel fellow Mason Smith, who she said is focusing on outreach and social media.

Tom Fortin, chief of the main library, said Kramer is doing an excellent job at managing the fellow and gives the center new energy.

"We are ecstatic to have Dee Dee and she's done a great job already in the position," Fortin said in a phone interview with the B.A.R.

He said what stood out about Kramer during her interviews for the job was her emphasis on including and engaging the queer community; when the Hormel Center first opened in 1996, its main focus was lesbians and gays. A few years ago it changed its name to include LGBTQIA to better reflect the community.

"Dee Dee really brings that attention to the queer community," Fortin said. "As the community has evolved and the conversation has evolved, the center is evolving and looking at serving the entire queer community and Dee Dee brings great energy and positivity to that work."

Another aspect that Fortin really liked about Kramer was her vast experience in public libraries and archives services. Kramer first joined the San Francisco Public Library in 2005 as a part-time adult services librarian, then went on to teen services in the Bayview before spending seven years at the San Francisco History Center. She left briefly for a position with UCSF in the industry documents library before becoming the program manager for the Hormel Center.

What Kramer said she has enjoyed about her job so far are the people and the meaningful connections she is making with the employees, readers, and the material itself. The center houses more than 13,000 books and nearly 5,000 films, a portion of which Kramer is working to digitize, another project on her plate.

With San Francisco Pride just around the corner, Kramer is also gearing up for the event. The center will have a book mobile, hats with books on them, and a special handout that Kramer would not reveal.

"It's been hectic, it's been interesting, it's been exciting," she said of her first few months.

Although a lot of work, Kramer said she is honored and humbled to be the new program manager.

"As a lesbian, it's something very close to me," she said. "I have so much love for the library and for the people."

The Hormel Center is one of the country's premier archives for the LGBT community and the first permanent gay and lesbian center in any municipal building in America. It was founded in 1996 and named after James C. Hormel, the country's first openly gay ambassador, who donated $500,000 to help launch the collection. The center's holdings span the history and culture of the LGBTQ community, with a special focus on northern California.