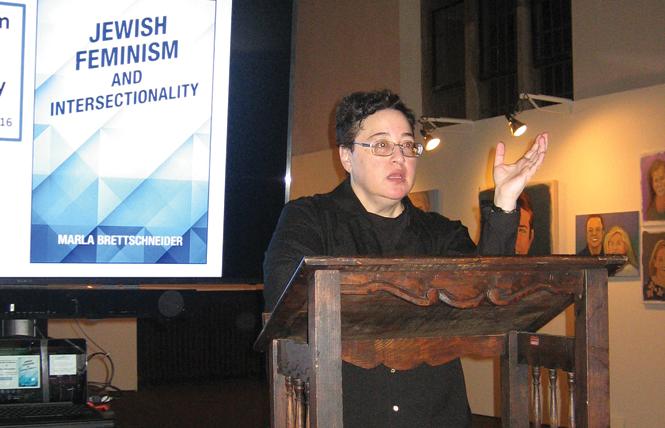 The term "intersectionality" has become the latest buzzword, especially to describe the myriad forces opposed to President Donald Trump and his administration's policies.

One scholar who seeks to define intersectionality is Marla Brettschneider, Ph.D. She is a professor of political philosophy with a joint appointment in political science and women's studies at the University of New Hampshire.

Queer and Jewish, Brettschneider is an expert on diversity politics. Her books include "Jewish Feminism and Intersectionality," which was also the title of her March 27 lecture at the Center for LGBTQ and Gender Studies in Religion's Jewish Queeries series in Berkeley. Brettschneider, 54, also spoke with the Bay Area Reporter.

In her lecture, Brettschneider defined intersectionality, a term first coined by legal scholar Kimberle Crenshaw, as looking critically at multiple aspects of identity, oppression, and justice politics together. For example, one views racism, patriarchy, classism, and anti-Semitism, simultaneously, rather than as either/or or single entities.

Crenshaw developed her theory discussing black feminism, realizing that being black and a woman were not independent social stratifications but interactive ones, as they reinforce each other. So it's not just race, or just class, or just gender, or just sexuality but all of them at the same time. Their combined weight is far greater than the sum of their individual parts and they have their most deleterious impact on marginalized people in society.

Brettschneider noted how this paradigm has long been in use under different terms such as multiculturalism, and identity politics by feminists and others on the left, but more systematized under Crenshaw's depiction. Jews have been very active in using these models, both in the academy and in activism, yet Brettschneider observed how there is almost no scholarship that takes Jewish experience and matters of concern seriously in intersectionality work.

"Since my book went to press, lack of attention to Jews in intersectionality work has become increasingly joined with anti-Israel/anti-Zionist ideas and actions, as well as a persistent anti-Semitism," she said. "This exclusion has worked against intersectionality because Jews' experience as a minority, marginalized, and usually diasporic peoples has much to offer. This experience, wisdoms, and organizing strategies (for good and for ill) can be of much use for many other groups in their own specificities and also in solidarity.

"However, much more insightful and careful analysis is needed that questions privilege and Christian hegemony, to understand a variety of ways that politics and power dynamics operated. It is also potentially deadly, not only for Jews, but for all of us, to leave Jews out of analyses of white Christian supremacy," Brettschneider added. "Yes, because of Trumpian policies, more people are talking about white supremacy, but they are not often understanding that white supremacy has always actually operated as white Christian supremacy."

Brettschneider was adamant that "when you work on issues of identity, oppression, and justice politics and leave out any matters of gender and sexuality, anything about LGBTQ people, perspectives, and issues, you will not only get a partial picture but what you do get will be skewed, given any exclusions of this sort. And you will likely be engaged in reproducing modes of cisgender heteronormativity even if that is not your intention."

Each identity one is exploring can situate differently power-wise, she noted. For example, a gay black man operates at different political positions, so gay and black might be disadvantages, but man is not. Still, each identity makes the other possible as they co-create each other.

She applies the same criteria to the #MeToo movement, as "we need to work on multiple levels with multiple axis of identities, impressions, in a multi-community and multi-issue justice movement.

"We have a lot of experience back from the 1980s in the feminist movement working between seeing the truth and individual testimony with complex ways in which we understand and challenge truth such that it's not as simple as experience equals truth, which is a presumption sometimes of critics who then seek to challenge the validity of individual testimony," she said.

Jews have long recognized that social justice is one of the main concerns that make them Jewish, so they can provide acute analyses of power and oppression, having been repeatedly dismantled throughout their long history, she noted.

One audience member brought up the issue of the Parkland, Florida school shooting and revitalization of the gun control debate, especially the recent March for Our Lives.

Brettschneider reminded the audience that the slogans used at the march, such as "Never Again" or "We Will Remember," were first used as awareness for Holocaust victims and survivors. Also, seven of the 17 shooting victims were Jewish, and she said that there is evidence that shooter Nicholas Cruz may have been hunting for Jews, a fact not well-known, but a significant one in any intersectional analysis of this tragedy. So, she explained, with its wealth of historical examples, its organizational experience, and political public response, Jews have much to offer in how to deal with this catastrophe.

Another audience member remarked how the needs of a black child are often set against those of a white child, seen as a competition, that meeting the black child's needs somehow takes away from those of a white child, with such hierarchies of oppression being used to delegitimize marginalized people by giving into an irrational fear that there is not enough room or resources for all of us.

But Brettschneider argued that people can be expansive for everyone if they are willing to see the world through multiple lenses through various communities, "supporting and challenging one another with humility and in solidarity," she said. "Joining our collective wisdom and experiences will be crucial in building an effective resistance movement against Trump and his policies."