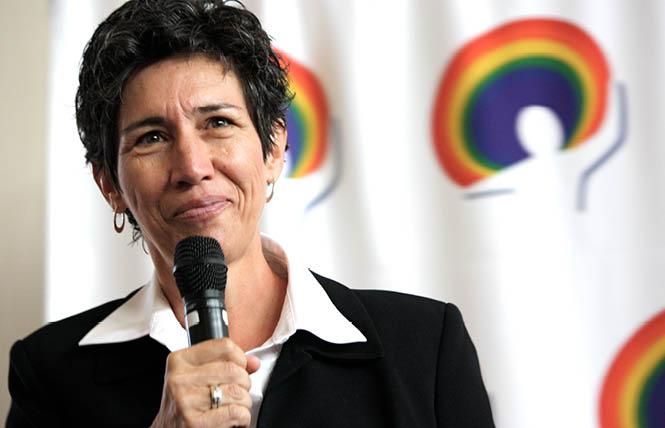 Republican San Joaquin County Supervisor Tom Patti is defending his use of the term "traditional values" to smear lesbian Assemblywoman Susan Talamantes Eggman (D-Stockton) in an email supporting her Democratic opponent in the June primary election.

Eggman, a former Stockton city councilwoman, is seeking re-election this year to her 13th Assembly District seat in the Central Valley. She was first elected in 2012 and has held various leadership roles in the Legislature, most recently becoming acting chair of the Legislative Women's Caucus.

In the June 5 primary she is facing a challenge from fellow Democrat Carlos Villapudua, a former county supervisor, and Republican auto mechanic Antonio M. Garcia. Villapudua had reportedly told Eggman he would wait until she vacated her Assembly seat to run but then jumped into this year's race.

Monday, April 2, Patti sent out an email in support of Villapudua's candidacy and several times bashed Eggman for not representing "traditional values." He also complained that Eggman was part of the Assembly leadership leading California to a "fiscal disaster along with a progressive agenda that is forcing social changes and programs that are out of touch with our community."

Patti added that the June election provides voters "an opportunity to promote traditional leadership and values that are pro business and responsible government" by supporting Villapudua. His email ended with a request that those receiving it forward it on to others so they would also "support the candidate we need to bring back traditional values and leadership that will make a difference."

Opponents of LGBT rights have long used the term "traditional values" in attacking the LGBT community. And many who saw Patti's email read his use of the term as a homophobic attack against Eggman, even though he never once mentioned her by name.

Samuel Garrett-Pate, communications director of the statewide LGBT advocacy organization Equality California, denounced Patti's use of the "hateful rhetoric" in a statement to the Bay Area Reporter. EQCA has endorsed Eggman's re-election bid.

"Across our state, Californians are looking for leaders who will unite our communities. They're looking for champions like Assemblywoman Susan Talamantes Eggman, who has spent her career fighting for bold solutions to the tough issues facing Stockton. And they frankly have no time for divisive, hateful rhetoric like the words used by her opponent's supporter," stated Garrett-Pate.

Attorney Al Ellis told a columnist for the local newspaper, the Stockton Record, that he and his wife were surprised to learn Patti had included their names on the host committee for the fundraiser for Villapudua, as they are backing Eggman. He told the paper he repudiated the "traditional values" rhetoric Patti had used.

Neither Patti nor Villapudua responded to the B.A.R.'s requests for comment by deadline Friday.

Eggman, who is married with children, told the B.A.R. that she is used to being attacked in such a manner, as she encountered similar anti-gay messaging during her past campaigns for city council.

"He can say whatever he wants. I think anybody who has been around a little bit of time knows the term 'traditional values' is what people use to separate us from them," said Eggman.

Villapudua told a reporter with the Record that Patti's use of the term had nothing to do with either candidate's sexual orientation. It merely referred to him being "a family man" who tries to be a role model in public by saying "excuse me" or washing his hands before he eats.

All last week Patti attacked the Record on his Facebook page for spreading what he claimed was "Fake News," using a line long favored by President Donald Trump. His diatribes began even before the paper published its first story last Thursday.

"FAKE NEWS ALERT!!! Tuesday the Stockton Record contacted me that the Bay Area Progressive Susan Eggman is claiming I'm attacking her lifestyle in a "coded threat" (WHAT??) when I describe Carlos Villapudua as a traditional value leader IN A PRIVATE EMAIL sent to supporters!" wrote Patti, despite the fact he had instructed people to pass along his email to others.

He tried to explain away his use of "traditional values" as having nothing to do with Eggman's sexual orientation. But in doing so Patti used another coded term, "lifestyle," that anti-gay groups have long used to claim that being LGBT is a choice.

"It's not her lifestyle that matters to me at all, it's her failed leadership as a progressive Sacramento politician, that's why I am inviting people to support Carlos Villapudua in his race for State Assembly because he has traditional leadership values that will build a stronger California while working across party lines!" wrote Patti.

Among his gripes with Eggman, wrote Patti, is her support for the state's high-speed rail project, which he called "the train to nowhere," and her authoring a bill that would allow cities to open safe injection sites for intravenous drug users. The legislation is currently stalled in the state Senate.

When asked by a reporter from the Record what he meant by "forcing social changes," Patti cited as one example Eggman's backing of a state bill that required single-stall bathrooms in businesses and government buildings to be labeled as gender neutral. Its aim was to benefit transgender people who are often harassed when using public restrooms.

In one Facebook post, Patti tried to deflect blame for his word choice in the email by claiming the attacks against him were rooted in political sour grapes.

"Sorry Susan Eggman you're not the victim you are the representative of failed Bay area politics and you happen to be bitter towards me since I beat the person in my Supervisor race that you were supporting and recommended to the Governor!" wrote Patti, who in 2016 defeated Moses Zapien, who had been appointed to the county board by Governor Jerry Brown to fill a vacancy.

"There are a lot of stupid people in politics. I meet people from all sides of the political spectrum who are not so bright," said Clark, who is also involved with the LGBT Log Cabin Republicans group. "This is probably coded language, but it is out in San Joaquin County and I don't know the people involved at all."

Nonetheless, Clark said he found it odd to learn a Republican was backing a Democrat in the race.

"It disappoints me, as a Republican, he is getting into a Democratic internecine war when he should probably just stick to Republican politics," said Clark.

Eggman had been expected to easily win re-election this year, positioning herself to run for state Senate. Lesbian state Senator Cathleen Galgiani (D-Stockton) will either term out of her seat in 2020 or resign later this year if she wins election to the state Board of Equalization.

Yet Eggman may be in for a protracted campaign fight if Villapudua survives the June election, where the top two vote-getters will advance to the November election regardless of party affiliation.

"I take everything seriously, very seriously," Eggman told the B.A.R. when asked about having an opponent from her own party this year.