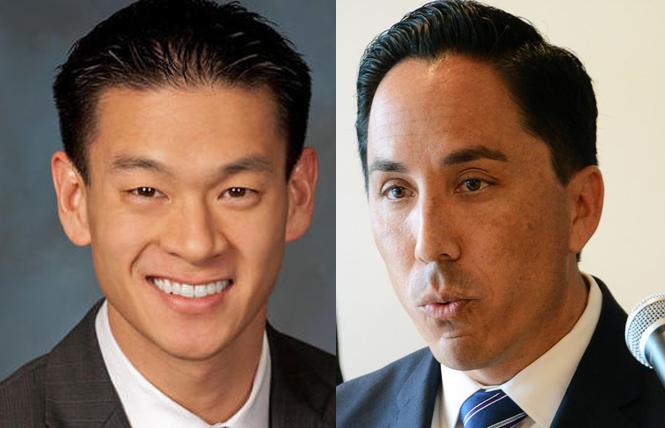 The needs of youth and health issues within the LGBT community are the main focus of a bill package California lawmakers and advocacy groups are pushing during the 2018 legislative session.

The legislation runs the gamut from providing services to homeless LGBT youth to addressing the needs of LGBT seniors. Also before state lawmakers are proposals to further crack down on practitioners who claim they can turn LGBT individuals straight and to issue an apology from lawmakers to the state's LGBT community for past policies and laws that discriminated against LGBT individuals.

"Basically, what we are trying to do is continue our focus on addressing the disparities in health and well-being that LGBTQ people face," said Rick Zbur, executive director of Equality California, the statewide LGBT advocacy organization that is co-sponsoring the legislation. "The bills are supposed to focus on the most vulnerable parts of our community."

The lead author of two of the more influential proposals this year is gay Assemblyman Evan Low (D-Campbell), who chairs the Legislative LGBT Caucus. His Assembly Bill 2943 would designate "conversion therapy" as consumer fraud in the Golden State. If the bill is adopted, then licensed professionals found to be offering what mainstream medical groups decry as junk science could be stripped of their license to practice in California.

In 2012 state leaders enacted legislation that banned mental health professionals from trying to alter the sexual orientation of LGBT youth 18 years and younger. Low's bill would effectively expand the ban to include adults.

"Legally, the implication could be the outright prohibition of conversion therapy as a whole. That is my hope," said Low in a phone interview with the Bay Area Reporter.

He said the legislation would apply not only to psychologists and psychiatrists but also to any medical providers who are licensed under the state's Department of Consumer Affairs.

"Study after study has shown that conversion therapy is ineffective, damaging, and counterproductive," stated Low in a news release announcing the bill. "It is our duty to protect Californians from such deceptive practices that will expose them to physical and emotional harm."

Zbur told the B.A.R. that despite the earlier legislation, which survived court challenges, there are adults in California being offered conversion therapy.

"It is harder to tackle this when talking about adults who have free will and free choice. But many of these people really are subject to what we know is a practice that is fraudulent," he said. "This is another way of extending the protections that were put in place for youth to adults."

Low is also the lead author of Assembly Concurrent Resolution 172 that would offer an official apology for the state's past discriminatory laws that oppressed and persecuted the LGBT community. The state's mistreatment of its LGBT residents dates back centuries.

Low's office has pointed to indecency statutes that allowed the police to harass and sometimes arrest people who were considered deviant or gender-bending. Also cited is a 1909 law that called for sterilizing those convicted and imprisoned for committing sodomy and oral sex acts.

The apology would also cover more recent steps taken by California, both legislatively and at the ballot box, to restrict same-sex couples from being legally wed. It is similar to the apology the Legislature issued to the Chinese community for past laws and actions taken by the state that discriminated against it.

"This formalized statement is validation for our community," said Low. "We recognize the painful hardship suffered by the LGBT community throughout our state's history. The resolution also reaffirms our promise for preserving the rights of all people and commits us to being a fully inclusive state."

The main objective of the resolution is to ensure that California does not repeat the anti-LGBT steps it has taken in the past, Low said. But it is also aimed at giving a boost to the call for more funding of services focused on LGBT individuals, he acknowledged.

"If you agree there has been a history of discrimination toward the LGBT community then what do we do today to adequately fund programs for HIV and AIDS or housing for homeless LGBT youth and many other issues?" asked Low.

Gay state Senator Scott Wiener (D-San Francisco) has authored Senate Concurrent Resolution 110 that calls on medical professionals to postpone performing sex assignment/genital "normalization" surgery on infants and instead wait until the individuals are old enough to give their consent to the procedures. He and advocates are expected to hold an informational hearing about the issue Friday, March 2, to educate lawmakers and the public about why such surgeries on infants are unnecessary.

According to the resolution, "there is evidence that these surgeries cause severe psychological and physiological harm when performed without the informed consent of the individual."
The resolution would be nonbinding, thus legislation banning such practices could be introduced in the future, said Zbur.

"The resolution is intended to start educating the Legislature and the LGBTQ community and the broader community on intersex issues," he said. "It may result in future years us looking at legislative fixes that may need to take place."

"We know that transgender and gender-nonconforming youth are at much higher risk for developing serious negative health conditions. This is especially true for those youth in our foster care system," stated Gloria. "AB 2119 affirms the right of foster youth to be able to access health services reflective of their gender identity - meaning, these children can grow up safe and healthy, and be exactly who they are meant to be."

A number of advocacy groups are co-sponsoring the bill, including EQCA, the Los Angeles LGBT Center, Lambda Legal Defense and Education Fund, American Civil Liberties Union of California, and the National Center for Lesbian Rights. It would define "gender-affirming health care and behavioral health services" as "health care or behavioral health services that respect the gender identity of the patient as experienced and defined by the patient." Included would be procedures that align a person's gender presentation with their gender identity.

"This bill addresses a critical public health crisis in California: lack of access to medically necessary primary care for transgender and gender-nonconforming youth in foster care," stated Dr. Johanna Olson Kennedy, medical director of the Center for Transyouth Health and Development at Children's Hospital Los Angeles. "These youth need and deserve the same access to health care guaranteed to all youth in out-of-home care, and this legislation will promote the health and well-being of some of the state's most vulnerable young people."

Zbur told the B.A.R. that the legislation, the first-of-its-kind in the country, should have minimal costs to the agencies but reap great benefits for the youth.

"Most of these youth are covered by Medi-Cal already or take part in other health insurance programs," he said. "Most studies show that providing necessary medical care for transgender people adds minimal costs to the health care system."

AB 2153 by Assemblyman Tony Thurmond (D-Richmond) would require school districts to provide teachers and school staff cultural competency training to ensure they are meeting the needs of LGBTQ students. Similar legislation in the past has been watered down or shelved due to the costs involved in offering the training.

But Zbur argued that the investment would result in various dividends.

"We would argue that while, yes, there is a cost to this bill, it is good public policy and a good investment because it results in hundreds of thousands of kids' lives improving," he said, noting that they are more likely "to stay in school and go to college or get a job after they graduate."

And as the B.A.R. has previously reported, Senate Bill 918 co-authored by Wiener and Assemblywoman Blanca Rubio (D-Baldwin Park) would establish $60 million in grants for housing, services and supports for youth experiencing homelessness and require the programs be inclusive of LGBTQ youth. It also would create the Office of Homeless Youth within the California Department of Housing and Community Development.

LGBTQ older adults would be deemed "a population in need of special attention" under AB 2719 authored by Assemblywoman Jacqui Irwin (D-Thousand Oaks). It would open the door to more state funding for LGBT senior services.

Local law enforcement agencies would be required to update and strengthen their policies on hate crimes under AB 1985 by Assemblyman Phil Ting (D-San Francisco). Similar legislation was pulled last year due to concerns about the costs police departments would incur in implementing it.

"The costs probably will come back as an issue," Zbur predicted. "But as we indicated in our 2017 Legislative Scorecard, there is no good reason for the bill to be held."

The last of the bills introduced to date is AB 2663 by Assemblywoman Laura Friedman (D-Glendale). It would provide retroactive relief to individuals who were registered as domestic partners in municipal jurisdictions and may have had their property taxes increased due to the death of a partner. The goal is to ensure the surviving partner does not lose their home.