Teen seeks to end bullying he once experienced 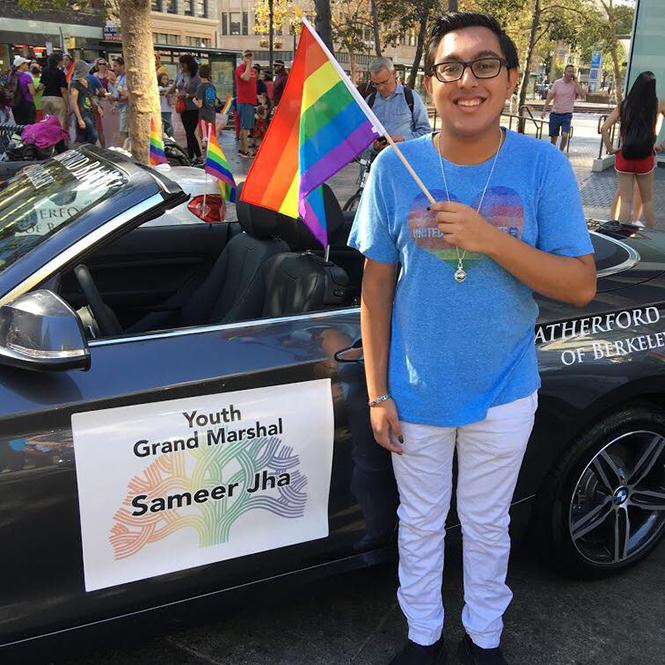 Throughout elementary and middle school, Sameer Jha faced severe bullying for being an effeminate child. Dirt was thrown on him by his male peers as they called him "gay" and "disgusting." He had a jar of tarantulas thrown at him in his seventh-grade biology class.

Jha is now 16 years old, identifies as a gender flux queer, and is dedicated to making sure no other LGBTQ youth experiences the harassment he did. Through GoFundMe, Jha is asking for $8,000 to publish an educator's guide to help create safer schools for queer youth. To date, he has raised almost $1,400.

"My ultimate goal is to make sure students don't have the same experiences as I did," he said. "I want straight and cisgender youth to be equipped with the knowledge that when they meet queer people or discuss queer people they can handle the situation carefully and have it lead to a positive outcome."

After joining the Gender and Sexualities Alliance club at the College Preparatory School, his current high school in Oakland, Jha came out at 14. Since then, Jha has looked back retrospectively at his bullying experiences and said he realized the root of it came from the ignorance and lack of awareness that his educators, peers, and their families had about the LGBTQ community.

From this, Jha has spent the last two years researching and writing a book that aims to end bullying and increase awareness of the LGBTQ youth community and its needs through educating middle and high school teachers.

The book is just one of Jha's accomplishments in advocacy for his community. Jha is the founder of the Empathy Alliance, a nonprofit organization that consults educators and students on how to create a more welcoming school environment for LGBTQ youth. The organization holds workshops, assemblies, and panels across the United States.

"I want to help queer students and queer youth have a safe place to learn, discuss, share ideas and talk about queer identities," he said.

One of the first things he did as founder was return to the middle school in Fremont, California, where he faced some of his most challenging times. The school now has its first gay-straight alliance, thanks to Jha, the opening meeting of which welcomed close to 60 students and teachers, filling the room to capacity.

Just recently, Jha was named youth ambassador for the Human Rights Campaign, America's largest LGBT civil rights organization, and traveled last weekend to Orlando for its Time to Thrive conference. In the past year, he has spoken at rallies, served on panels, led workshops, and facilitated classes reaching hundreds of educators and students from schools around the country on topics including trans rights, gender and sexuality, breaking down misconceptions, and intersectionality.

Two people Jha worked with talked about his passion for advocacy, work ethic, and his potential to become a leader in the LGBTQ community. One of those people is Oakland Mayor Libby Schaaf. Jha worked as an intern in the mayor's office to help engage Oakland's LGBTQ community around Oakland Pride. He was the youth grand marshal in last year's Pride parade.

"I consider Sameer an integral youth leader in the Oakland LGBT community," Schaaf wrote in an email. "We need more people like him to step up and make a difference in our world."

Another person Jha worked closely with is Dr. Ron Holt, a psychiatrist, motivational speaker, and author of the best-selling book, "PRIDE: You Can't Heal if You're Hiding From Yourself." Holt has consulted Jha about his educator's guide and sat on various panels with him, including the Time to Thrive conference.

"Sameer has been able to take his past adversity of being bullied and turn his story into an asset for current students to learn and grow from," Holt wrote in an email. "It has been an honor to be one of his mentors watching him grow and change his community one person at a time."

Although he hasn't even graduated from high school, Jha has made a significant impact in the LGBTQ community. As a first-generation American, with parents who immigrated from India and Pakistan, Jha has a particular interest in intersectionality. He is not sure where he will attend college, but plans to earn his Ph.D., possibly in gender studies, and become a professor.