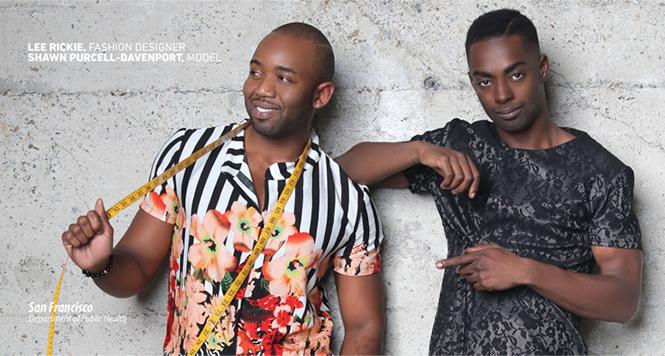 An image from the San Francisco Department of Public Health's campaign to increase PrEP use among African-Americans  (Source:Courtesy SFDPH)

The San Francisco Department of Public Health has launched a new campaign to increase PrEP use among African-Americans, in an effort to help end disparities in new HIV infections, especially among black gay and bi men.

The initiative aims to help African-Americans learn about PrEP and engage in discussions with their health care providers about HIV prevention, as part of a larger conversation about sexual and overall health.

"Some people have trouble finding a provider willing to talk openly and honestly about sex, HIV, and PrEP," said Dr. Hyman Scott, a physician at Zuckerberg San Francisco General Hospital's Ward 86. "Stigma is still an important barrier to seeking sexual health services for many men. We want people to be able to talk with their providers about all aspects of their health, including their sexual health, and how PrEP can be part of the conversation."

Nationwide, African-Americans accounted for 44 percent of new HIV diagnoses in 2016, though they make up about 12 percent of the U.S. population, according to the Centers for Disease Control and Prevention. New HIV infections among gay and bisexual men overall finally started to decline between 2010 and 2014, but rates were stable, rather than falling, among African-American gay men, and rose by 30 percent among black gay men in the 25-to-34 age group.

San Francisco's latest HIV epidemiology report shows that HIV incidence declined for all racial and ethnic groups - down to an all-time low of 223 new diagnoses in 2016. But African-Americans account for 15 percent of new HIV cases while making up only about 6 percent of the population.

"African-American men have the highest HIV diagnosis rate among all groups in San Francisco," Health Director Barbara Garcia, a lesbian, said in a DPH press statement. "While the rate is declining, we need to do a better job of reaching the African-American community with tailored prevention messages and information. PrEP is a medication that prevents HIV and saves lives."

Clinical trials have shown that when taken consistently, Gilead Sciences' Truvada (tenofovir DF plus emtricitabine) reduces the risk of HIV infection for men who have sex with men by around 90 percent, with rates approaching zero for people who take it at least four times a week. Several study cohorts and large clinical practices have seen no new infections among regular PrEP users.

The U.S. Food and Drug Administration approved Truvada for HIV prevention in July 2012 (it was previously approved for HIV treatment). Adoption was initially slow, but by late 2013 PrEP use started to rise steeply as gay and bi men began promoting it within their communities.

Exact numbers and demographics of people using PrEP are difficult to come by because this information is not centrally collected. Based on an ongoing pharmacy survey, Gilead researchers estimated that around 120,000 people in the United States were taking PrEP by the first quarter of 2017. Experts and advocates generally think this estimate is too low and agree that a majority of PrEP users are white gay and bi men.

A recent report from the California HIV/AIDS Policy Research Centers found that PrEP use increased dramatically among people enrolled in Medi-Cal after California implemented Medicaid expansion in 2014. San Francisco saw the largest rise - more than 30-fold - but numbers also rose in smaller cities and rural areas. While all groups have seen increases, PrEP use remains substantially lower among black, Latino, and Asian Medi-Cal enrollees, as well as among women and people under 25.

The new PrEP Supports campaign highlights real people, features many aspects of life that are worth protecting, and is broader than previous efforts that focused only on sex, according to DPH. The change is based on research by an Oakland-based brand-development firm that conducted listening exercises in the African-American community.

Tony Bradford, associate director of community engagement at San Francisco AIDS Foundation, told the Bay Area Reporter that the campaign is "something new and different for PrEP awareness because of the way it centers black communities and real people."

"Without relying on sexy, party images that can put off some folks, these ads are approachable and invite anyone to learn more about PrEP and find out how it could change the way they live and do the things they love," he said.

Bradford added that SFAF, with support from DPH, is working to create a network of people who can spread the word about PrEP in communities where people aren't sure about the medication or who aren't seeing the ads.

"Our PrEP ambassadors initiative is part of the citywide effort to help young people of color figure out if PrEP is right for them," he said. "PrEP ambassadors will join our staff at events, street fairs, and festivals and have the one-on-one conversations that give people a chance to ask about PrEP. Hopefully, we can overcome some of the barriers that stigma has built up around HIV and PrEP."

PrEP is covered by Medi-Cal and most commercial insurance and the city has set up a PrEP emergency fund for youth. Gilead offers patient assistance and copay programs to help people afford Truvada for PrEP. San Francisco City Clinic, all clinics in the San Francisco Health Network, many other providers including the San Francisco AIDS Foundation's Magnet sexual health services at Strut and Kaiser Permanente San Francisco, offer PrEP.

San Francisco's Getting to Zero initiative considers expanded access to PrEP, along with rapid initiation of antiretroviral treatment and retaining HIV-positive people in care, to be a key part of its three-prong strategy to make San Francisco the first city to eliminate new HIV infections, deaths due to HIV/AIDS, and stigma against people living with HIV.

The latest campaign for African-Americans is part of a larger DPH effort to expand PrEP access and services for multiple groups that are underserved and heavily impacted by HIV, including Latinos, youth, and trans women.

"While there is still significant work to do to close the disparities gap, the Getting to Zero initiatives to expand PrEP education and outreach to more communities appear to be making a difference," said Dr. Susan Buchbinder, director of Bridge HIV and a member of the Getting to Zero steering committee.

The campaign is on social media as @PrEPSupports on Instagram and Twitter. Text "askprep" to 21333 for help in English or Spanish.