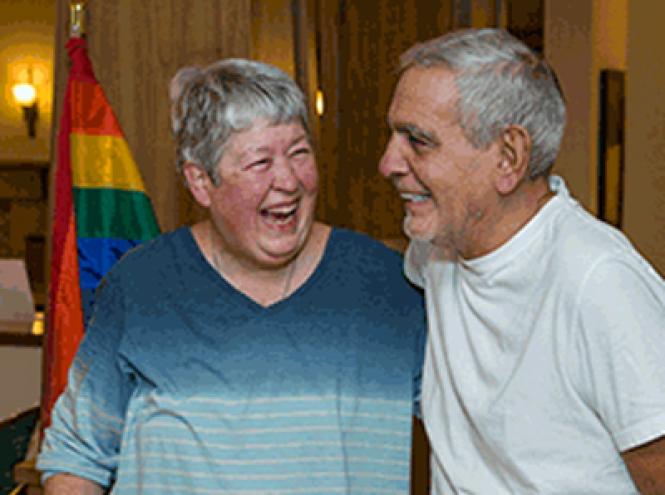 Fountaingrove Lodge residents Sharon Long, left, and Martin Devin celebrated returning to the lodge November 13 after being evacuated for more than a month.  (Source:Bob Stender/Tibidabo Photography)

Residents of the Fountaingrove Lodge, an LGBT senior living facility in Santa Rosa's Fountaingrove neighborhood, were happy to finally return to the lodge November 13, following the October wildfires.

Nearly 100 residents waited anxiously for a little more than a month after fleeing the flames that roared through the Fountaingrove neighborhood and left much of it in smoldering rubble.

The lodge and its apartments were spared by the inferno, leaving it mostly unscarred. Only the edges of the American and rainbow flags that flew at the entrance to the lodge were singed, while the lodge's property itself only suffered some burn marks on the stone along its parameters, Drue Mordecai, senior marketing director at Fountaingrove Lodge, told the Bay Area Reporter.

Mordecai, 52, and a gay man, said that the residents were grateful to be able to return home.

"The miracle is that it still stands. It's a total miracle," said Matile Rothschild, 84, who evacuated with her partner, Joan Zimmerman, 81, to a senior community in Albany.

The B.A.R. attempted to interview some LGBT residents of the communities that were destroyed, but was unsuccessful due to individuals being focused on searching for temporary housing and other immediate needs.

Community made the difference
All of the lodge's residents were successfully evacuated during the early morning hours October 9. An estimated 95 lodge residents, along with 332 residents of the Terraces, Varenna and Villa Capri, were evacuated by bus by Oakmont staff and first responders. Some individuals left in their cars and went to the Costco and Macy's parking lots, said Mordecai and Crystal Robinson, vice president of sales and marketing at Oakmont Management Group, which owns Oakmont Senior Living residences.

Oakmont provides on-site housing for some employees, they said.

Mordecai noted that three of the lodge's residents were on vacation at the time of the northern California wildfires.

Some residents were also evacuated by family members, who were able to access the Fountaingrove neighborhood that morning, according to media reports that questioned evacuation procedures at Oakmont.

Oakmont is currently under investigation by state agencies examining the evacuation of the facilities and unauthorized cleanup before agencies approved owners' entry onto the property.

"We are cooperating fully with investigators," wrote Robinson in an email to the B.A.R.

Mordecai couldn't comment on the investigations, only saying, "The truth will come out" and that the media reports "will be proved wrong."

"Frankly, we saved everyone," continued Mordecai, who had been turned away by authorities at the Fountaingrove Parkway, like other Oakmont management team members. "I have so much respect for so many people that I call heroes now because of what they did."

Lodge residents defended Oakmont when the B.A.R. asked about media reports about the investigations into the evacuation.

"We all got out. That shows that we had a lot of preparedness," said Rothschild.

People at the lodge were prepared as best as they could be for the disaster, many told the B.A.R., describing the heroics of their fellow residents who were floor captains, lodge staff who were on duty, and Mordecai and another manager's quick actions to secure temporary evacuation to New Vintage Church and alert residents and staff.

On the hill, the lodge's residents and staff initiated their evacuation plan with resident floor captains and staff waking residents up and gathering them in the designated meeting place at the lodge.

More than 400 Oakmont seniors were immediately taken to, and welcomed at, the church by pastor Andy Vomsteeg until it, too, was placed on evacuation notice.

"I was kind of scared, but not too panicked because we have a system and it was time to implement it," said Taura Anderson, a 66-year-old lesbian who is one of two of the head floor captains at the lodge. She eventually evacuated to her sister's house in Pinole.

Some residents were alert enough to quickly get dressed and pack to-go bags and grab their car keys, cellphones, and chargers, while others were confused and only showed up at the designated meeting place in their robes and slippers.

The fire was very close to the lodge, residents said.

Two cooks brought the community's van to the front of the lodge and started loading up patients from the adjacent memory care building and some people from the lodge.

Other residents manually opened the garage door to access their cars, residents said.

"As I drove out, it was like nothing I'd seen in my lifetime," said Charles "Ben" Miller, 79, a gay man who transported several other residents to safety. "It almost had a surreal beauty to it because all the moss on the trees was on fire, so the trees were kind of like outlined, silhouetted against the yellow. It was fascinating, but it wasn't fun to drive through."

Rothschild told the B.A.R. that one of the residents who stayed behind with one of the cooks let firemen into the lodge, so they could bypass fences to get to the flames threatening the back of the building.

Many of the seniors temporarily settled in at the church, watching the news projected onto a wall. Groceries were brought in for the cooks and cots were set up by the city of Santa Rosa, while Oakmont staff and church volunteers cared for the seniors.

A few Fountaingrove residents made their way to friends' houses, second homes in San Francisco or elsewhere, or took off in their RVs. Others extended their vacations, said Mordecai and residents who spoke with the B.A.R.

On the afternoon of October 9, family members started picking up their loved ones at the church, while Oakmont management arranged transportation to temporary housing at its other residencies in the East Bay.

Vomsteeg was grateful that the seniors were able to get off the hill and his church was able to welcome them.

"It was great to help our community and just let other people know that we were there for them," he said.

Scattered community
Over the last month, lodge residents expressed their gratitude to Oakmont management and staff, the church, and their fellow community members.

They praised couple William "Bill" Baird and John Kennedy, one of the original Fountaingrove residents. The men, both in their 70s, evacuated to their home in San Francisco and created an online group and website for the lodge.

Anderson said the communication system "really worked for us."

"It's very important for us as a community to be a community," she said.

"Anything in the world that you want to know about the lodge is on that site," said Rothschild. "That has kept us together. It's been absolutely wonderful. It's like we still have a community even though we're all scattered around."

Kennedy noted that the lodge is a special place to live.

"It's a very unique place in terms of a retirement community because we all know each other and really, really missed being together," he said. "It really is a community."

Other LGBT seniors
For other LGBT senior communities in Sonoma County, staying connected with their neighborhoods, and the Sonoma Valley LGBT Seniors Group, emergency alerts, and keeping up with the news was key.

Throughout the crisis the LGBT seniors in the group created a phone tree to check in with everyone and notify each other when friends were located and where people were safely evacuated.

Others told stories about neighbors staying behind and protecting their houses and neighborhoods.

"Yeah, but we are fortunate, so fortunate," Kathy Severns, 69, said about the house she lives in with her wife, Diana Hendrickson, 65. Severns said their 87- and 86-year-old neighbors stood guard, spraying water on all of their neighbors' houses.

The seniors praised the city of Sonoma, where businesses and chefs turned out to "fix all those beautiful meals for all those people," said Hendrickson. "I was like, wow."

The grace that Sonoma County residents overall illustrated during the tragedy inspired and left members of the group in awe.

Janice Farrell, 73, smiled, saying, "The love that we've seen in the outpouring is always there, it's there already, but we don't express it or share it with each other very often. It's only in the face of tragedy."

Looking toward the future
Many claimed that the fire was unusual and that nothing like it happened before, but Cal Fire told ABC News earlier this month that the fire mimicked a blaze in 1964 that took a similar path under similar dry conditions, topography, and high winds, raising questions about rebuilding in the neighborhood.

Yet, people are talking about rebuilding, including lodge residents who are grateful and want to extend their sense of community to the Fountaingrove neighborhood, which was severely damaged.

"We are clearly very fortunate. We know that others were not so," said Anderson.

She, like others, expressed sadness for their neighbors, but hoped that residents of the lodge will contribute to help the Fountaingrove neighborhood rebuild.

Members of the Sonoma LGBT Seniors Group have also already started helping their fellow LGBT seniors who lost everything by making donations. On the day the B.A.R. met with them, they gathered money to help a gay man who lost his home and business in the fire.