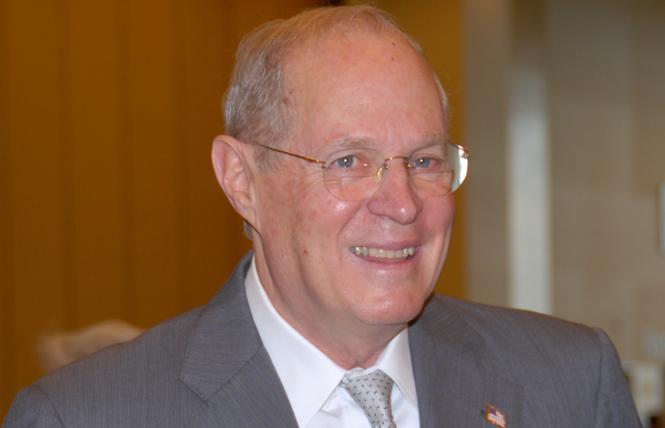 Just two days after Justice Anthony Kennedy announced his retirement from the U.S. Supreme Court, President Donald Trump told reporters that he had already narrowed his choice for Kennedy's replacement to "about five" people, two of whom are women. He said he would interview "six or seven" candidates, all from among the 25 candidates he had previously identified as likely nominees.

Trump said he would announce his choice July 9.

Court observers have been parsing the potential nominees, looking at where they stand on LGBT-related and other issues.

Jeffrey Toobin, a legal analyst for CNN, said on Anderson Cooper's "360" program June 27 that there is "not a hint of moderation" in the candidates Trump is most likely to nominate.

"They are stone-cold conservatives," said Toobin. They are "definitely not Anthony Kennedy's tradition."

Kennedy's tradition, when it came to laws regarding LGBT people, was one that provided the fifth critical vote and an eloquent voice in support of equality and dignity. Kennedy penned the court's major pro-LGBT decisions on marriage, sodomy laws, anti-gay initiatives, and federal benefits.

With the voting records of the remaining eight justices evenly split between those who vote mostly pro-LGBT and those who vote mostly anti-LGBT, Kennedy had become the reliable saving grace. And, being a Reagan appointee, he bucked the expectation that only a justice appointed by a Democratic president would understand and defend the rights of such a stigmatized minority.

The likely short list
The following are five candidates from the list of 25 who are most often identified by major media analysts as the judges Trump is most likely interviewing for the current Supreme Court vacancy.

Among the men are:

Brett M. Kavanaugh, 53, a former clerk to Kennedy and a George W. Bush appointee to the U.S. Circuit Court of Appeals for the District of Columbia. Kavanaugh also clerked for progressive 9th Circuit Chief Judge Alex Kozinski (retired). He married a woman who worked as Bush's personal secretary at the same time Kavanaugh worked in the White House as staff secretary. He was a key player in choosing U.S. Supreme Court nominees for Bush, most of whom were very right-wing. At his own confirmation hearing, then-Senator Ted Kennedy (D-Massachusetts) asked Kavanaugh if he was aware that one of Bush's nominees had made repeated statements hinting that he would not follow precedent. Kavanaugh said he did not personally work on that nomination. In response to a written question from Kennedy, Kavanaugh stated, "Roe v. Wade is binding Supreme Court precedent. If confirmed, I would fairly and faithfully follow and apply all binding Supreme Court precedent, including Roe v. Wade." There are no known LGBT-related decisions in his record.

Thomas M. Hardiman, 52, a Bush appointee to the 3rd Circuit, voted to allow a student to express religious views in school. But in a 2007 case, Prowel v. Wise, he ruled in favor of a gay man who said his boss took adverse action against him because the employee was effeminate. Hardiman said that, just because Congress has declined to explicitly bar discrimination based on sexual orientation, "This does not mean ... that a homosexual individual is barred from bringing a sex discrimination claim under Title VII." Hardiman was reportedly a Trump finalist for the seat made vacant by the death of Antonin Scalia.

Amul R. Thapar, 49, was appointed last year to the 6th Circuit by Trump. During the confirmation process, Senator Chris Coons (D-Delaware) submitted written questions to Thapar, including whether the 14th Amendment requires equal treatment of same-sex couples and transgender people. Thapar said the Supreme Court has consistently held that the amendment applies "beyond race," and he cited the court's 2015 decision in Obergefell v. Hodges, striking bans against same-sex marriages. But he said that its scope beyond that was the subject of "several live cases" before the federal courts, and he declined to comment further. Thapar then concluded, "If an equal-protection case came before me, I would apply the relevant precedent of the Supreme Court and 6th Circuit." When Coons asked him about the "right to privacy" for "two consenting adults, regardless of their sexes or genders," Thapar cited the Supreme Court's decision in Lawrence v. Texas and said, "I will faithfully apply all Supreme Court precedent."

Other potential picks
Court observers have mentioned two women on the list.

Amy Coney Barrett, 46, is a former clerk of Scalia's and a Trump appointee to the 7th Circuit. On Monday, the American Family Association and two other "conservative" groups issued a news release urging Trump to nominate Barrett. During her confirmation, in response to a written question from Senator Dick Durbin (D-Illinois), Barrett said she thinks every judge has an ideological conviction but that "no judge should allow those ideological convictions to dictate the outcome of a case." Senator Dianne Feinstein (D-California) asked Barrett, in a written question, about Obergefell and "If a state or local government official refused to issue a marriage license to a same-sex couple because that official said that doing so would violate their religious liberty, whose rights should prevail? How would you go about evaluating that issue?" Barrett dodged, saying only that she would resolve the issue the same as any other, using standard "judicial process." Feinstein also asked Barrett if she knew about the anti-LGBT sponsorship of a program she gave a speech for. Barrett said she knew the program "supported a traditional view of marriage" but "did not know" that the sponsor, the Alliance Defending Freedom, was working "to end same-sex marriage or recriminalize homosexuality." If confirmed to the 7th Circuit, asked Feinstein, "what will you do to ensure that LGBT litigants appearing before you can have confidence that you will treat them impartially?" Barrett responded that she would "treat all litigants impartially," as required by the judge's oath of office.

Joan L. Larsen, 50, a Trump appointee to the 6th Circuit, is also a former clerk of Scalia's. The Leadership Conference on Civil Rights, which is made up of more than 200 groups, including the Human Rights Campaign, opposed her confirmation to the appeals court. The coalition noted that, as a member of the Michigan Supreme Court, Larsen voted against hearing a lesbian mother's appeal concerning custody and questioned "whether Obergefell v. Hodges compels us to apply our equitable-parent doctrine to custody disputes between same-sex couples who were unconstitutionally prohibited from becoming legally married" before the 2015 Obergefell decision. The coalition noted she also wrote an article criticizing the Supreme Court's decision in Lawrence v. Texas, striking down sodomy laws.

Whoever is Trump's next nominee, he or she has a Republican majority Senate waiting to vote on the confirmation. With Senator John McCain (R-Arizona) out sick, the nominee will need only 50 votes. There was news of a potential slip Sunday in the prospects for those 50 Republican votes: Susan Collins (R-Maine) said she will not support a nominee who seeks to ignore the Supreme Court's precedent in Roe v. Wade, upholding the right of a woman to seek an abortion. Specifically, she said (on CNN's "State of the Union"): "I would not support a nominee who demonstrated hostility to Roe v. Wade because that would mean to me that their judicial philosophy did not include a respect for established decisions, established law."

Collins' expressed concern for "established decisions" suggests she might be averse to a nominee who seemed poised to reverse any of the landmark pro-LGBT decisions that Kennedy led.

Collins said that, in her meeting with Trump about his upcoming nominee, the president told her he would not ask a potential nominee about abortion. But not everyone thinks that means anything.

As Georgetown civil rights law professor Paul Butler said on MSNBC Monday, "It doesn't really matter that he now says that he won't ask [potential nominees] how they feel about Roe v. Wade or LGBT rights because he already knows."