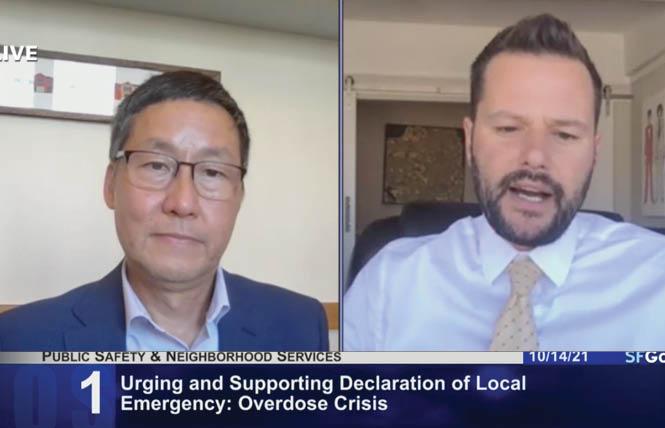 At a virtual hearing October 14, advocates joined District 6 Supervisor Matt Haney in arguing for his resolution urging Mayor London Breed declare a state of emergency around the drug overdose crisis in San Francisco.

"Our response has to meet the challenge that we're facing," Haney declared at the outset of the Board of Supervisors' Public Safety and Neighborhood Services Committee meeting.

At the conclusion of the hearing, committee members District 2 Supervisor Catherine Stefani and District 4 Supervisor Gordon Mar moved to forward the resolution to the full board. (Haney, also a member of the committee, had been excused to go to another meeting.) It is expected to be voted on by the supervisors October 19.

Haney represents District 6, which includes the overdose hotspots of the Tenderloin and South of Market. (He is also running for the state Assembly seat that will soon be vacated when Assemblyman David Chiu becomes San Francisco city attorney.) He introduced a resolution last month urging the mayoral action, as the Bay Area Reporter reported at the time, in order to pave the way for the city to authorize, fund, and implement safe consumption sites.

Safe consumption sites (also called supervised injection facilities) are places where drug users can consume pre-obtained drugs under the eye of trained staff. Advocates argue it is necessary to implement in San Francisco, where the number of drug overdoses has dramatically risen from 259 in 2018 to 712 in 2020 — and is on track for a similar death toll this year.

(The 697 deaths the B.A.R. previously reported were a preliminary number.)

Such support from the city would be necessary to potentially prevent the operators of the site from being prosecuted under the Anti-Drug Abuse Act of 1986. Signed by then-President Ronald Reagan as part of the war on drugs, that law made managing or maintaining a "drug-involved premises" (i.e., where illegal drugs are openly used) a federal crime.

(The penalties enacted in that law were expanded by the Illicit Drug Anti-Proliferation Act of 2003, which was introduced by then-Senator Joe Biden, who is now president, and signed by then-President George W. Bush.)

"We know safe consumption sites work," Haney said during the hearing. "There are hundreds around the world. They prevent overdoses. They prevent disease. ... They help reduce public drug use, and they prevent barriers to care for the people who most need to be reached.

"We believe we have the authority, right now, to move forward with safe consumption sites and we want to express that to our mayor," Haney said.

Laura Thomas, the director of harm reduction for the San Francisco AIDS Foundation, gave a rundown of the context. Thomas reminded the audience that the city's 2017 Safe Injection Services Task Force's top recommendation was to "support the creation of safe injection services in San Francisco" and "recognize the legal and real estate barriers to operating safe injection services and devise necessary contingency plans."

"In order to proceed with operating safe injection services, San Francisco must be deliberate in formulating a way forward for local agencies, community organizations, and building owners that includes local protections and procedures to respond to potential legal repercussions," that report stated.

Thomas said that Rhode Island passed legislation authorizing safe injection sites, with the first expected to open in March. Despite President Biden's past record as a drug warrior, nobody knows how the United States Department of Justice will respond.

"We have a new federal administration," Thomas said, adding that a "legal case out of Philadelphia had initially a very positive ruling and then more recently a negative one."

Thomas was referring to the case of United States v. Safehouse. The Trump-era Justice Department filed a federal lawsuit against the first supervised injection site in the U.S., Safehouse in Philadelphia. A federal judge at trial sided with Safehouse, but the 3rd U.S. Circuit Court of Appeal ruled 2-1 against. On October 13, the U.S. Supreme Court opted not to hear the case, as WCAU-TV reported.

Still, the earliest there may be any such site in California isn't until 2023, Thomas said — necessitating city leaders to push the envelope.

Wiener's bill, which is supported by Breed, would allow San Francisco, Oakland, and Los Angeles to open pilot supervised injection sites, also known as overdose prevention programs, as the B.A.R. previously reported. In July, a legislative committee chair said the Biden Justice Department needed time to develop a position on the legality of such programs.

When asked about the hearing, Wiener, a gay man, told the B.A.R. October 14 that he understands the legal milieu the city would enter by authorizing safe consumption sites on its own accord.

"I'm committed to authorizing safe consumption sites under state law, and I'll work to advance SB 57 next year," Wiener said. "I have no problem with San Francisco confronting this public health crisis by moving forward ahead of the state. Moving forward without state authorization raises various complicated legal issues. I'm confident Mayor Breed — who is a champion for this and other harm reduction strategies — will make a thoughtful decision on how to proceed."

Thomas reminded the hearing's attendees that the city government has taken bold action before without asking permission first. In 1992 under then-Mayor Frank Jordan, San Francisco implemented needle exchange during the height of the AIDS epidemic before the state Legislature would even introduce a bill authorizing such programs.

"This is justifiably a state of emergency," Thomas said about today's crisis. "We want a statement of intention by the city to open services. This would support nonprofits like the San Francisco AIDS Foundation, who'd like to oversee these services but who need legal support."

Mar thanked Thomas and others who showed up to chime in.

"Thank you for all of your work on this urgent and important issue," he said.

Stefani said that she was in favor of the proposal as well, but that it had to be part and parcel of an array of attacks on the root causes of the city's drug overdose epidemic. Stefani began by saying she knows about the drug overdose problem in-depth both because of issues in her own family, and because this is a topic the supervisors talk about "all the time in myriad ways" in hearing after hearing.

"What I cannot ignore is how are people getting these drugs?" Stefani asked. "You can't ignore these issues and hope you are going to address the overdose crisis in San Francisco. ... As we speak, someone blocks away is selling deadly fentanyl. This is part of the ugly equation that is ignored and not addressed."

The precipitous increase of fentanyl in San Francisco's drug supply since 2018 is blamed by city officials for the increase in drug overdose deaths since that time. The San Francisco Police Department seized four times the amount of fentanyl in 2020 than in 2019, according to the New York Times.

Citywide from February through May 2021, 218 of overdose deaths were fentanyl-related, 172 were methamphetamine-related, and 103 were cocaine-related, according to a June 21 report from the medical examiner's office to Breed.

As the B.A.R. reported over the summer and as Stefani mentioned in her remarks, the synthetic opiate is entering stimulants like cocaine. (The two look similar and so cocaine is sometimes cut with fentanyl.)

"We are not protecting people who use drugs when we make it so easy for them to get the drugs that may kill them," Stefani continued. "I don't know why this does not come up.

"I'm for all of it," Stefani said, regarding Haney's resolution. "But what I cannot ignore is the open-air drug market on our streets, just blocks away. ... People are out, selling drugs, and we have to do something about that."

Stefani's office did not respond to a request for comment by press time asking how she'd like to address fentanyl dealing.

No one spoke against Haney's resolution at the hearing, though there was some criticism of law enforcement similar to Stefani's comments.

McCoy told the B.A.R. that "I think Supervisor Stefani has a perspective that's important to her and her constituency, and I agree drug dealing is an issue." But McCoy isn't so sure that the overdose crisis can be solved with a law enforcement solution.

"I know if San Francisco arrested every drug dealer and locked them up today, the same amount of dealers would be on the street tomorrow," McCoy said, adding that the solution has to be "less punitive and more supportive."

McCoy said ultimately the best solution would be to have a safe supply program, providing pharmaceutical-grade drugs to users to "put drug dealers out of business."

McCoy said that he thought the hearing was "wonderful and incredibly informative, especially for folks who might not have been following along after the 2017 task force had its hearing."

"The context is important to remind people of," McCoy said.

Mar and Stefani moved the resolution forward with a non-substantive amendment.

"It's nonbinding," McCoy said. "Whether or not the mayor will support it, my goal is to show the mayor that she has the support to do this, however she wants to do this. The whole city family is behind her."

Breed's office did not respond to a request for comment for this article. On September 28, at a news conference in the Castro, Breed was noncommittal on Haney's resolution, but criticized the idea of the city authorizing safe consumption sites without changes to state law, as the B.A.R. reported.

Breed declared a state of emergency for the COVID-19 pandemic on February 25, 2020, before a single case had been confirmed in San Francisco. In 2020, the city lost more than twice as many people to accidental drug overdoses than to COVID-19.