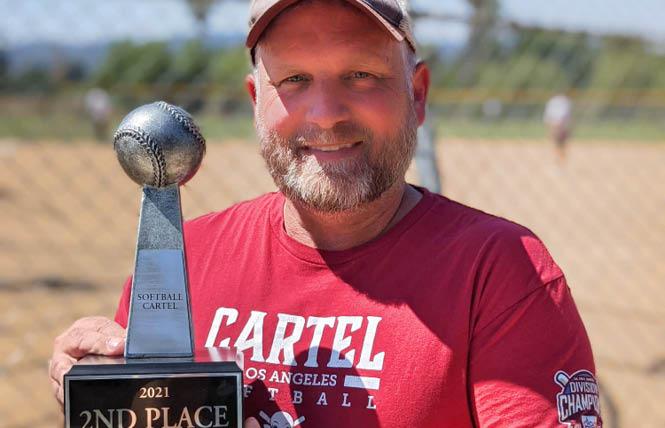 The LGBTQ recreational sports community was rocked this week with the unexpected news that Sin City Classic tournament director Ken Scearce had died.

Mr. Scearce, 48, was found unresponsive in his home in Los Angeles' Toluca Lake district Wednesday, July 7, around 4:30 p.m. Paramedics were unable to revive him and declared him deceased shortly thereafter of an apparent heart attack. An official cause of death is not known.

"He was an extraordinary person and leader," the Sin City Classic board said in a formal statement. "Ken poured his heart and soul into the Sin City Classic. It would not be what it is today without his love, leadership, and dedication. His loss is felt across the country because he cherished relationships with so many of you. Ken was passionate about this festival and we are committed to honoring his incomparable legacy."

Mr. Scearce, a gay man and a national account manager with Encore, was a longtime leader in the Greater Los Angeles Area Softball League and became tournament director of the multi-sport Sin City Classic in 2017. He was inducted in to the North American Gay Amateur Athletic Alliance Hall of Fame in 2014.

"Ken Scearce was an amazing person who brought his incredible spirit and passion to our softball family," said Vincent Fuqua, commissioner of the San Francisco Gay Softball League. "He has been a tremendous support and ally to me and many others over the years. He will truly be missed, yet his spirit lives in all of us."

Kimberly Hadley, sports officer of the Federation of Gay Games, said she had been talking with Mr. Scearce recently about ways in which Sin City Classic and the Gay Games could mutually support each other.

"It's a sad day," Hadley said. "He was a good friend over the years. He truly was a leader in the LGBTQ+ sports community. He really heard what people were saying and wanted nothing but the best for everyone's events. He had a kind heart and genuinely wanted to see everyone succeed. We worked quite closely on various initiatives and in various groups. His wisdom and passion for people will be missed."

Survivors include Ms. Scearce's sister, Tammy Marie Lonas; and his partner of 19 years, Freddie Alvarez. Mr. Scearce and Alvarez had recently bought their condominium and planned to get married later this year.

Larry Potter was a friend and teammate on the GLAASL's Cartel softball team.

"He was a great coach for the team and a great friend," Potter said. "He loved what he was doing."

Jock Talk: Sports events that happened (and didn't) in 2021
Sign up!