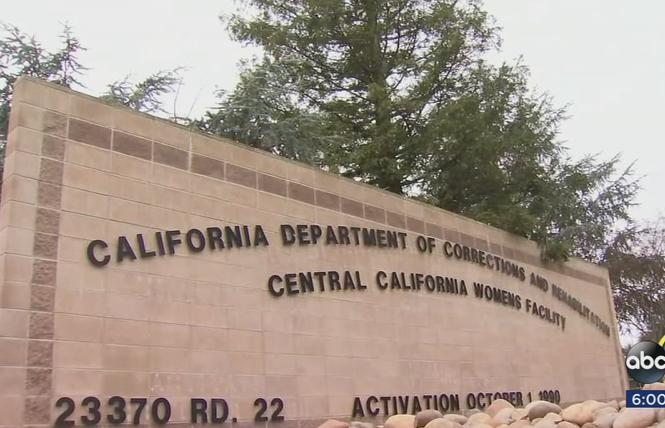 Four women who are incarcerated filed a federal lawsuit against the California Department of Corrections and Rehabilitation November 17, seeking the courts to declare gay state Senator Scott Wiener's Senate Bill 132 unconstitutional under both the state and federal constitutions.

As the Bay Area Reporter previously reported, SB 132 was signed into law by Governor Gavin Newsom last year and went into effect in January. Authored by Wiener (D-San Francisco), it allows incarcerated transgender people to ask for a transfer to a state prison or detention center that matches their gender identity.

The suit, filed in United States District Court for the Eastern District of California in Fresno, is on behalf of four women who are incarcerated and Woman II Woman, a nonprofit by formerly incarcerated women. Woman II Woman published an open letter to "Stop SB 132" earlier this year. The two listed attorneys are Lauren Adams of the Women's Liberation Front and Candice Jackson of Freeman Mathis and Gary, LLP, a San Rafael-based firm.

Adams, the legal director for the Women's Liberation Front, stated that "our four individual plaintiffs are incarcerated at Central California Women's Facility and all have suffered harm from being housed with men, including sexual assault and infringement on civil liberties. WoLF accepted the case because we are dedicated to the rights of women and girls, and we strongly believe that justice-involved women have a right to single-sex prison housing."

Jackson stated, "Women's Liberation Front has been a client of mine since mid-January of this year, and I'm pleased to represent them in their pursuit of law and public policy advocacy for women and girls, including through the claims on behalf of female prisoners raised in this lawsuit."

The civil complaint alleges that SB 132 violates parts of the federal Constitution: the Eighth Amendment's prohibition against cruel and unusual punishment; the First Amendment's protections of freedom of speech and religion, because of the pronoun and honorific requirements; and the 14th Amendment's equal protection clause, because the law allegedly "imposes on female offenders increased risks of physical assault."

The complaint refers to transgender women as men.

"SB 132 converts 'women's facilities' into facilities housing a collection of women, and men with any self-declared 'identity' that is not exclusively male even though such men may (and most do) retain the anatomy, genitalia, and physical characteristics that define them as male-sexed humans," the complaint states. "The reality that men and women are factually, materially, immutably different, in ways that disadvantage women and necessitate attention to women's unique needs, supports protection of incarcerated women by providing women-only correctional facilities."

One of the plaintiffs claims that she was a victim of sexual assault "by a man transferred to her unit under SB 132." Two others, one Roman Catholic and another Muslim, claim that "being placed in an intimate setting with unrelated men" (in the former case) and that being "housed in facilities with men" (in the latter case) violate their rights to practice their religions.

In a statement to the B.A.R. November 23, Wiener blasted the suit, stating that it is part of an effort to attack the legitimacy and rights of trans people.

"We passed SB 132 so that trans people who are incarcerated can be safer and can be who they are," Wiener stated. "SB 132 is about respecting the basic dignity and agency of trans people. The proponents of this lawsuit have a long history of attacking trans people — trying to erase them, denying their existence, and classifying them as scam artists and rapists.

The CDCR turned down a request for comment November 23.

"CDCR has not been served with this lawsuit, nor can it comment on pending litigation," Terry Thornton, a spokeswoman, stated. "However, the department is committed to providing a safe, humane, rehabilitative, and secure environment for all people in its custody. Federal and state laws impose legal obligations related to the treatment of people in custody with specific provisions for gender-nonconforming people. CDCR is deliberate in its review of gender-based housing requests, and they go through a thorough review process."

Slow transfer of prisoners
This spring, CDCR told the B.A.R. that only 26 requests from transgender and gender-nonconforming incarcerated people to move to gender-appropriate facilities had been approved as of May 12, out of 271 requests. Sixteen people had been transferred.

(People who had had gender confirmation surgery were able to transfer "many years" before SB 132, Thornton said.)

When asked for comment, the office of Attorney General Rob Bonta, which will have to defend the state prisons agency in court, stated to the B.A.R. November 23 that "CDCR is our client in this matter. They are best positioned to respond to any related inquiries."

Woman II Woman could not be reached for comment.

This is the second of Wiener's bills aimed at helping the LGBTQ community that is facing a legal challenge. As the B.A.R. reported last week, the California Supreme Court agreed to review a case about the constitutionality of a provision of Wiener's LGBTQ Senior Bill of Rights that requires employees at senior care facilities to address residents by their preferred names and pronouns. A three-judge panel of the state's 3rd District Court of Appeal in Sacramento came to a unanimous decision in July, in the case of Taking Offense v. California, that the requirement is unconstitutional under the First Amendment's protections of freedom of speech and religion.

A hearing date has yet to be set by the state's highest court.

Updated, 11/30/21: This article has been updated with additional comments and the identity of the CDCR spokeswoman.

Trans women prisoners in CA file to intervene in anti-trans lawsuit
Sign up!