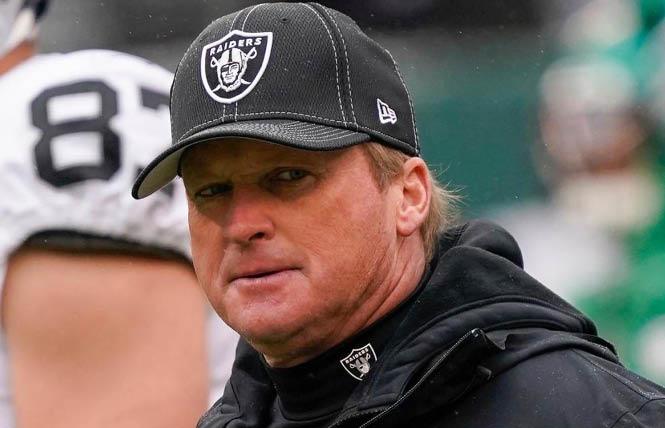 After one of Jon Gruden's racist-laden email exchanges with his NFL buddy Bruce Allen was made public last week, the good old boy spent the weekend hoping his lame-ass non-apology apologies, tone-deaf denials, and meaningless self-deprecation would be enough to allow him to slither forward and retain his position as coach of the Oakland-Los Angeles-Oakland-Las Vegas Raiders football team. When further excavation and publication of the seven-year trove of emails Monday added sexism, transphobia, homophobia, and disregard for player safety to the list of his written offenses, he resigned with six years left on his 10-year, $100 million contract.

Maybe he can take some of that $40 million he already got from the Raiders and meet up with former Los Angeles Clippers owner Donald Sterling so they can cry into their beer as they drown their grievances. They could raise a glass in memory of the late Cincinnati Reds owner Marge Schott. Football, basketball, baseball: prejudice spares no sport, and karma no person.

For me, the worst part of Gruden's emails was not the racist imagery and language he employed to denigrate DeMaurice Smith, head of the players' union, by writing to Allen, the then-president of the Washington NFL team, "Dumboriss Smith has lips the size of Michelin tires."

It was not even the complete disregard for player safety he showed when he damned concussion protocols being adopted by the league to reduce the plague of serious permanent brain disease that occurs so frequently in football. It was not his mocking of Caitlyn Jenner or his suggestion that Tampa Bay Bucs owner Bryan Glazer blow him.

Nor was it when he called NFL Commissioner Roger Goodell a "faggot" or a "clueless anti-football pussy" (as opposed to Joe Biden, vice president at the time, whom he called a "nervous clueless pussy") and said Goodell should not have pressured the St. Louis Rams to draft openly gay defensive player Michael Sam because the NFL should not draft "queers."

Nor was it his damning commentaries opposing female NFL referees, efforts to change the name of the Washington team, or saying that former 49ers player Eric Reid should be fired for kneeling during the national anthem in protest of violent racial injustice.

Initially, Gruden seemed to think he could outlast the storm that arose when just the one racist email deriding Smith was released, telling reporters, "All I can say, is I'm not a racist. I feel good about who I am and what I've done my entire life. I apologize for the insensitive remarks. I had no racial intentions with those remarks at all. I'm not like that at all. I know I don't have an ounce of racism in me."

Some sports commentators bought into that. On NBC's "Football Night in America" broadcast Sunday, anchors Mike Tirico, who said he worked with Gruden at ESPN, and Tony Dungy — both Black men — basically excused Gruden's lapse in judgment and said they did not think he was racist.

But the NFL, which had uncovered the emails while searching through Allen's correspondence as part of its investigation into the toxic work culture within the Washington franchise, had been sending more emails to the Raiders to pressure them to act, and then the dam burst when a flood of the emails were published late Monday by the New York Times and other outlets. Within hours he had resigned.

That's when everyone knew that not only was Gruden really like that, but he had been so consistently for years.

When he thought he was dealing with the revelation of just one email, "Chucky" Gruden tried explaining it away by saying he was stressed out and having a bad day when he wrote it.

Isn't that the same explanation we were offered by law enforcement for the alleged shooter in those spa shootings in the Atlanta area? Yes, it was.

Context
The most damning statement Gruden made was not in his emails: it was when he told the press, "I'm not a racist."

Let's put that in a bit of context.

Sterling was banned for life by the NBA after a recording was released of him telling his girlfriend to avoid socializing with Black people and not to bring any to NBA games, including former Lakers star Magic Johnson.

"I've never been a racist and I'll never be a racist," he said in an interview while struggling, unsuccessfully, to hold on to his ownership of the Clippers.

You know who else said she wasn't a racist? Schott, who kept a swastika armband in her home, called two of her outfielders "million-dollar n——s" and said during a conference call with other baseball owners "I would never hire another n——r. I'd rather have a trained monkey working for me than a n——r."

Yep, not a racist bone in their bodies.

All of these private comments made public have one thing in common: they were not made under duress. They were not words uttered in sudden excitation, heat of the moment, burning passion, or any other unplanned time blip used so often to excuse inexcusable language. These were all people in powerful sports positions speaking their thoughts in their words. They are the most accurate data we have on who they are and how their minds operate.

That issue was reflected in a series of Twitter posts by Smith in response to the revelation of Gruden's email.

"The email from Jon Gruden — and some of the reaction to it — confirms that the fight against racism, racist tropes, and intolerance is not over," he wrote. "This is not about an email as much as it is about a pervasive belief by some that people who look like me can be treated as less. Make no mistake, the news is not about what is said in our private conversation, but what else is said by people who never thought they would be exposed and how they are going to be held to account."

The batch of published emails was written between 2011 and 2018, when Gruden was a commentator on ESPN. Some folks who took offense at the content of the emails cited that time gap to try to cut Gruden a break, arguing that people evolve and are not necessarily now who they were then. They wondered if having an openly gay player on his team, defensive lineman Carl Nassib, would have changed Gruden's outlook.

"In my experience, all it takes is knowing one gay person to change how you feel about the matter because then the issue is humanized," Ryan O'Callaghan, an openly gay former NFL offensive lineman, told USA Today. "People do grow, I believe that. Look at Carl, he's killing it. Would (Gruden) use the same homophobic language knowing about Carl now? Maybe it's changed his impression of gay people."

Then again, I'm pretty sure Gruden has been around women his entire life. I'm pretty sure he'd had a chance to interact with plenty of Black men in his work as a commentator on ESPN and as a coach. Apparently enlightenment from those experiences hadn't rid him of his petty sexism and racism when he was exposing himself via keyboard. I, for one, am happy he will not be in a position of power going forward and making career-changing decisions about other people's lives.