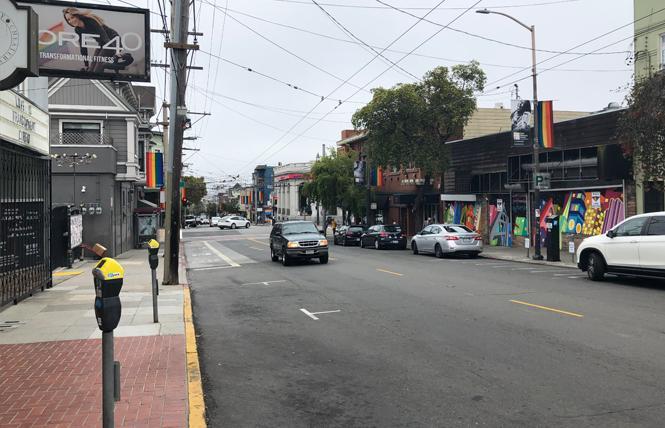 Eighteenth Street in San Francisco's Castro neighborhood will remain open to vehicle traffic as merchants discuss whether to revive the Shared Spaces program that saw a portion of the street closed on weekends. Photo: Matthew S. Bajko

Faced with merchant complaints, the Shared Spaces weekend closure of a portion of 18th Street in San Francisco's LGBTQ Castro neighborhood is on hold for now, a Castro Merchants Association spokesman said Thursday.

Discussion of the topic at the merchants' October 7 meeting revealed that the "vocalized consensus has shifted," according to Nik Blanchet, the community liaison for the association.

It is a marked contrast to the palpable excitement at the heralding of the Shared Spaces street closure last year, before indoor gatherings became safer as COVID-19 vaccines were introduced to the general public. The closure included 18th Street from Collingwood Street to Castro Street and from Hartford Street to Castro Street.

"We are proud that our organization exists for merchant members to voice their opinions on the 18th Street weekend closures, which are made possible through the city's Shared Spaces program," Blanchet stated to the Bay Area Reporter. "The board feels strongly that during the height of the pandemic, when so many small businesses in the neighborhood were suffering, the 18th Street closure brought much needed foot traffic to the Castro, which was an economic boon to all our businesses. For some of our businesses, it was a lifeline."

However, retail merchants such as Patrick Batt, a gay man who owns Auto Erotica on 18th Street, and Terry Asten Bennett, a straight ally who is the general manager and one of the owners of Cliff's Variety on Castro Street, had expressed misgivings. The interruption to regular vehicular traffic and parking patterns put a dent in their sales, they claimed.

Asten Bennett said during the meeting that she is not necessarily opposed to street closures, but "without special programming happening, it doesn't make any sense."

"In its current form — absolutely not," she said. "It's detrimental to residents of the neighborhood; the businesses helped by it already have shared spaces [parklets] and don't need more space while the rest of us are hurting."

As Castro Merchants President Masood Samereie, a straight ally, explained at the outset of the meeting's discussion, there hasn't been a Shared Spaces street closure on 18th Street since July.

"We had a management company — IDK [Events] — running the project for us through the end of July," Samereie said. "We could not come to an agreement and as a result the project was put on hold. We sought new management for the project."

Hoodline reported in August that there were several points of contention between the merchants and IDK Events. IDK Events claimed it was losing money; Samereie said "it's not a matter of costs, it's a matter of someone we can trust."

Scott Shuemake, IDK president, told Hoodline the contract lasted through the end of June. "We were not interested in renewing," said Shuemake.

Samereie held a meeting with area businesses, but said "interest was not there as much as we'd anticipated, so we decided to hold off."

Then, the merchants' permit for the street closure "was suspended. Not revoked, but suspended," Samereie said.

As a result of the lack of interest, followed by the permit suspension and a discussion that yielded only negative feedback about continued closure of 18th Street, the merchants are going to let things be, at least for now.

"We hear that the vocalized consensus has shifted, and many believe the benefits of weekly street closures has already peaked," Blanchet stated. "Therefore, we plan on maintaining an indefinite hold on the weekly 18th Street closures and will allow the permit to remain suspended. We are not entirely releasing the permit because we are still very much in a pandemic with constantly evolving conditions. We will continuously look for ways to support our local businesses through shared spaces and other programs and initiatives."

The street closure allowed restaurants and bars to serve customers outdoors, while allowing patrons to maintain physical distancing in response to the COVID outbreak. At the time the program was first announced, some in the community complained about restaurants and bars serving people too closely together outside on 18th Street's narrow sidewalks. (This was before the large differences between indoor and outdoor risks of contracting COVID, even with close contact with an infected person, were fully understood.)

The street closure launched August 23, 2020; first on both Saturdays and Sundays, and subsequently just on Sundays.

COVID vax hub faces similar complaints
Batt and Asten Bennett also expressed concern about the closure of the parking lot behind the Walgreens at Castro and 18th streets, which is being done for a COVID-19 testing and vaccination hub being spearheaded by the merchants and the Castro LGBTQ Cultural District.

As the B.A.R. previously reported, the district announced a weekly vaccine hub on Noe Street between Market and Beaver streets that grew out of an effort to honor the late LGBTQ activist Marsha P. Johnson. District leaders stated they felt the need to set up the hub due to COVID cases coming out of the Folsom Street Market street fair in late July.

The hub had to move from Noe Street due to complaints from merchants there that it blocked customer access. The San Francisco Department of Public Health subsequently arranged for use of the city parking lot behind Walgreens to provide the services, in consultation with the merchants association and the district.

However, the same customer access problems are now being reported on the west side of the Castro.

"I, along with Patrick [Batt], am very concerned about taking the parking spaces," Asten Bennett said. "I depend on Saturday to pay my bills. ... I have a lot of concern about it because we're at that time of year when we're hoping to catch up, not even break even this year."

Tina Valentin Aguirre, a genderqueer person who is the manager of the cultural district, said that the vaccination and testing hub is making a difference. They recounted the story of an elderly Castro resident who showed up after the hub ran out of vaccines one week, how hard it was to try to get him a vaccine at Walgreens, and how the cultural district was eventually able to procure a jab for him.

"It's not clear when we talk about metrics and parking spaces lost what that means in human terms," Aguirre said.

Asten Bennett reported that she can't afford to replace two employees who've left. She said that perhaps a vacant storefront could be used as the vaccination and testing hub.