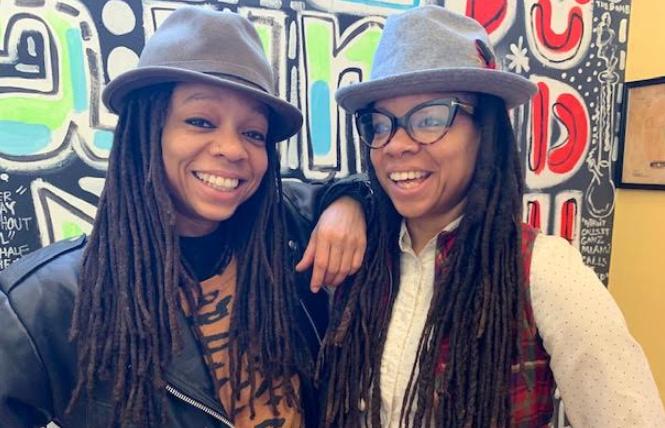 The women, 43, are co-executive directors of the African American Art and Culture Complex in the Western Addition.

The Green sisters were selected via public vote, along with the Oakland LGBTQ Community Center, which was named this year's organizational grand marshal. The San Francisco LGBT Pride Celebration Committee stated that additional grand marshals and other honorees would be announced soon.

The Green sisters are curators, artists, and activists who have produced more than 80 exhibitions and over 100 public events, according to SF Pride.

"They continue to elevate their promise to inspire and empower Black people to tell our stories and uphold our truths," SF Pride stated in its write-up about the women. "Their pride in being Black + queer + women was nurtured in the Bay Area and they are proud to BE, represent, and acknowledge what they fought so hard to not be ashamed of."

Originally from Memphis, Tennessee, the Greens have lived in San Francisco for 20 years and call the Lower Haight home.

The Green sisters did not respond to a request for comment by press time.

Joe Hawkins, executive director of the Oakland center, stated that the nonprofit was "deeply honored" for the recognition.

"Our selection affords us the opportunity to highlight some of the issues that our organization has worked to address since we opened our doors in September of 2017," a statement from the center read. "The COVID-19 pandemic has shined a brighter light on the long-standing racial, social, and economic inequities that that has placed LGBTQ communities of color at greater risk for health and economic problems to include homelessness."

As the Bay Area Reporter previously reported, this year's 51st San Francisco Pride celebration will have some limited, in-person events to celebrate in June. There will not be a traditional Pride parade or celebration in Civic Center Plaza.

The events announced so far by SF Pride will be a Black liberation event scheduled to coincide with the eve of Juneteenth (tentatively June 18), two successive movie nights in Oracle Park, and a Pride Expo at Civic Center Plaza.

The other organizational grand marshal nominees were Krewe de Kinque, a nonprofit? social/charitable club that raises awareness and funds in the spirit of Mardi Gras with an emphasis on diversity, inclusion, and emergency needs; and the San Francisco Bay Area Queer Nightlife Fund, which provides resources and opportunities to promote and support queer nightlife workers during the COVID-19 pandemic.

Town hall to be held on Castro cameras
The Castro/Upper Market Community Benefit District will hold a virtual town hall on its surveillance camera proposal Tuesday, April 27, from 6 to 7:30 p.m.

Billed as a safety program, the project would see 125 cameras installed in the LGBTQ neighborhood. The cameras would be privately funded, according to the CBD.

Not surprisingly, the cameras are opposed by some groups, including the Castro LGBTQ Cultural District and the Harvey Milk LGBTQ Democratic Club. The San Francisco Board of Supervisors in February passed a resolution requiring all special business districts — such as CBDs — to bring any new surveillance plans to the board before adopting new technologies. It is nonbinding, according to an article by the Electronic Frontier Foundation, and will be up to city departments to determine whether and how to carry out such requests. (https://www.eff.org/deeplinks/2021/02/san-francisco-takes-small-step-establish-oversight-over-business-association)

Others support the SafeCity Camera program, as it's called, in part due to petty crime and an uptick in concern from Castro residents about public safety issues.

CBD Executive Director Andrea Aiello stated in an announcement about the meeting that an online survey to assess the neighborhood's interest in the program has been completed.

Aiello said that next week's town hall would be the only one on the topic. Registration is required and can be done by clicking here.

Meeting about SF redistricting
The League of Women Voters will have an online forum Thursday, April 29, at 6 p.m. to help residents learn about the redistricting for San Francisco supervisor seats.

Redrawing the lines of the 11 supervisorial districts takes place every 10 years to create more fair, equitable representation in local government.

During the event, which is free, attendees will hear from Eric McDonnell, who was chair of San Francisco's redistricting task force during the previous 2011 process. He'll talk about why it's important for people to get involved in redrawing the city's map of the districts and what it's like to be a member of the task force.

Helen Hutchison will also address the meeting. She's the statewide lead for the League of Women Voters of California and serves on its board. Hutchison will explain why redistricting matters and what people can expect in 2021.

Updated, 4/19/21: This article has been updated with comments from the Oakland LGBTQ Community Center.