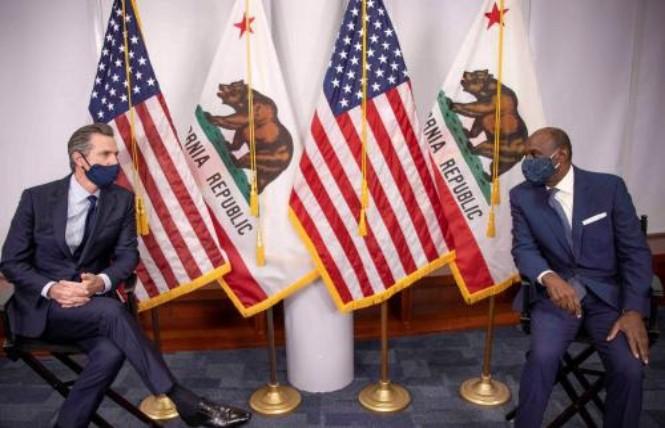 California Governor Gavin Newsom has appointed the first openly LGBTQ person to serve on the state's Supreme Court. Retired Justice Martin Jenkins, who is gay, would be the third Black man to serve on the court, should he be confirmed.

It has been 29 years since an African American man has served on the court, the governor's office noted in announcing Jenkins' appointment Monday, October 5. He has served as Newsom's judicial appointments secretary since 2019.

"Justice Jenkins is widely respected among lawyers and jurists, active in his Oakland community and his faith, and is a decent man to his core," stated Newsom. "As a critical member of my senior leadership team, I've seen firsthand that Justice Jenkins possesses brilliance and humility in equal measure. The people of California could not ask for a better jurist or kinder person to take on this important responsibility."

Jenkins, 66, would fill the vacancy created by the retirement of Associate Justice Ming W. Chin this summer. He stated he was "truly humbled and honored" to be nominated to the state's highest bench by Newsom.

"If confirmed, I will serve with the highest ethical standards that have guided me throughout my career, informed by the law and what I understand to be fair and just," stated Jenkins, a Bay Area native.

"Governor Newsom's appointment of California's first openly gay supreme court justice is a monumental step forward for the LGBTQ+ community and for our entire state," stated EQCA Executive Director Rick Chavez Zbur. "Not only is Justice Jenkins exceptionally qualified and an outstanding choice for California's highest court, but he embodies the values of our great state. Governor Newsom is setting a national example as he works to ensure California's government reflects the diversity of the people they serve."

Jenkins' nomination must be submitted by the governor to the State Bar's Commission on Judicial Nominees Evaluation and confirmed by the Commission on Judicial Appointments. The oversight body consists of Chief Justice Tani Cantil-Sakauye, Attorney General Xavier Becerra and senior Presiding Justice of the state Court of Appeal J. Anthony Kline.

Judge Joseph Quinn, a gay man who serves on the San Francisco Superior Court, has worked with Jenkins as a member of the local regional judicial selection advisory committee that offers feedback to the Newsom administration on potential judicial picks to fill court vacancies. Quinn called Monday's announcement about Jenkins' nomination "a great day for the LGBTQ community!" in a response to the Bay Area Reporter.

"Justice Jenkins is the first out member of the LGBT community to serve on our state's highest court. And that court is the final word on many important issues, like gender equity, equity in schools, workplace fairness and criminal justice reform," noted Quinn, who is married to Jim Humes, an associate justice on the California Court of Appeal, First Appellate Division. "It's critical that our community is at that very important table. And we couldn't have a better voice than Justice Jenkins."

Lesbian Senate President pro Tempore Toni G. Atkins (D-San Diego) also praised Jenkins being selected for the court seat as "an excellent choice" by the governor and called him "someone whose decisions have put law ahead of ideology and someone who has won respect across the political spectrum."

As Newsom's judicial adviser, Jenkins has promoted the spirit of "California for All," added Atkins, and his historic appointment as the first out justice who is also a person of color "helps ensure our system is better reflective of, and more responsive to, all the people of our state as we continue striving for legal, social and economic justice. From his humble beginnings in San Francisco to a career that found him prosecuting the KKK all over the country and guiding the paths of young attorneys back here at home, Justice Jenkins has displayed the thoughtfulness and tenacity that will make him an outstanding addition to our Supreme Court."

USF's current president, the Reverend Paul J. Fitzgerald, S.J., praised his court nomination. He noted that a graduate of its law school had represented Jenkins' mother in a legal dispute.

"I have the highest respect and the deepest admiration for Justice Marty Jenkins," stated Fitzgerald. "His Jesuit education at both Santa Clara University and the University of San Francisco afforded him the intellectual skills and the strength of character to live a life of service and leadership. He is a man of faith, of integrity, of humility and of kindness. As a child, he first witnessed the good that a lawyer can do when a USF law alum took on Marty's mother's personal injury case pro bono, winning damages that allowed her to pay her medical bills. His whole career has modeled that generosity of spirit and that balance of justice and mercy."

At one point Jenkins had signed a contract with the Seattle Seahawks football team but gave up being a professional sports player in order to pursue a career in the legal profession.

"I met Marty over three decades ago when he dropped into my office because he had heard I too played football before making the switch to law. I didn't usually take drop ins but he seemed special and so sincere," recalled retired senior U.S. District Judge of the U.S. District Court, Northern District of California Thelton Henderson. "We talked for hours that day about the law and how to stay connected to the communities we grew up in."

Jenkins, a Democrat like Newsom, started out as a prosecutor for the Alameda County District Attorney's office from 1980 to 1983. He left to work in the U.S. Department of Justice during the Reagan administration as a trial attorney litigating civil rights cases involving police misconduct and cross burnings. He also worked to promote gender equality through cases on pregnancy-related leave and sex discrimination.

Of his former colleague on the bench, Henderson stated, "I can say without a doubt that I have never seen a harder working and more dedicated judicial officer in my entire career. Nobody stayed in the office later than Marty. He was intensely aware that real people's lives were affected by his rulings and wanted to make sure he got it right. That's the kind of man he is. Governor Newsom could not have made a better appointment than Marty."

Quinn recalled that when Jenkins was appointed to the federal bench in San Francisco, he clerked for the judge in the next chambers. And when Jenkins was on the Court of Appeal, Quinn argued several cases before him as an attorney.

"And since he joined the Newsom administration, I've worked with him on judicial appointments. In every context, he was unfailingly humble and kind, he exhibited great empathy and compassion, and demonstrated a keen intellect and a practical understanding of the world," Quinn told the B.A.R. "I, for one, very much appreciate that he's worked at every level of the judiciary — probably more than any other justice in modern history — and always maintained a focus on mentoring and paying it forward. I have every confidence that he'll continue to mentor, particularly people of color and LGBT folks, and increase representation and inclusion in the third branch."