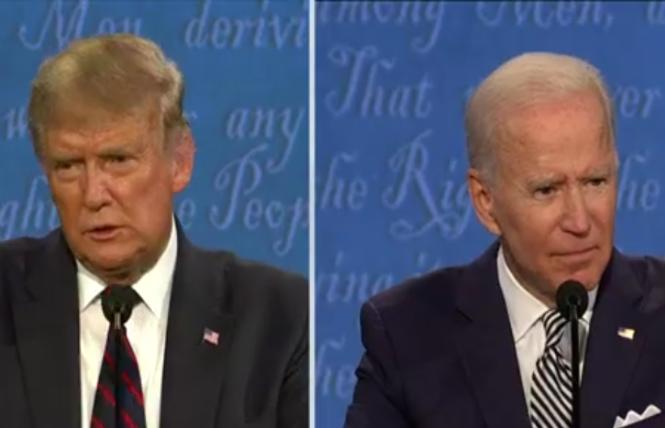 Pressed by Wallace to name one racist organization he could condemn, Trump, the Republican nominee, cited the neo-fascist group Proud Boys, but told them to "Stand back and stand by."

The testy exchange was just one of several during the 90-minute-plus debate in Cleveland, Ohio, where Trump and Democratic nominee former vice president Joe Biden often talked over one another as Wallace, of Fox News, struggled to maintain control.

Wallace touched on many subjects, and led off with the vacancy on the U.S. Supreme Court, to which Trump nominated federal Judge Amy Coney Barrett last Saturday.

The Supreme Court
After the two candidates appeared on stage — they did not shake hands due to the COVID-19 pandemic — Wallace asked each to explain whether it is wise to appoint Barrett to the U.S. Supreme Court before the election.

"Elections have consequences," Trump said. "I think she will be outstanding. She's going to be as good as anybody who has served on that court."

Biden did not dispute elections have consequences but pivoted to how Barrett may rule on a pending case before the court on the Affordable Care Act.

Trump accused Biden of "going to socialist medicine" and proposing eliminating private health care for 130 million people (which is not true) after Biden accused the president of trying to eliminate health care for 100,000 people with pre-existing conditions right now.

Biden accused Trump of trying to undermine Roe v. Wade, saying it was on the ballot.

Trump disputed Wallace's assertion that he had not come up with a plan to replace the Affordable Care Act as the moderator lost control of the debate.

The debate devolved into a tit-for-tat as Biden told Trump to "shut up" after he kept interrupting. "You're just yapping," Biden said.

"We have him on tape saying he knew it was a deadly disease," Biden said, referring to revelations from Bob Woodward's book "Rage." "He waited and waited and waited. He still doesn't have a plan. I laid out exactly in March what we should be doing."

Trump attacked Biden for his past opposition to a travel ban from China, where the viral outbreak started.

"If we would have listened to you, the country would have been left wide-opened, millions of people would have died, not 200,000," Trump said. "You thought it was terrible. You wouldn't have closed it for another two months."

Biden blamed Trump for the recession caused by the COVID-19 shutdowns.

"This is your economy which you shut down," Biden said. "His own CDC said 200,000 more people could die between now and the end of the year."

Wallace said Trump was at odds with top scientists in the administration about the timing of the COVID-19 vaccine.

Biden brought up Trump's past statements about COVID-19 disappearing by Easter, "like a miracle" or with household disinfectants.

"I was being sarcastic, you know that," Trump responded.

"A lot more [people] are gonna die unless you get a lot smarter, a lot quicker," Biden said.

The economy
Trump said that the COVID-19 shutdowns have led to suicide, alcoholism, and depression and therefore states need to reopen.

Biden said that the economic recession has fallen mostly upon middle- and lower-class people while benefiting the wealthy.

"You can't fix the economy unless you fix the COVID crisis," Biden said. "One-in-six [small businesses] is now gone. He has to do the job so we can re-open safely."

Trump was asked by Wallace if it was true, as the New York Times reported, that he only paid $750 in federal personal income taxes in 2016 and 2017.

"Show us your taxes," Biden interjected.

"I don't want to pay tax," Trump said. "Like every other private person, unless you're stupid, you go through the laws and that's what it is."

Biden said tax loopholes were not closed because Trump wasn't "president [and] screwing things up. You're the worst president America has ever had."

"He says he's smart and can take advantage of the tax code," Biden said. "That's why we are going to eliminate the Trump tax cuts and help those who need help."

"They had the slowest economic recovery since 1929," Trump said, threatening that a Biden presidency would mean lower 401Ks and could lead to a depression.

"It's hard to get any word in with this clown," Biden said. "You want to talk about families and ethics? I don't want to do that. His family we could be talking about all night. This is not about my family or his family, this is about your family. He doesn't want to talk about what you need."

Race and violence in cities
Biden said that while America has never accomplished racial equality, "we've never walked away from it" like he has done, mentioning how Trump referred to neo-Nazis in the 2017 Charlottesville, Virginia protests as "very fine people."

"This is a president who has used everything as a dog-whistle to generate racist division," Biden said. "If he doesn't do something quickly 1 in 500 [African Americans] will be killed by the coronavirus. This man is the savior of African Americans?"

Trump brought up the Violent Crime Control and Law Enforcement Act of 1994 crime bill, which Biden co-authored and that many blame for greater mass incarceration of Black Americans.

"You have treated the Black community as bad as anybody in this country," Trump said, before discussing his support among law enforcement.

"We believe in law and order, but you don't," Trump said. "[the radical left] have got you wrapped around their finger, Joe. The people of this country want and demand law and order and you're afraid to say it."

Wallace asked about the lack of indictments in the killing of Breonna Taylor by police in Kentucky after a grand jury completed deliberations last week. Biden said there are racial inequities in criminal justice and reiterated his previous calls against violence in the streets.

"We were paying people hundreds of thousands of dollars to teach very bad ideas and, frankly, very sick ideas. They were training people to hate our country and we are not going to do that," Trump said.

"The fact is that there is racial insensitivity," Biden said. "People have to be made aware of what other people feel like, what insults them, what is demeaning to them. ... This guy and his friends look down on so many people: Irish Catholics like me who grew up in Scranton. People of a different faith, of a different color."

Biden said violent crime declined while he was vice president and increased during Trump's presidency, which Trump blamed on Democratic mayors and governors even though there have been equivalent rises in violent crime in Republican-led cities, as Wallace pointed out.

Trump said Biden would harm suburbs, which Biden said was a "dog whistle."

Biden turned the tables on Trump, accusing him of "defunding the police" by cutting federal funding for local law enforcement.

Wallace asked Biden if he'd advised the Democratic governor of Oregon or mayor of Portland to call in the National Guard after many days of violence.

Biden responded that he's not in elected office right now.

"I've made it clear in my public statements that violence should be prosecuted," Biden said, before Wallace asked the question again.

"Riots and chaos and violence help his [Trump's] cause," Biden said. "That's why he wants to rile everything up, he doesn't want to calm things down. He just pours gasoline on the fire."

The integrity of the election
Wallace asked how confident the American people can be that the election will be fair.

Biden encouraged people to go to www.iwillvote.com and reiterated that federal officials have found that the increased use of mail-in ballots does not carry with it an increased risk of inaccurate results.

"This is about dissuading people from voting," Biden said. "You will determine the outcome of this election. Vote, vote, vote. ... If we get the votes, it's all over. He's not going to stay in power. So vote."

Trump falsely said that the Obama administration attempted a coup in 2016.

"We caught 'em all. We caught 'em all on tape," Trump said. "As far as the ballots are concerned, it's a disaster. ... They're being sent all over the place. ... This is going to be a fraud like you've never seen."

"We might not know for months because these ballots are going to be all over," he said. "It's a fraud and it's a shame. ... It's a rigged election."

Trump said that the Supreme Court, including Barrett if the Senate confirms her, may end up having to decide the election and said they will "look at the ballots."

"There is no evidence of that," Biden said, of Trump's allegations of rigging. "He's just afraid of counting the votes."

Wallace said it is likely we will not know for days or weeks who will win on Election Day. He asked if the candidates would encourage supporters not to engage in civic unrest in that time and not declare victory until the election is independently certified.

Biden did pledge so. Trump did not, and urged his supporters to show up at voting places and watch for fraud.

"If I see tens of thousands of ballots being manipulated, I'm not going along with that," Trump said. "It means you've got a fraudulent election."

"He has no idea what he's talking about," Biden said. "He will too, and you know why? When the winner is declared after all the votes are counted, that'll be the end of it."