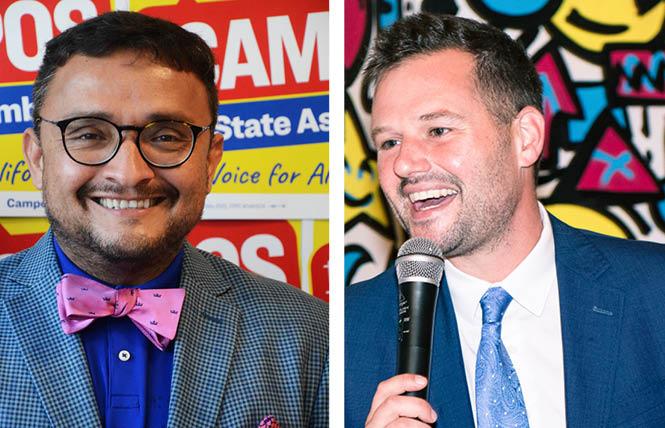 With California lawmakers advancing a bill to create a universal health care system in the state, the issue has the two leading candidates in the special election for a San Francisco state Assembly seat sparring over who would be a stronger advocate for the legislation in Sacramento.

While Governor Gavin Newsom has spoken in favor of universal health care, it remains to be seen if he will support either piece of legislation. Nor is it clear if the paired bills will survive the Assembly Appropriations Committee, which is now chaired by Assemblymember Chris Holden (D-Pasadena).

In the meantime, the issue has become a flashpoint between District 6 Supervisor Matt Haney, a straight ally, and gay former District 9 supervisor David Campos as they campaign for the open 17th Assembly District seat on the ballot for the February 15 special election. Former assemblymember David Chiu resigned in November when he became San Francisco's first Asian American city attorney.

Also seeking the seat are City College of San Francisco trustee Thea Selby and former Obama administration staffer Bilal Mahmood, who are both straight. It is widely believed that none of the four will receive the 50%-plus-one vote needed to win the seat outright next month, with Campos and Haney expected to advance to the April 19 runoff election.

Days prior to the Assembly committee vote on AB 1400, Campos' campaign in an email to its supporters attacked Haney as being in the pocket of "the massive medical lobby" that seeks to "kill Medicare for All in California." It warned attack ads targeting Campos "are about to flood your mailboxes and screens" in an attempt to bolster the electoral chances of "David's corporate-backed rival, Matt Haney, the Supervisor representing the Tenderloin."

It added, "There's a sad irony in the anti-Medicare for All lobby attacking David Campos, AD17's strongest champion for quality, affordable health care for all, while at the same time supporting Supervisor Matt Haney, who is presiding over one of the worst health crises in our city's history — the shocking epidemic of overdose deaths in the Tenderloin, which continues with no end in sight."

According to state campaign finance filings available online as of January 14, the only reported funding by outside groups in opposition of Campos was roughly $1,480 for online ads by the Coalition To Grow San Francisco — Grow SF PAC. The moderate group focuses on city issues and includes airport commissioner Jane Natoli, a transgender woman, on its board.

A number of unions, labor groups, and lobbying organizations have reported donating tens of thousands of dollars in support of Haney's Assembly bid, with $45,000 coming from the California Dental Association Independent Expenditure PAC. The dentists' lobbying group is listed as being opposed to AB 1400.

Asked about the email during an editorial board meeting with the Bay Area Reporter January 7 just hours after it was sent out, Haney called it "silliness and it is dishonest," criticizing Campos' campaign for going negative. He told the B.A.R. he is not accepting donations to his campaign from any big corporations or the pharmaceutical industry.

"This is not the kind of politics our city wants in our next assemblymember. This kind of name calling and attacks, people are tired of," said Haney, adding that he intends to remain positive about his opponents in the race. "It is sad he is doing that. He knows those things aren't true."

Not only did Haney add that he is a "very vocal backer and supporter of Medicare for All," but he pointed out that he has the endorsement of Kalra, who chairs the Legislative Progressive Caucus, in the race.

"That shows you how ridiculous that attack is," said Haney.

Kalra not only has endorsed Haney in the race but also plans to campaign for him January 29 at a mobilization in Mission Dolores Park set to begin at 9 a.m. that Saturday. It is the culmination of a series of campaign events that Haney is holding this month to "make sure voters in San Francisco know who is going to be their champion for Medicare for All," according to an email Haney's campaign sent out January 12.

Prominently featured in the email is Kalra, who is quoted as saying, "Matt earned my sole endorsement because he has a track record of supporting Medicare for All, co-sponsoring a resolution in support of the bill and passing Mental Health SF to provide universal mental health care for all San Franciscans. His determination and creative leadership are exactly what we need in the State Assembly."

Also speaking to the B.A.R. editorial board the Friday that his campaign email hit inboxes, Campos denied his campaign had gone negative over the issue. He pointed out that passing the CalCare legislation is "critical" for protecting the health of the LGBTQ community.

"I don't think it is inaccurate to say he is supported by the medical establishment. Look at the donations he has received," said Campos. "The reality is that people supporting him are people who have stood in the way of this very important legislation."

"We are letting voters know what is happening so they understand when someone says, 'I am for something,' they also know the people supporting that individual have a history of being against what this individual says they are for," said Campos.

Voting starts soon
The AD 17 seat covers the city's eastern neighborhoods, including LGBTQ districts in the Castro, Tenderloin, and South of Market. The winner of the special election will serve out Chiu's term through this December and needs to run for a full two-year term first in the June 7 primary then on the November ballot.

Voters began receiving their ballots in their mailboxes last week. People can also vote at City Hall starting Tuesday, January 18. The last day to register to vote in order to receive a ballot in the mail is January 31, otherwise people can do so in person at the polling places that will be open on Election Day.

Also on the special election ballot is the recall of San Francisco school board President Gabriela López and Commissioners Faauuga Moliga and Alison Collins. Appointed Assessor Recorder Joaquín Torres is also seeking to serve out the remainder of his term through early January 2023.

The B.A.R.'s editorial board last week endorsed Campos and Torres, while also recommending the recall of all three school board members.