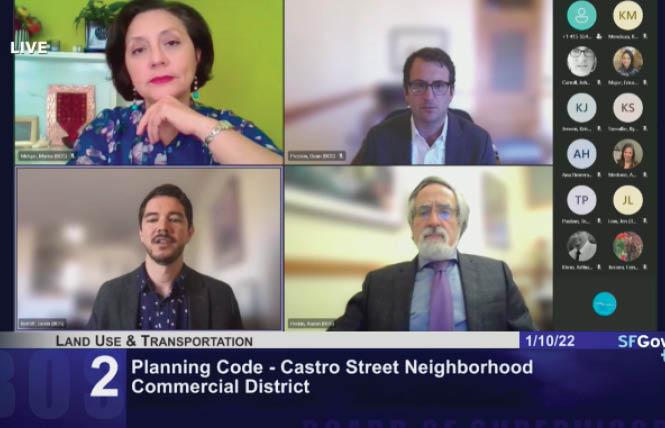 A panel of San Francisco supervisors recommended approval of legislation that would allow additional bars in the Castro neighborhood: the final step before the full board votes on the item January 11.

As the Bay Area Reporter previously reported, gay District 8 Supervisor Rafael Mandelman introduced the legislation October 19 after a prospective wine bar owner, Suzie Jennings, was told she could not open up in the Castro Street neighborhood commercial district, or NCD.

Jennings, a lesbian, had wanted the wine bar in the old Unionmade location at 493 Sanchez Street at the corner of 18th Street. However, new bar locations have been barred in the NCD since its inception in 1987, and so Jennings was turned down.

The 493 Sanchez Street location is currently being renovated for use as a Pilates studio by Bright Star Pilates and Gyrotonic Studio, according to workers who said December 21 that they are renovating the floor for that purpose. The studio told the B.A.R. it hopes to be permanently housed in the space. Jennings has not returned messages seeking comment on what her future plans may be.

Jacob Bintliff, a gay legislative aide to Mandelman, told the supervisors' Land Use and Transportation Committee January 10 that this incident was the genesis of Mandelman's proposed legislation.

"This is fine for those bars in the Castro, which we love," Bintliff said. "But it's not a great thing for this lesbian small business owner and others like her."

He had pointed out to the planning commission last month that "queer folks, trans people, and people of color" are effectively sidelined from opening new establishments under the existing rules.

The proposed legislation will change bars' status from not being permitted at all to being permitted conditionally. Thus, any new such business would need to seek a conditional use permit from the city's planning commission in order to open its doors, prompting a review process where the public could weigh in on the matter.

"The prevailing sentiment, supervisors, is it doesn't seem fair to preclude new folks ... from opening new bars," Bintliff said. "This is especially true in a neighborhood with a high level of retail vacancy."

Bintliff said that if adopted, the legislation would make the Castro's rules "consistent with how bars are zoned in other neighborhoods of the city."

Audrey Merlone, a senior legislative planner with the planning department, attended the virtual meeting to say that the planning commission unanimously approved the legislation December 16. She had no additional presentation.

None of the members of the Land Use and Transportation Committee — Chair and District 7 Supervisor Myrna Melgar, District 3 Supervisor Aaron Peskin, and District 5 Supervisor Dean Preston — had any comments of their own to add before public comment.

Castro resident Jesse Oliver Sanford was the only person to speak during the time allotted to public comment. Sanford said that "San Francisco visitors endure ongoing pain and trauma because, inevitably, white male ownership [of Castro bars] filters down to the behavior of staff, performers, and guests."

"The Castro should be a sanctuary for all LGBTQ people," he concluded.

The legislation passed the committee unanimously.

Bintliff told the B.A.R. that the legislation will be voted on by the full board January 11, followed by a final procedural vote January 25.